The Golden Ratio, usually denoted by the Greek letter ϕ (phi), has the propensity of popping up where least expected, in a variety of natural phenomena and works of art. In its decimal representation, ϕ is equal to the never-repeating, never-ending number 1.6180339887... Where can such an irrational number show up in astronomy? First, it appears in an astronomical symbol. Most people use the pentagram -- the five-pointed star (Figure 1) -- as a symbol for a star (this reflects the twinkling of stars due to the Earth's atmosphere). In the pentagram, in each one of the five side triangles, the ratio of the side to the base is precisely equal to ϕ. Second, when Plato wanted to discuss the cosmos as a whole in his celebrated Timaeus, he chose the dodecahedron (Figure 2) as the shape "which the god used for embroidering the constellations on the whole heaven." The dodecahedron has the Golden Ratio written all over it. If you take a dodecahedron with an edge length of 1 unit, its volume is equal to 5ϕ/(6 - 2ϕ) units. In a surprising turn of events, in 2003 a few cosmologists proposed that some observations of the "afterglow of creation" -- the cosmic microwave background -- could be explained if the universe is in fact finite, and shaped like a dodecahedron! It would have been truly amusing if Plato were right after all. However, more detailed analyses of the data indicate that the universe is infinite and geometrically flat. 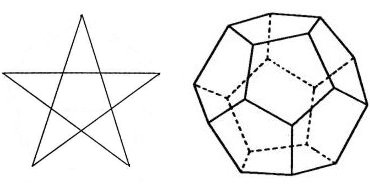 Figure 1. A pentagram. Figure 2. A dodecahedron.

Another intriguing area of astronomy in which the Golden Ratio made an unexpected appearance is that of the extreme objects we call black holes. Black holes warp space in their vicinity so much that in Einstein's classical General Relativity, nothing can escape from them, not even light. However, when quantum effects are brought into the picture, black holes can lose energy via a process known as Hawking radiation. Black holes are characterized by two physical properties, their mass and their angular momentum (a measure of how fast they are spinning). Spinning black holes (called Kerr black holes, after the New Zealander physicist Roy Kerr) can exist in two states: one in which they heat up when they lose energy (negative specific heat), and one in which they cool down (positive specific heat). They can also transition from one state into the other, in the same way that water can freeze to form ice. Believe it or not, but the transition takes place when the square of the black hole mass (in the appropriate units) is precisely equal to ϕ times the square of its spin!

Finally, it turns out that the Golden Ratio happens to be optimal for the design of certain radio telescopes. The goal of such telescopes is to place radio antennas so as to uniformly sample the visibility plane, avoiding overlapping and redundancy. The fact that the Golden Ratio is ideal for this task has already been "discovered" by many plants in their leaf arrangement. The leaves along a twig of a plant tend to grow in positions that would optimize their exposure to the Sun, air, and rain. This is best achieved when the angle between successive leaves equals the "Golden Angle" of 137.5 degrees, which is 360/ϕ subtracted from a full circle. One can show mathematically that the Golden Angle allows for the most efficient filling of space without overlapping.

Amazing, isn't it, for one number to connect black holes to the telescopes that observe them? Figure 3 shows a powerful jet emanating from the center of a disk surrounding the supermassive black hole at the heart of the galaxy M87. 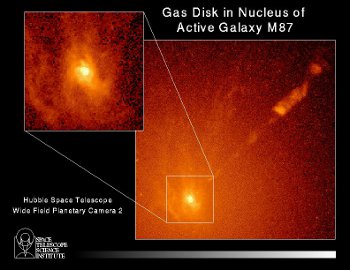