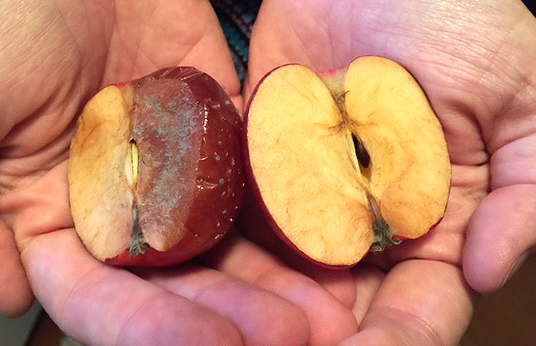 My life partner, our 7-year-old son, and I recently conducted an experiment to see how words might physically effect our bodies. Our son had recently started developing a habit of saying mean things to himself when feeling down -- like, "I'm stupid." And "I'm the worst." My partner and I had been trying to get through to him that saying unkind things to ourselves (as well as to others) leaves a damaging impact. But, he just wasn't "getting it."

And then I remembered having seen the amazing results of a fascinating experiment DanielleLaPorte conducted with her family -- where they talked smack to one half of an apple for a certain period of days, and loved up the other half. Admittedly, I felt somewhat skeptical about whether or not we could achieve the same results. But we decided to go ahead and give it a try.

To start the experiment, we took a fresh apple, cut it in half, and placed each half in a separate, airtight jar. We labeled one of the halves "Good Apple" and the other "Bad Apple," and we left both sealed jars on a dark shelf in the corner of the kitchen.

And Good Apple was still good enough to eat.

Sticks and stones might break bones, but words can definitely hurt...

We generally don't see the negative results of our language choices manifested in overt, physical ways -- so it can be challenging to be aware of their consequences (especially when they're directed inward)... As a mindfulness geek -- and someone with a loud inner-critic -- I can't help but wonder what type of damage we must be doing to ourselves when we fall into the unconscious habitual patterns of criticizing and berating ourselves regularly, instead of loving ourselves up.

After seeing the physical results of his negative words and energy revealed in this experiment, our son is finally starting to "get it."

A version of this blog post was originally published on TheMindfulnessDiaries.com.

Join The Mindfulness Diaries communities on Google+ and Facebook.