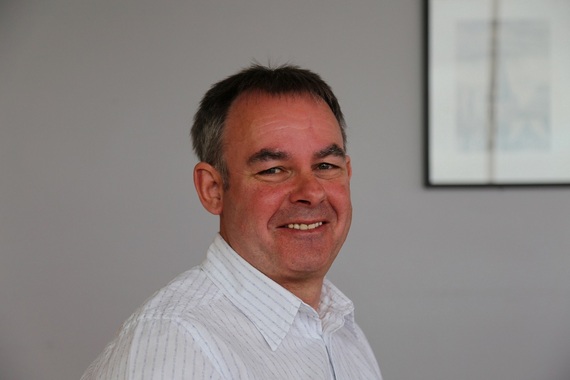 Nicholas Searle grew up in Cornwall and studied languages at the Universities of Bath and Göttingen. After teaching for four years, he moved to London to join the Civil Service, holding a variety of positions dealing with security matters before going to work in a similar capacity for the New Zealand government. In 2011, he returned to the UK, left the Civil Service and began writing fiction. The Good Liar is his first novel.

The Good Liar features con artist Roy, who spots an easy mark when he meets Betty, a wealthy widow. In no time at all, he's moved into her cottage and is preparing to accompany her on a romantic trip to Europe. Betty's grandson disapproves of their blossoming relationship. Roy is sure this scheme will be successful.

Spanning nearly a century, The Good Liar takes the reader on a journey with Roy and Betty, culminating in a stunning endgame when Roy's crooked plot plays out.

The Good Liar has an intriguing premise about a confidence man's scheme, and about lies people tell. What was the impetus for writing the novel?
I came across a man who proved to be the model for Roy. The scenario with him is not dissimilar to what you see in the first chapter of The Good Liar. A distant relative of mine met this man via an online dating service for elderly people. He charmed her very much, and moved in to her home by the time I met him. I was both fascinated and horrified by him because he was an inveterate liar, but was also a pretty poor liar, as well. Each of his lies was easily picked up and he was often inconsistent. I didn't like him at all.

That was the initial impetus for the book. The character Betty isn't remotely based on my relative.

By the time I began writing, I'd met the real 'Roy's' children, who had many stories to tell about his life, all of which confirmed my assumptions about him.

None of the real 'Roy's' history is like the fictional Roy's. Aside from the core of the first chapter of the book, the rest of the plot and structure of the novel distilled in my imagination.

Much of The Good Liar is written in the present tense. What made you decide on that form?
There are two reasons. I decided to write the forward motion narrative in the present tense and the back story in the past tense to delineate between the two. But I also think it brings home the immediacy of what's going on in the narrative. Secondly, it adds to the tension since the reader feels, 'I don't know what's going to happen next.' I want the reader to be immersed in what's currently happening.

The Good Liar is your first novel and has been published after a full career in the Civil Service. Tell us about that.
I worked in public service for a number of years on a variety of things and with a fantastic group of people. I had to learn to write succinctly and concisely, with a good deal of precision. Much of my career was based on writing in a dispassionate way. As a fiction writer, I had to learn how to write with expression and feeling.

Did you always harbor the wish to write fiction?
Yes, from the earliest of ages. In a sense, it's not regret, but when one comes to a point in the road such as I have, you do think about the decision you made to become involved in an all-embracing and busy career. Before I entered Civil Service, I had aspirations to be a writer. I can remember even at seven or eight years old I wrote crazy little storybooks for my younger sister. English was always one of my favorite subjects in school. I loved immersing myself in literature. After university, I took the course of embarking on my career. I made some desultory attempts at writing in my spare time, but I was never happy with the results.

The Good Liar has been compared by some to Ian McEwan's Atonement. Aside from the literary style of the writing, what other parallels do you see in the two novels?
I see some thematic parallels. I didn't see them until I'd written the book. I wouldn't be happy if the book was considered to be derivative of Atonement. In terms of feeling, I do like when a novel goes to and fro between time and place, which is a common strand between the two. I also like the way a novel can look at a life and then when the life is nearing its conclusion, there's a coming to terms or there's a protagonist's reaching a kind of reckoning. It's something common to the two novels. Of course, the emphasis is different in the two books: in The Good Liar, there's a stark division between good and evil, while Atonement doesn't have so separate a moral strand running through it. The characters in Atonement are not drawn in such an absolute moral or immoral way. In Atonement, the main character's internal trials are more about her own morality rather than her dealing with objective rights or wrongs.

The writing in The Good Liar is quite lyrical. Who are your literary influences?
My influences come from all directions. I could not give you a favorite writer; but, among my favorites are Graham Greene, John Le Carre, Ian McEwen, Julian Barnes, and Kate Atkinson. I really enjoy reading many American writers including Richard Ford, Raymond Chandler, and Patricia Highsmith. French and German writers have also influenced me, particularly Albert Camus, and Heinrich Boll.

I love writers who have both economy of expression but also achieve great impact with their words. Many of the writers whose work I love cross genres. They write what I would call hybrids, crossing literary writing with thrillers. They don't write in any particular genre. They simply write good books.

What's the most important lesson you learned about writing?
I've read articles such as ones giving ten tips for writers, and things like that. I shy away from that sort of advice, but two things have stayed with me about writing. They come from my own personal experience in writing.

I've learned how to read novels as a writer. I'm sure you know what I mean being a published author yourself. I've learned how to read and pick apart what the writer is actually doing. It can interfere with the reading experience because you do have to maintain a little distance and hover above the page rather than immerse yourself in the story.

The corollary of that is I've learned to write like a prospective reader. As I'm writing, I ask myself, 'Would I like to read this page, this paragraph, this sentence or even this word?'

I've also learned that the act of writing must involve a solid ability to remain completely conscious, to be ice-cold about your own work. You can go through patches where you produce what you think is wonderful prose, but when you look at it the next day, you're appalled. It's important to be able to distance one's self and ask, 'Why am I using this particular word, or this specific tense?' You have to remain conscious of what you're doing. As long as you're making deliberate decisions, there are no real rules. You simply want to be in control and have complete awareness about what you're writing and what you're trying to achieve.

What's coming next from Nicholas Searle?
I'm preparing my next book, but I don't even have a name for it as yet. I have a first draft completed. I can't at this moment discuss the theme of this novel, but it deals with similar issues as in The Good Liar. There are a number of layers and surprises.

Congratulations on penning The Good Liar, a beautifully-written novel of suspense and intrigue dealing with sin, salvation, and survival.