I once asked my grandmother why they are called 'movies,' and she said 'because they are supposed to move you.' Today, I remember this quote as I've just seen one of the year's best and most moving films, The Good Lie. A film that most people I know sadly haven't even heard of even though it's been on the big screen for weeks and now seems to be vanishing from cinemas. If you love great films, not merely good, but great films, with life-changing stories, seek out The Good Lie this week before it disappears. You'll be glad you did. My friends and I drove 45 minutes from Los Angeles (where we live) to get to the nearest cinema (Torrance) still showing the film. It was well worth the drive.

Though The Good Lie unfolds in 1983 Sudan, this is a universal story -- relevant everywhere, and told with a poetry and emotional richness rarely seen in multiplexes. Tattered survivors, displaced by human atrocities, who have no choice but to persevere in the harshest of conditions -- it is an adventure tale of the highest caliber. And despite its quiet box office so far, I take it as a very hopeful sign for the future of American filmmaking that The Good Lie is playing in the same cinema as Teenage Mutant Ninja Turtles.

So how did this film, which should be an awards season frontrunner, manage to pass through the nation's cinemas under the radar? For one, the trailer, the poster, and the marketing campaign all missed the boat. This is not "a Reese Witherspoon movie" -- a'la Sweet Home Alabama as the poster suggests. Yes, Reese is in it -- and it may be her best work ever (not kidding - her performance is worth the admission price alone), but despite her enormous smiling mug on the poster (confusing since her character's not even all that smiley), she's a fraction of the film's epic puzzle. Also why is her hair in the poster a golden color when in the film she's a brunette? Is this a poster for a Hallmark Channel movie? Where is the excitement and tension and fear that I felt? Just as baffling is the fact that all the actual leads, African refugees whose unforgettable story carries the film, are miniscule in scale to Reese's giant smiling head. That's Hollywood for you. 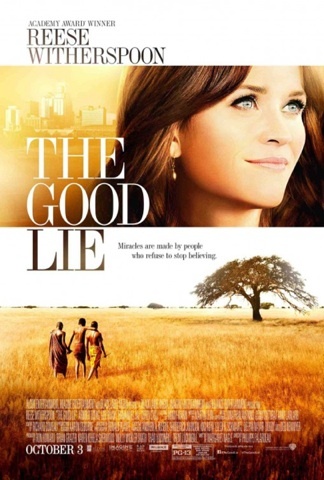 Poster and marketing aside, this film excels on every level with the crowning achievement being WGA Award winner Margaret Nagle's screenplay -- a remarkable feat in storytelling. This is the year's most significant film about family and home. I hope all efforts involved, particularly the writing, and Arnold Oceng as the heroic Mamere, is remembered come awards season. This was not a simple tale to tell - and it took over a decade to make the movie. Spanning decades of brutal history across two continents, The Good Lie is never once cloying, preachy, or convoluted. Nagle nails it. As does director Philippe Falardeau, and the producing team, which includes Ron Howard and Brian Grazer. The lead roles were cast with real Sundanese refugees - talk about casting going the extra mile -- Bravo!

And speaking of going the extra mile, the film has set up The Good Lie Fund to aid South Sudanese children in crisis and Lost Boys and Girls' communities. The Good Lie Fund is partnering with trusted agencies already providing humanitarian and educational support.

Don't wait -- or you may miss one of the best films of the year -- and it needs to be seen on the big screen. Check your local listings for showtimes and cinemas.