"That's My Momma!" James Andrews said of the Baby Doll dancing during his New Orleans Jazz and Heritage Festival set. His show was a family affair, with wife Karen Gant-Andrews belting out an "At Last" that would have done Etta James proud. Andrews' grandfather was musician Jesse Hill, known for the New Orleans hit Oo Poo Pa Doo with its line: "I won't stop trying til I create a disturbance in your mind." With the ever-ebullient Andrews shouting: "Shake what your momma gave you!" to his momma Lois as she did just that, mission accomplished.

It was a day of showmanship. A Lady Gaga impersonator front and center at the Gentilly Stage had his or her cheetah print umbrella, impeccable blond wig and attitude ready for Tony Bennett and Lady Gaga's closing show. And that was before noon as the temperature edged into the upper 80s.

Grammy winner and UNICEF goodwill ambassador Angélique Kidjo created a ripple in the crowd dancing through the audience, and by the end of her rollicking set a sizable chunk of the audience was pulled up onstage and dancing along with her. The powerhouse from Benin's raised eyebrow at the man grinding out The Alligator on the Congo Square stage in front of her was worth the price of admission. 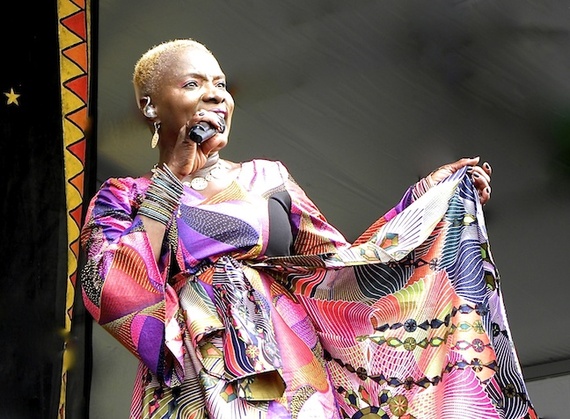 "This song is about the end of the world so let's dance like this," said Sweet Crude's frontwoman Alexis Marceaux to a crowd braving the mud flats in front of the Fais Do Do stage, continuing the dancing theme. New Orleans R&B queen Irma Thomas held court with "It's Raining," on the one day the rain finally held off.

Across the field, New Orleans legend Allen Toussaint parked his blue Rolls Royce stage-side, complete with license plate that reads: Songs. He earned the vanity plate, tearing through his hits "Working in a Coal Mine", "Certain Girl", "Southern Nights", "Mother-in-Law" and many more resplendent in a blue sequined suit. His backup singers The Allettes took a fierce star turn on "Lady Marmalade." The politically timely "Who's Gonna Help a Brother Get Further" ended with Toussaint's nod to his co-writer: "Elvis Costello sends his regards." 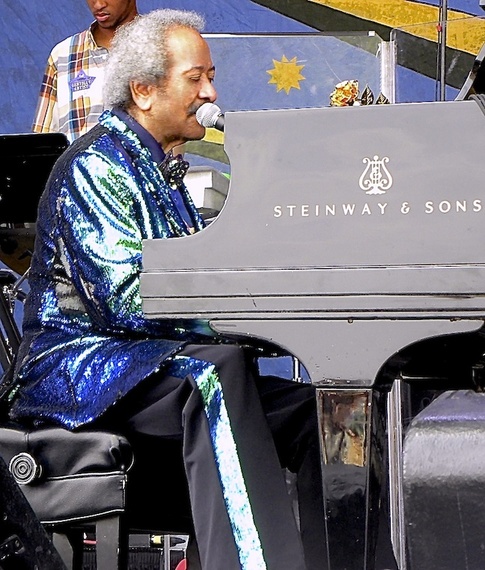 Toussaint was followed by Tony Bennett and Lady Gaga, a duo who packed the audience all the way back to the edge of the racetrack. Bennett belted out his hits from "For Once in My Life" to The Good Life," followed by Lady Gaga's dreamscape version of "Bang Bang" and, of course, their duets. Bennett joked that everyone in the crowd ought to buy one of the duo's album Cheek to Cheek "because she really needs the money." If that's true, Lady Gaga spent it on clothes. Her costume changes were continual - a bold move in a sweaty festival setting.

As the crowd continued to bottleneck I headed home to nurse a sunburn and play the weekend's music on a continual mental loop - one way to wrap the day when the good life is creating the right kind of disturbance in your mind. 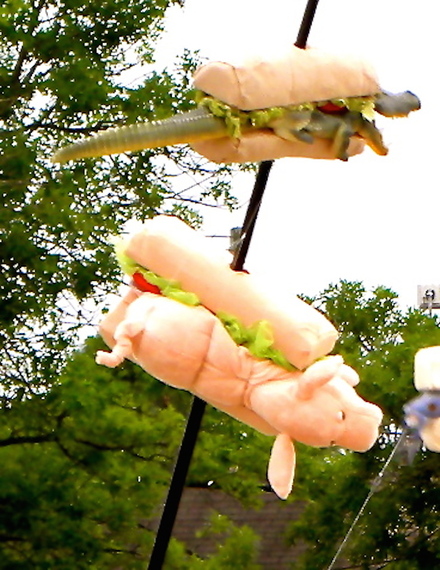 Lagniappe - Sandwiches on a String