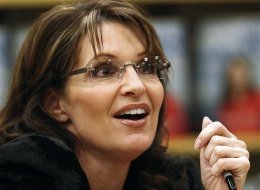 "...The former governor went to great and sometimes awkward lengths to insist that when conservative talk show host Rush Limbaugh used the same exact term to describe the same exact group, it was simply in the role of political humorist.

Yes, of course there is. And it's very simple math:

If (Person) says (Thing Sarah Doesn't Like) is (Righter Than or Equal To) Palin, it's fine.

If (Different Person) says (Thing Sarah Doesn't Like) is (Left Of) Palin, it's the worst thing in the whole wide world.

See? Rush is a satirist. Then again, so is Letterman. However:

See how simple that is? Was what Letterman said insensitive? Sure.

Substitute Letterman with Glenn Beck, and the formula states she's laughing with him, not calling for his head.

It's the most basic of math - no calculator required. Which is what makes it so awesome.

Never before has there been somebody so clearly hypocritical, so obviously agenda-based, and so unabashedly opportunistic in her demagoguery and indignance that a person is left with only one of two choices: Reject it, because it's a double standard, or accept it and be the double standard.

Watching her moral outrage collapse like a deck chair when she had to decide whether to criticize someone she needs - to stay beloved, to remain in the news, to run for President in 2012 - this is a priceless and teachable moment.

Americans can be divided by a lot of things: Politics, religion, race, gender, sexual orientation, war, national security... the list is mind-boggling.

They can be divided by the use of the word "Retard," which was just used in The Fantastic Four - Enjoy The Debate Here - as a young girl calls her less intelligent little brother the word in a teasing and loving way. To be honest, even I found that a little off-putting.

You name the issue, everyone from individual Americans to screaming pundits on Fox News or MSNBC will be lobbing verbal grenades at each other. And that's fine.

I will naively say that left or right, a person can have a strong opinion - one that can be hopefully debated like adults (regardless of how little that seems to be happening these days). If that opinion is consistent, you might not like it... but you should try to at respect it.

(Person) plus (Incident) does not always equal (Same Opinion)...