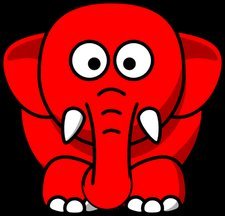 To the Chairman of the Republican Party:

As the official mascot of the GOP, I hereby revoke permission for my image, including photos of my trunk, tusks or either of my ears -- or those of any of my fellow pachyderms -- to be shown on your campaign buttons, posters, T-shirts or coffee mugs.

Even though the GOP has been our family meal ticket for generations, I resign. I am no longer your political animal. I'm proud to say that in the glory days, we elephants were chosen to symbolize the Republican Party because of our dignity, nobility and okay, because we are huge. (But unlike a certain Donald, when would an elephant boast about the size of his tusks?)

Like my father and grandfather before me, I have dozed off through countless mind-numbing campaign speeches. (Luckily, elephants can sleep standing up, so nobody notices.) Now I wish the speeches were more boring! Instead of platitudes, I hear put-downs! Potshots! Profanity!

When it comes to the Donald, I'm sick and tired of being the elephant in the room. I refuse to end up as part of his slick, gold-plated shtick. And so I lift my trunk to trumpet my resignation. I'm outta here. Time for the GOP to rebrand with another mascot! Okay, the donkey is taken and so is the bald eagle, but what about the pig? On second thought, scratch that idea: I've been told that swine are intelligent animals.

They say an elephant never forgets. If only I could forget the day I met him at his cheesy Mar-a-Lago estate. I had to duck to avoid the crystal chandeliers and watch my step to keep from tripping over pink flamingos. The Trumpster made his grand entrance and fed me a few lousy peanuts, strictly for the photo op. Once the Fox News crew left, he gobbled down the rest of my peanuts himself! It was all I could do not to stomp him then and there, squash him like a bug! "You like 'huge'?" I thought. "I'll show you 'huge'!" But no, I controlled myself. We elephants learn restraint at an early age. My mother taught me, "Because we are the largest, mightiest animals on earth, we must be gentle giants, not bullies." So what gives a bloated billionaire the right to throw his weight around more recklessly than a six-ton pachyderm?

Make no mistake, I'm not going to retire to leaf through my scrapbooks and wallow like a hippo in memories of the good old days. I refuse to live in the past, even if the GOP insists on doing just that. No, I've decided to run away to a place where they behave with a lot more dignity and decorum than in the Republican Party. I'm speaking, of course, about the circus. Yes, I know they've announced that elephants won't be performing under the big top at Ringling Brothers anymore -- it's considered inhumane to make us roll a giant ball with our trunks or waddle around on our hind legs. But believe me, that's a lot less humiliating than being forced to twerk for the Donald like I'm just another one of his bimbos.

So send in the clowns! I look forward to my new career working with a bunch of professionals wearing red Bozo noses and ridiculous floppy shoes, buffoons who slip on banana peels for a living. They may only have graduated from Clown College, but they still know more about grownup behavior than the orange-tufted Trump. Clowns throw custard pies, but they don't hurl schoolyard insults. They squirt each other with seltzer bottles, but they don't blast each other with bigotry!

Circus clowns don't try to be something they're not. They just want to make people laugh. They don't have delusions of grandeur like the clown who thinks he's going to get himself elected President of the United States.