The defense industry and its Republican allies in Congress are up in arms -- metaphorically speaking, of course -- over the possibility that an agreement which the GOP signed might actually take effect as agreed.

They hate when then happens. So they're cooking something up that could create big problems for your wallet ... not to mention your digestive tract.

Republicans routinely express contempt at the thought of using government funds to save jobs. But when it comes to defense spending, they want us to know that government funds should be used to save jobs. For their part, defense contractors just want our money. So, in what appears to be a coordinated plan, Lockheed Martin threatened to send out fraudulent "layoff notices" to over one hundred thousand employees, while its minions in Congress simultaneously demand that the Pentagon do the same.

We'll need to send out a few hundred million more notices if they succeed -- including a warning about the E. Coli outbreaks their plans likely to create. Drop those hamburgers, kids! Lockheed Martin wants a few more billion from your Mommies and Daddies.

Nobody knows if the sequestration process will be triggered, or where and how the mandated cuts would be applied to if it were. Nevertheless, Lockheed Martin CEO Robert "Bob" Stevens told Congress that "a very rough 'seat of the pants' estimate is that we might be required to lay off about 10,000 employees."

But since Mr. Stevens has absolutely no information on the nature of those cuts, that figure must have been pulled out of something inside those pants.

Stevens goes on to claim that sequestration's "reductions... are likely to trigger the law (called) the WARN Act -- requiring 60 days or more advanced notification in certain locations before workers can be laid off. But since we don't know exactly who will be affected," says Stevens, "our best judgment is that we may have to notify a substantially higher number of our employees ... that they may not have a job if sequestration takes place."

Stevens says that the law forces Lockheed Martin to send layoff notices to most of its 123,000 workers, many of whom just happen to live in battleground electoral states -- even though most of them won't be laid off, according to Lockheed's own beneath-the-seat-of-the-pants scenario. And the media's taking the bait. "Virginia Voters Ask Whom to Blame for Defense Cut Risk," said Bloomberg BusinessWeek in a typical headline.

There's only one problem: Lockheed Martin CEO Bob Stevens may be lying. And unless he's an incompetent executive with an equally incompetent legal team, he knows he's probably lying.

Here's what the WARN Act actually says: "An employer may order a plant closing or mass layoff before the conclusion of the 60-day period if the closing or mass layoff is caused by business circumstances that were not reasonably foreseeable as of the time that notice would have been required." (Emphasis ours.)

Since the outcome of the sequestration process isn't "reasonably foreseeable," Lockheed and other defense contractors aren't obliged to send notices to anybody. And since Lockheed made it clear that more than 90 percent of the employees receiving those notices would not be laid off, even under its own hypothetical and hyper-hysterical scenario, the unlucky 1 in 10 won't even know who they are -- which means nobody would be receiving a genuine layoff notice. They'd just be frightened and intimidated, right in time for Election Day. That's why the Labor Department has stated that it would be "inappropriate" to send out layoff notices under these circumstances.

Word to a company whose motto is "We never forget who we're working for": I think you forgot something.

The Lockheed Martin lie was part of a broader offensive which is based on what seems to be a new tactic: terrorizing working people, in a time of high unemployment, purely for political and financial gain.

While Bob Martin was pulling his little scam House Republicans were pressing a Defense Department official to acknowledge that, if the Pentagon were to lay off civilian employees, it would also have to send out layoff notices before the election. They then scolded the official, however, when he explained that no layoffs were currently being planned.

"The anxiety is building on a daily basis," said Virginian Republican Rep. Rob Wittman, a member of the House Armed Services Committee. But Wittman's not on record as expressing any "anxiety" over the loss of jobs, children's health services, or other important services from sequestration's non-defense cuts. In fact, he seems to have faced these possibilities with considerable equanimity.

Sequestration was always a dumb idea, and Democrats should've known from past experience that Republicans would welsh on the deal anyway.Now the GOP wants to increase defense spending well above previously agreed-upon levels, while slashing all other government spending to well below the original deal's already dangerously-low limits. The Center for Budget and Policy Priorities (CBPP) shows us what they have in mind: 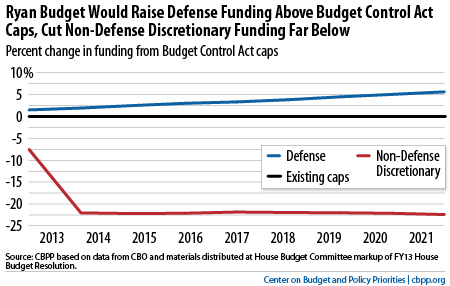 For all their caterwauling about lost defense jobs, far more jobs will already be lost in other areas under the current plan -- and their proposed changes would make those losses rise even further. A
study
by Sen. Tom Harkin notes that sequestration's $2.7 billion in lost federal education grants would force "46,349 employees to either lose their jobs or rely on cash-strapped States and localities to pick up their salaries instead."

Sen. Harkin also notes that under fhs current sequestration plan, "659,476 fewer people would be tested for HIV, 48,845 fewer women would be screened for cancer; and 211,958 fewer children be vaccinated." Harkin adds:

"At a time when the unemployment rate is still above 8 percent, 1.6 million fewer adults, dislocated workers and at-risk youth would receive job training, education and employment services; and the families of 80,000 fewer children would receive child care subsidies, making it harder for parents to find work."

Those figures won't stop fthe defense industry's Hill shills from bemoaning "lost jobs" -- even as they work to make real job losses even greater to further enrich their military-industrial patrons. A number of studies have shown that defense spending produces fewer jobs per dollar than other government programs. A 2007 study by the University of Massachussetts, reaffirmed and updated in 2011, demonstrated that military expenditures produced far fewer American jobs per billion dollars than did spending for education, health, or clean energy. 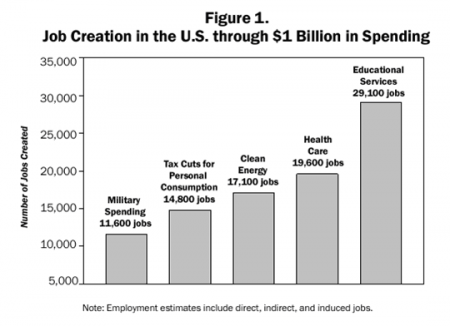 But never mind. The defense industry and its minions keep crying over "jobs" anyway. In fact, the Congressional Record is still damp from crocodile tears.

Now the Republican House has upped the ante by passing a bill which demands that the President publicly reveal exactly how he would achieve the cuts required by the sequestration process. We're all for transparency -- but don't stop there, Congress! The House should now pass a law forcing itself to answer questions about its own budget, such as:

When do you plan to provide details on your budget's extreme, partially-concealed cuts to Medicare? They include raising the Medicare eligibility age and drastically lowering the amount of funds it will have available on a per-person basis.

When will you provide details on your budget's $1.9 trillion in cuts to the social safety net -- including your plan to keep civil order in the wake of widespread disease and deprivation?

Why do you call your budget a "deficit reduction" plan when, despite its massive spending cuts, the Congressional Budget Office says it won't produce a surplust until the year 2040 -- more than a quarter-century from now?

What kind of nation do you foresee in the year 2050 -- when, as the CBPP explains, "most of the federal government aside from Social Security, health care, and defense would cease to exist"?

Your budget imposes all these drastic cuts on the public, yet would keep the Bush tax cuts for millionaires -- and, incredibly, would also give them an average of $265,000 in additional tax breaks. When and how sill se new jobs as a result of this "stimulus spending through the tax code"?

Dear GOP: Since you were so eager to have the Pentagon send layoff notices in battleground political states, I'm sure you'll agree that other government agencies should start sending out notices too -- especially if your radical changes to the already reckless sequestration plan are passed. Here are a few suggestions:

3,700,000 Teacher Layoff Notices: We'll need Lockheed Martin, Bob Stevens-style "layoff notices" to 3.7 million elementary and secondary school teachers. Most of them won't be laid off, but ... well, Bob can explain this one for you.

Several Hundred Thousand Latchkey Kid Notices: We'll also need to send notices to hundreds of thousands of working parents explaining that they may not have day care services after January. That means they'll either have to quit their jobs or become parents to a new generation of latchkey children.

21,800,000 Million No Care For Veterans Notices: We'll also need to send notices to all 21.8 million veterans of our armed forces, informing that they may not receive the medical services they need. We'll also need to send Lockheed-style "layoff notices" to the VA's 285,000 employees since, in Bob Martin's words, "we don't know exactly who will be affected (so) we may have to notify a substantially higher number of our employees."

As a freebie, we'll allow all Republican Representatives to include a personal letter with these notices. They can use it to explain how much they "support our troops."

311 Million 'Better Start Worrying About Your Social Security and Medicare' Notices: Then we'll need notices for all current and future recipients of Social Security, Medicare, Medicaid and unemployment insurance -- the first two alone include every citizen of the United States -- that they may not receive their checks. (Sequestration doesn't cut these programs' benefits, but it does their administrative budgets. Your check may get cut -- but it may sit on a desk somewhere for a long, long time.)

Several Million Private Businesses' Smackdown Notice: For you private-sector enthusiasts, we'll need notices for all the employees of private businesses which may downsize or close altogether -- A lot of businesses depend on income from teachers and parents who have jobs, veterans who are well enough to live a full life, and people who depend on Social Security, Medicare, and unemployment.

These private-enterprise layoff notices will to have to go out to grocery stores, doctors' offices, auto dealers, movie theaters, restaurants, clothing retailers ... well, the non-defense side of sequestration will hurt pretty much every real business in the country - except yacht dealerships.

And Lockheed Martin, of course.

311 Million 'Gut-Bombs, New Diseases, and Deadly Foods' Notices: Then there are those E. coli notices we told you about -- along with the potentially lethal effects of other un-inspected food and drugs, the result of sequestration cuts to food and drug safety and inspection programs. In fact, we might as well just broadcast these announcements 24/7 on every channel, since nothing's going to be safe to eat or drink anymore unless you watched it grow yourself.

And lastly, it looks like we're going to need ...

Several Dozen 'Need Help Writing Notices' Notices: As you can see, House Republicans, we've got a big job ahead of us. There are thousands of different notices to write and time's a-wastin'. We're going to need all the help we can get. -- experience in writing scary warnings preferred.

So could one of you guys call Bob Martin over at Lockheed? It's true that his"layoff notice" was a phony, while these warnings will be genuine. But at least he's got some relevant work experience -- and we're pretty sure you have his number.