This is the fifth and final post in a series about the prospects for an international climate agreement this year. The first four can be found in my Huffington Post archive.

With their sights on the White House in 2016, Republicans say they will use their control of Congress to prove they can govern. But with voter confidence so low, what evidence would be convincing?

Merely carrying out custodial duties like passing the federal budget on time without shutting down the government would be refreshing, but it would not be sufficient evidence of governance. It would be more convincing if Republicans resolved an issue of major national and international importance, especially one where congressional action has been stalled by partisan or procedural gridlock.

Climate change comes readily to mind. It would be shocking in a good way if Republicans reversed course and took meaningful action in the next 10 months to reign in the nation's carbon emissions. That way the United States could hold its head up high when it joins the rest of the international community in Paris next December to strike a deal on controlling carbon emissions.

There are other perplexing issues waiting for congressional action, but none would be more solid evidence that the Republican Party is interested in and capable of governing. It has become a cliché but nonetheless true that global warming is the most consequential and complex issue facing this generation -- or any in history, for that matter. Members of the party's rational wing would have to show they could take back control from the GOP's rationally challenged members. Breaking the partisan impasse would demonstrate that the party is capable of bipartisanship on big issues. And it would show that Republicans are able to put the national interest ahead of the powerful lobbies that oppose any action on global warming, including those that usually fill the GOP's campaign coffers.

The beauty part is that Republicans could do the turnaround without compromising their core values. Quite the opposite: Global warming offers conservatives an opportunity to show that they remain true to their values even on the most difficult issues. For example:

Controlling federal spending: Government outlays on weather disasters alone already are climbing. Unless we are prepared to force disaster victims and communities to cope with weather disasters on their own, and to allow damaged infrastructure to go unrepaired, we cannot manage government spending without managing the risks of climate change. Former Treasury Secretary Robert Rubin warns, "The longer we wait, the greater the cost." The current Treasury Secretary, Jacob Lew, estimates that the cost of trying to mitigate global warming rises 40 percent with each decade of delay.

Climate risks are rapidly growing past the point where we can manage them. Last year alone in the United States, there were eight weather and climate events whose damages exceeded $1 billion. Floods, still America's number-one weather-related disaster, have pushed the federal flood insurance program into a $23-billion debt. As I write this, and with plenty of winter still on the way, the city of Boston has already spent more than $30 million on snow removal. This winter's blizzards, which some evidence suggests are more severe partly because of climate change, are expected to cost the nation as much as $2 billion. In short, when drought, wildfires, floods, hurricanes, heat waves and other extreme weather events get out of control, so does federal spending.

Letting energy markets work: Assigning a price to carbon would help take care of that. Right now, energy markets are flawed. Price signals are distorted because they don't include the cost of carbon emissions or a variety of other social, health and environmental impacts. A carbon price (perhaps we should we call it a National Security Surcharge or a Biospheric Sin Tax) would help energy markets work more efficiently.

Even the world's biggest oil companies acknowledge the need for a carbon price. In its latest analyses of long-term energy trends, British Petroleum (BP) concludes that the need to encourage a variety of solutions to carbon emissions "underpins the importance of policymakers taking steps that lead to a meaningful global price for carbon." ExxonMobil has supported a carbon tax for years; in 2009 CEO Rex Tillerson called it "the most efficient means of reflecting the cost of carbon in in all economic decisions."

Creating jobs: It has become a conservative mantra that transitioning to clean energy would be a job killer. It's not true. That's why several Republican governors are advocates of renewable energy development.

While the State Department estimates that the Keystone XL Pipeline would create only 35 permanent jobs, the Solar Foundation reports that there are more than 173,000 solar jobs in the United States right now, many of them in conservative states. The top 10 states for solar job growth include Arizona, Nevada, North Carolina, Florida and Ohio. In Texas jobs in the solar sector have grown by 68 percent in one year. 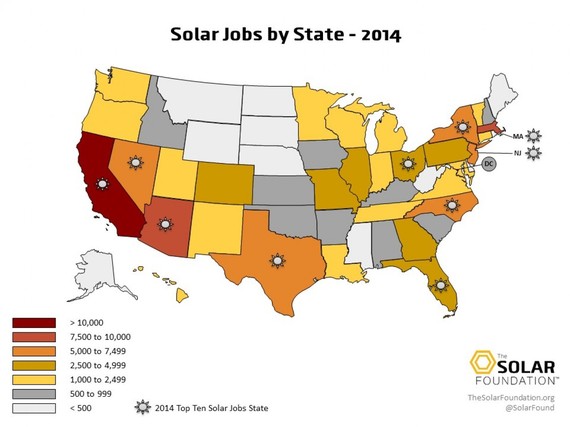 Research at the University of Massachusetts Amherst, supported by an analysis of 15 other studies, shows that clean energy creates three times more jobs per dollar of investment than fossil energy does.

Achieving energy independence: Only energy efficiency and domestic renewable energy resources can get us close, and as it happens, they are what we need to reduce greenhouse gas emissions. Anyone from the "Drill, baby, drill!" chorus who thought we could produce our way to independence should have been enlightened by the recent fall in oil prices. While experts attribute the drop to several factors, an important one was OPEC's decision to keep its oil flowing. Combined with the U.S. fracking frenzy and more-efficient vehicles, the decision put enough oil on the market to create a rapid drop in price and a seismic shock for U.S. producers. So far there has been no credible evidence that OPEC has figured out how to manipulate the price of sunbeams or wind.

Representing constituents: The acquiescence of GOP leaders to climate deniers has put the party out of synch with its constituents as well as reality. The Pew Research Center reported last month that a majority of Americans, 60 percent, believes that developing alternative energy is more important than expanding fossil energy production. Pew found that 64 percent (including 67 percent of independents and 47 percent of Republicans) favor stricter limits on power plant emissions.

And while it didn't ask specifically about climate change, a poll by Rasmussen Reports earlier this month found that 66 percent of likely voters believe that most members of Congress don't care what their constituents think.

Protecting national security: Asked to identify the most important job of the federal government, most conservatives would pick protecting national security. Military and intelligence leaders have concluded for years now that climate change and fossil energy dependence are "threat multipliers." They say that climate change is expected to result in international instability, failed states and humanitarian crises, all affecting national security and in some cases requiring the deployment of U.S. military forces. These conclusions are supported not only by current military leaders but by retired senior officers who cannot be accused of taking their marching orders from the current commander in chief.

A convincing first step in proving their ability to govern would be for Republicans who once acknowledged climate change and now deny it to become prodigals by returning to positions they held prior to 2008. In that presidential election year, the GOP's platform referenced climate change nine times, including this statement:

The same human economic activity that has brought freedom and opportunity to billions has also increased the amount of carbon in the atmosphere. While the scope and long-term consequences of this are the subject of ongoing scientific research, common sense dictates that the United States should take measured and reasonable steps today to reduce any impact on the environment. Those steps, if consistent with our global competitiveness will also be good for our national security, our energy independence and our economy.

The platform went on to urge that the "power of scientific know-how and competitive markets" be mobilized to "decrease emissions, reduce excess greenhouse gases in the atmosphere, increase energy efficiency, mitigate the impact of climate change where it occurs, and maximize any ancillary benefits climate change might offer for the economy."

Among the party leaders who went on record acknowledging climate change were George W. Bush, Tim Pawlenty, Mike Huckabee, Lindsey Graham, John McCain, Mitt Romney, New Gingrich, John Huntsman and Sarah Palin. Republicans considering a run for the presidency next year so far are either denying that climate change is an issue or are trying to avoid it altogether.

Those Republicans who would be uncomfortable flipping after they flopped could quote Emerson's observation that "[a] foolish consistency is the hobgoblin of little minds." Or they could explain that while they are not scientists, there is a chance, however small, that those who are scientists will turn out to be right. Protecting the American people against major risks is one of the things responsible leaders do.

If the party wants to prove it can govern, this is the way to do it. But the clock is ticking on its opportunity to seize the moment.