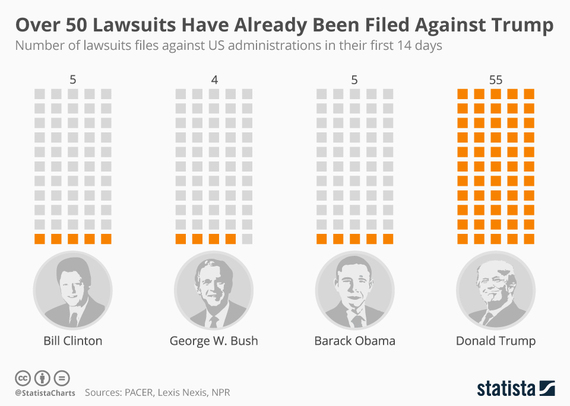 Anyone who still cares about open government, compliance with the nation's laws, ethical behavior and good governance should watch Congress closely in the weeks and months ahead. We will soon learn whether the Republicans who control the Legislative Branch are willing to fulfill their constitutional obligation to ensure that a president - even a president from their own party - does not abuse his office.

The same obligation applies to the Judicial Branch, but for the last eight years it has been Republican leaders in Congress who seem to have forgotten why they were there. From the time in 2010 that Senate Majority Leader Mitch McConnell said the top priority for Republicans was to deny Barack Obama a second term, they acted as if they were elected solely to win more elections rather than to solve the nation's problems.

With few exceptions, virtually everything Obama tried to do during his eight years in office was dead on arrival on Capitol Hill. By October 2011, Obama announced, ""We can't wait for Congress to do its job, so where they won't act, I will." The result, loudly protested by Republican leaders, was Obama's governance by executive order.

If you talk to the aging congressmen who served around 40 years ago, most will remember wistfully when the top priority of the two political parties was to govern well, often by working together. Today, the political warfare typical of election years does not stop during the off-years. It has become a 24/7/365 contest for political dominance rather than an honest clash of ideas. What many of us remember most about the last two sessions of Congress is the shutdown of the government, the 500 filibusters in the Senate, and the endless show-votes in both chambers merely to position members for reelection.

With Republicans soon to be in control of all three branches of government, the question is whether they now will govern responsibly and with integrity. The early signs are not promising. One of the new Congress's first acts was an effort by House Republicans to weaken the office that investigates allegations of congressional misconduct. That calls into question how Congress would deal with misconduct by President Trump and his team.

When it comes to betrayals of the public's trust, Congress's biggest test will be to make sure there are none by the President. Whether it's because he is new to government and unfamiliar with its standards, or because he is so used to autocratic rule in his business empire, or because he thinks his supporters don't care whether he behaves ethically and lawfully, Trump already has entangled himself in questionable behaviors. I don't need to be more specific; Trump's behavior dominates every news cycle. It's enough to note as Politico has that "leaders with divided interests cannot faithfully serve those who elected them."

Although we already see that the courts will be used to challenge the Administration (see chart), Trump is likely to wear lawsuits like battle ribbons. Besides, lawsuits do not release Congress from its constitutional duty to check abuses of presidential power.

The next congressional elections are less than two years away. Republicans have that amount of time to prove they are willing and able to keep the President from behaving unethically or illegally, up to and including "high crimes and misdemeanors". If members of Congress cannot do that job -- if they cannot begin putting good governance above bad politics - they should not be there. It's just that simple.

***
Less than two weeks after Trump moved into the White House, a survey by Public Opinion Research found that 40% of U.S. voters want him removed from office. Talk of impeachment is very premature. Before Republican leaders are likely consider impeachment proceedings, they would have to decide that Trump's behaviors will not change and will do serious damage to the nation, the presidency and the Party's prospects.

In the meantime, we already hear discussions about exactly what the Constitution means by "high crimes and misdemeanors". Jon Roland of the Constitution Society is one of many scholars who have studied that question. We might think that "high crimes" refers to the felonies and misdemeanors that apply to all of us, but Roland says the phrase refers instead to punishable offenses that only apply to high-level public officials who because of their status "are under special obligations that ordinary persons are not under".

Other scholars interpret the phrase to mean a president's abuse of his or her office and betrayal of the public trust. Federal standards on ethics, conflicts of interest and nepotism would seem to be among those "special obligations". Stewardship of the reputation and integrity of the presidency might qualify, too.

What seems certain is this: Unless there are radical changes in the behavior of this president and his people, we will see intensifying discussions about where Congress and the American people must draw the line.

Graphic: The above chart from Statista shows the number of lawsuits already filed against President Trump's administration compared to previous recent presidents. Most of the lawsuits so far are related to Trump's executive order restricting entry into the U.S. by citizens of several predominantly Muslim countries.