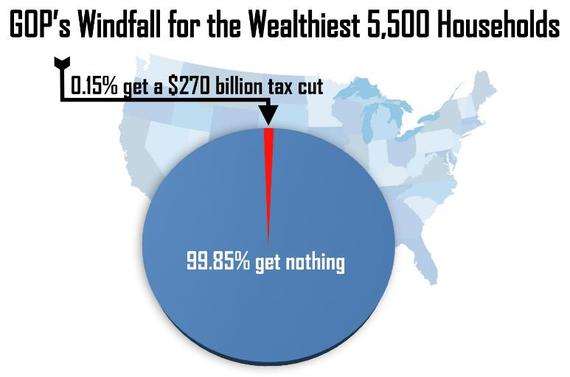 Last week House Republicans passed a bill to repeal the estate tax, giving a massive tax cut to the wealthiest 0.15 percent of Americans. In other words, 99.85 percent of Americans would see absolutely no benefit from this legislation -- only the huge spike in federal debt that would come along with it.

That's because repealing the estate tax isn't just a boon for the 5,500 wealthiest Americans; it is a bust to federal taxpayers, who would be on the hook for its quarter-of-a-trillion-dollars cost.

And it gets worse: Combined with other tax bills approved by House Republicans so far this year, our debt would grow by $584 billion to finance tax cuts for the wealthy.

That string of votes is even more galling considering how many pressing domestic priorities confront us -- from improving early childhood education to fixing our crumbling roads and bridges.

The estate-tax legislation approved by Republicans last week goes even further than previous efforts to repeal the estate tax, by allowing estates to avoid taxes on capital gains and other growth in assets entirely. It is estimated that, under this legislation, more than half of the assets passed down would have never been taxed.

This bill is even more egregious when considered against a backdrop of the dramatic rise in wealth and income inequality in the United States. The share of total wealth owned by the top 0.1 percent in the U.S. grew from 7 percent in 1978 to 22 percent in 2012.

It is no wonder that the vast majority of Americans -- Democrats and Republicans alike -- told a recent Pew survey that their greatest concern about the tax code is that some Americans don't pay their fair share. This legislation only fuels that perception.