Captain Thomas Orbison had a critical mission after World War I. Orbison was a doctor with the American Relief Administration. He was assigned to fight hunger in Latvia. 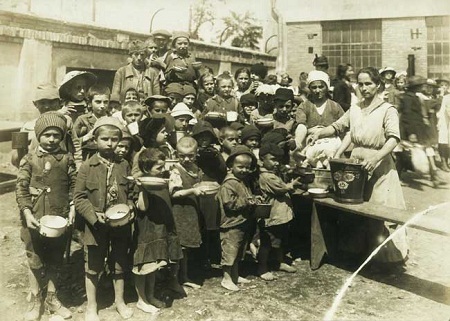 Orbison's task was to carry the "Gospel of Food for Undernourished Children." To which his commanding officer, Colonel John C. Groome, had one reply: "Go to it."

Latvia, which borders Russia in Northern Europe, was a disaster even after the peace treaty ending World War I. There were four armies in Latvia, including German troops. There was battle after battle. With war there is hunger.

Latvia had been deprived of basic foods for years. Little by little the population was being weakened by malnutrition. The children were paying the highest price.

Feeding a society is challenge enough, even in peacetime. Droughts or flooding can always interrupt the growing of food. There may be transportation, storage and distribution issues with food. In wartime everything is disrupted.

This is what Orbison had to contend with as he became in charge of child feeding in Latvia. So his mission began setting up kitchens to distribute the food. And what a sight it was. He writes in his memoirs Children, Inc.:

One cannot describe the wealth of love, joy and satisfaction that flowed from those rag-clad women and children as they sat at the tables and ate their first satisfying and nourishing meal in a long, long time. The tears that were shed, the smiles through the tears, the silent look of real adoration on every face -- one never forgets such an experience. Lieutenant Colonel Siter and Major Brookings accompanied me on that first day. We were all greatly affected by it and I believe it did us all a lot of good.

Not only did Orbison arrange the feeding but also he carried out medical examinations. Diseases had developed through the malnutrition and lack of access to basic services.

As Orbison carried the gospel throughout Latvia he encountered many difficult scenes. In Windau, he recalled the destruction of war. Orbison wrote, "The city is dead. The port is without shipping. What a commentary on the gospel of war."

His team set up feeding programs for the children there. At that time people had been through so much hardship they could not believe someone would actually do something good for them.

After setting up the program, Orbison moved on. However, he returned a year later. Everything had changed. He was greeted by two thousand children with flowers to thank him. A band was playing. The city had come back to life. Orbison wrote, "What a commentary on the gospel of service."

Orbison and his team are among those unsung heroes. But the gospel they were spreading is one that needs to be carried on today. What better timing than now? For as this summer approaches the terror of famine hangs over South Sudan, Central African Republic and Syria.

These are three countries suffering from war. If help does not come for them, starvation will claim the lives of thousands, maybe millions. The UN World Food Programme, the lead agency fighting hunger, is drastically short on resources.

Globally we are facing 842 million people who are hungry. There are many countries who are experiencing hunger because of poverty, natural disasters or conflict. Just recently in Darfur, Sudan hundreds of thousands of people have been displaced from their homes by violence. They need help to survive.

This gospel of service, feeding the hungry, is something we need now as much as ever. Defeating hunger is essential for world peace.