My insides are humming. The low-grade buzz of bewilderment mixed with nerves and how did we get here?

In my head, a gaping space. Hollowness. I don't remember.

So I freeze like a statue in the kitchen while the bread toasts. Memories present themselves for inspection.

Then, all at once, these details crowd my brain:

The slap of shoe against blacktop on his first day of kindergarten. A parade of classrooms and patient teachers. Folders checked. Reading logs signed. Lunches. Snacks. Harry Potter books. The Velveteen Rabbit Tea and a Gold Rush Musical. We the People. One mission project. Countless tears shed over a Jackie Robinson speech. I'll never be able to memorize it, he sobbed until he memorized it.

After school we'd walk together to the car, his little sister there too, happy to be next to him and one year behind.

He watched Nickelodeon and The Disney Channel when his homework was done. I tried not to worry too much about charting screen time. We played Apples to Apples and Who Knew and Memory and some firefighter rescue game (the name of which I can't remember) and CLUE and Monopoly.

In middle school, he began each morning ready to take on the day with his whole heart. Wear green for Spirit Day? YES! My boy was all in. Green socks. Green shirt. Green hat. Something green wrapped around his arms (I can't remember what). As he bounced down the street (full of spirit!), I worried he'd be embarrassed.

He was too thrilled to be embarrassed. At least not much.

The years passed without teen-movie stereotypes of extreme awkwardness, rebellion, or popularity. I won no trophies for Volunteer of the Year and he wasn't valedictorian or the MVP of any team. We were generally ordinary and that was okay.

It still is. Okay.

We ate dinner together when our schedules allowed, and I fixed him breakfast every morning of his life until he decided (recently) that eggs at six o'clock no longer appealed. He leaves for school at 6:30 and when he goes to lunch afterward with his friends then straight to his job delivering pizzas, I sometimes don't see him for 24 hours.

A hello in the morning, then nothing until the next morning.

Have a great day. Be safe. I love you.

He says I love you back every time. This means more to me than I have words for.

Soon he'll be in Oregon for college and I'll be here with his dad and his sister, one year behind him.

But on his last day of school, he ambles down the stairs and I ask him to take a picture with me (please!). He obliges as I knew he would. This quick kiss and a long hug. 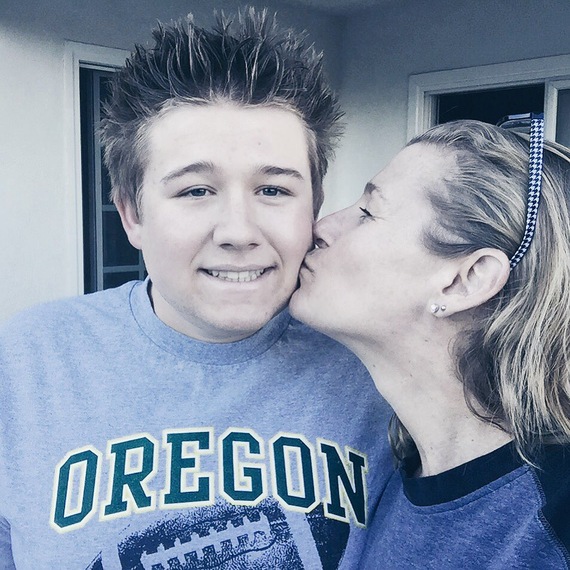 Have a great day. Be safe. I love you.

This was our one shot at it. That's all you get.

As a parent, you know this, but somehow while you're checking the clock, wishing the witching-hour away, you forget.

No. That's not right. I didn't forget. I just got through each day one at a time until I'd gotten through all the days.

A blur of joy and pain and smiles and frustration that fill the individual moments of a childhood. In hindsight, most hard stuff softens around the edges. What's left (for me) is this quiet certainty: we had a good run.

The minutes drag, but the years fly. Don't blink. Life is short. They grow up so quickly.

Despite these warnings (and they're everywhere, all the time) you can't feel the truth of it until you're looking backward, moving away from what was. People tell you having a child is a love like no other. You try to imagine, but it doesn't live in your bones until it's already happened to you.

But this time -- the stretch of years where he was my son under this roof, and I got to be his only mother -- we've reached the end.

And the beginning of something else.

We had a good run. 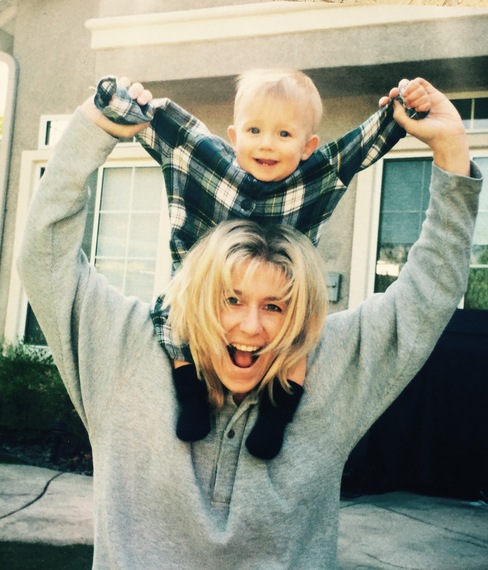 More:
MotherhoodParenting Parentsgraduationparents-moms
Newsletter Sign Up
Raise the kind of person you'd like to know
Subscribe to our parenting newsletter.
Successfully Subscribed!
Realness delivered to your inbox