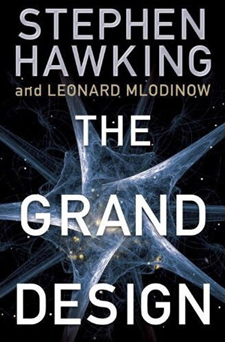 The Grand Design
By Stephen Hawking and Leonard Mlodinow
Bantam, 2010.
To appear in Free Inquiry.

Stephen Hawking is no doubt the most celebrated scientist in the world. Deservedly so, since he has for decades made outstanding contributions to physics and cosmology while suffering from amyotropic lateral sclerosis that leaves him almost completely paralyzed. In 1988 he published a popular book, A Brief History of Time, that was a blockbuster bestseller -- although wags questioned how many of the copies sold were actually read.

The same comment is likely to be made about his recent contribution, The Grand Design, written with Caltech physicist Leonard Mlodinow. Both books are extremely well written at the lowest possible technical level. But like so much that is written by scientists for a general audience, a certain minimum scientific literacy is necessary to get any inkling of what the authors are saying.

The result with Hawking's books, given their great exposure, is a media emphasis on what they say about non-scientific issues, in particular, religion. In Brief History, Hawking stirred the pot by referring to God in many places. In his final paragraph of that book he talks about someday discovering a complete theory that tells us why it is that we and the universe exist. His concluding sentence: "If we ever find the answer to that, it would be the ultimate triumph of human reason -- for then we would know the mind of God."

Of course this was interpreted as meaning that Hawking believed in God. But he was being misunderstood the way Einstein was frequently misunderstood when he mentioned "God" in his utterances. Both asserted their nonbelief in a personal God in no uncertain terms and were simply using the word "God" in the Spinozian sense as a name for the order if the universe. In fact, in the Introduction to Brief History, Carl Sagan explicitly summarized Hawking's main proposal: "A universe with no edge in space, no beginning or end in time, and nothing for a creator to do." This refers to a model for the origin of the universe called the no-boundary model Hawking published in 1983 along with James Hartle. The new book is not just a typical gee-whiz recitation of recent developments but a profound proposal for the nature of reality that turns on its head the conventional view of how physics operates. Philosophers of science will give it a lot more attention than scientists.

The authors have learned the lesson not to mention "God" too often, but the media nevertheless have jumped on their final conclusion: "Spontaneous creation is the reason there is something rather than nothing, why the universe exists, why we exist. It is not necessary to invoke God to light the blue touch paper and set the universe going." (180)

The Grand Design is an unfortunately misleading title, probably chosen by the publisher, as many titles are, with an eye toward selling the most books. People will read into this title the implication that there is still "something out there," some supernatural force that is behind everything. This is a common belief today among the many who are abandoning organized religion but are finding it difficult to accept the strict materialism implicit in atheism. But it is materialism all the way down. The book should have been called The Grand Accident, because that's what "spontaneous" refers to -- an uncaused accident.

Hawking and Mlodinow begin by informing us, "philosophy is dead," that it has not kept up with modern developments in science, particularly physics, and that scientists "have become the bearers of the torch of discovery in our quest for knowledge." (180)

For centuries, the message of science has been that all knowledge of the world is obtained through direct observation. The revolutionary theory of quantum mechanics developed in the last century clashed with everyday experience but has proved enormously successful, passing with flying colors the many stringent laboratory tests to which it has been subjected for almost a hundred years. However, no agreement has ever been reached on what the quantum models inform us about the true nature of reality. This is by contrast to classical Newtonian physics, where no one doubts that an apple and the moon are real. Hawking and Mlodinow conclude: "There is no picture of theory-independent concept of reality." (42) They call this view model-dependent reality.

This is not as world-shaking as it seems if you give philosophers some credit. Most physicists still hold a naïve realistic view of their theories in which not only apples and the moon are real, but so are electromagnetic fields and quantum wave functions. But, despite the disdain of Hawking and Mlodinow, philosophers have been telling physicists (to deaf ears) for years that all observations are "theory laden." Indeed, centuries ago Immanuel Kant pointed out that every human concept is based on observations that are operated on by the mind so that we have no access to a mind-independent reality. All we do in physics is make observations and formulate mathematical models based in these observations that can be used to predict future observations. These models are not arbitrary -- they have to fit the data -- but we have no reason to believe that their ingredients such as space, time, mass, and energy exist in one-to-one correspondence with the elements of reality. Hawking and Mlodinow say, "It is pointless to ask whether a model is real, only whether it agrees with observations."

The authors express their preference, as do many contemporary physicists, for the quantum model proposed by physicist Richard Feynman (while still a graduate student at Princeton in the 1940s) that they refer to as "alternative histories." Actually, a better term is "sum over histories." In this model one does not follow the traditional procedure of calculating the path of a particle, or system of particles, by applying some equation of motion. Rather one assumes all possible paths exist and by summing over all those paths the probability for the particle or system ending in a specific state can be computed.

For example, if you illuminate a surface that contains two narrow slits, each photon from the source takes both paths available to it and goes simultaneously through both slits. The Feynman model enables you to calculate the observed interference pattern. If you place a detector along one of the paths, you then know which path was followed by the photon and the model correctly predicts that the interference pattern will go away.

Hawking and Mlodinow apply Feynman's ideas to M-theory, a generalized extension of string theory. Although neither theory has come close to being testable in the laboratory, not only in the present but perhaps in the foreseeable future, they argue that it is the only candidate for an ultimate "theory of everything" that meets all the requirements for such a theory.

M-theory has eleven dimensions, ten of space and one of time. Since we only need three dimensions of space along with the one of time to describe observations, seven space dimensions are curled up at tiny distances far smaller than our most powerful instruments can probe. The shape of these inner dimensions carry all the information needed to build the universe. The problem is, M-theory provides no unique shape but allows for 10^100 possible shapes (some say 10^500, but what's a factor of 10^400 between friends?).

This means that there are 10^100 (or 10^500) possible universes. Applying Feynman's ideas, Hawking and Mlodinow argue that these universes constitute alternative histories that all exist and a sum over them should be taken to get the probability for the universe that we observe. As they put it, "The universe appeared spontaneously, starting off in every possible way." (136)

So it is no longer assumed that there is an initial state, presumably "nothing," from which a predetermined path is followed to the present. Rather, the universe is taken as it is at the present time and, somewhat like a detective reconstructing a course of events at a crime scene, the most probable path back to the origin is calculated. Note that the histories that contribute to the Feynman sum depend on our current observations. Thus they do not have an independent existence but depend on what we measure. The authors say, "We create history by our observations, rather than history creating us." (140)

This unfortunate wording comes dangerously close to the claims of quantum spiritualists such as Deepak Chopra that quantum mechanics tells us that we make our own reality. But this is not quite my interpretation of the proposal made in this book, which is far more plausible. Human consciousness is not deciding what reality is. Reality is all the possible histories and these can't be changed by thinking about them. All these histories contributed to our present state and our observations pin down that state enabling us to compute the probability for each history reaching our present state.

So 10^100 universes converged on the one that has the necessary structure to produce life as we know it. Most of the universes probably did not support any kind of life, although a few would be expected to allow for some kind of life different from ours. Thus, the theological claim that our universe was exquisitely fine-tuned for us by a creator is refuted. Hawking and Mlodinow make it clear that the idea of multiple universes, the "multiverse," was not invented to account for apparent fine-tuning, as often charged by apologists, but is "a consequence of the no-boundary condition as well as many other theories of modern cosmology." (164) And once you have one accidental universe, you will have many.

Some reviewers have criticized The Grand Design for basing its case on the highly speculative M-theory. Actually, even without M-theory the alternate histories of Feynman together with cosmological models such as the no-boundary model are sufficient to provide a purely natural, non-causal explanation for the existence of our universe and our place in it. M-theory or no M-theory, the pieces of our universe fell into the places where they are, not because of a guiding hand and a grand design, but through mere accident. This important book deserves its position on the bestseller list.