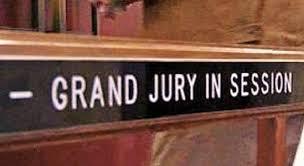 A prosecutor might be able to get a grand jury to indict a ham sandwich, as the saying goes, but not two police officers who caused the deaths of unarmed men. Recently, two grand juries decided the fate of police officers involved in the deaths of Michael Brown in Ferguson, Missouri, and Eric Garner in Staten Island, New York. The grand juries failed to find reasonable cause to believe that a crime had been committed by either officer, even though the deaths of Mr. Brown and Mr. Garner were indisputably caused by the officers' actions, and both men were unarmed when killed. The reaction to these decisions has been volatile. Protests, marches and even riots have ensued, clearly showing a frustration on the part of citizens -- mostly in the black community -- that black men are regularly being unfairly profiled and mistreated by police officers. While the impetus behind these highly charged reactions and racial arguments warrant real debate and focus, an equally glaring issue in the Brown and Garner cases is the way in which the district attorneys presented the cases to their respective grand juries.

First, a bit of background on the grand jury process. In New York, every felony charge against an individual must first proceed through the grand jury process. If the grand jurors find that there is reasonable cause to believe that a crime was committed, and that the defendant committed the crime, an indictment is voted. Although in New York, a defendant has the right to testify before the grand jury, the process is by no means a two-sided affair. A staggeringly high percentage of cases a DA presents to a grand jury lead to a voted indictment. According to statistics provided by the Division of Criminal Justice Services, in New York, statewide, DAs have obtained an indictment through the grand jury about 97 percent of the time a case is presented. The reason for this is simple: In all cases, the DA presents only the evidence needed to obtain an indictment -- often presenting just enough for the DA to overcome the burden of proof. By the same token, the reason for the high rate of indictment is not that all the evidence is consistent or that no witnesses have credibility problems. To the contrary, in every case, inconsistencies and credibility issues arise -- all witnesses are human. DAs have remarkable power to present only the evidence that they desire the grand jury to hear; this is why cases almost always proceed to the next stage on the road to trial. Keep in mind that a grand jury's role is not to determine guilt or innocence but whether there is enough evidence to move the case forward. The standard is not very high. Hence the "ham sandwich" adage.

I have been involved in hundreds of cases that have been presented to the grand jury, and I can count on one hand how many have received a "no true bill." And if you filter out cases in which a death occurred, a "no true bill" is rarer still, if it exists at all. This is because the DA routinely presents the nutshell of a case and gives the grand jury only enough to establish a potential crime. Never does the DA try his case inside the grand jury by putting on all his potential witnesses -- or, more to the point, the defendant's potential witnesses. So, although there is almost always conflicting evidence and credibility problems, the grand jury never hears about them.

Take a look at what Supreme Court Justice Antonin Scalia says about the grand jury's function in the case of United States v. Williams, where he wrote, "It is the grand jury's function not to enquire ... upon what foundation [the charge may be] denied or otherwise try the suspects' defenses, but only to examine upon what foundation [the charge] is made by the prosecutor." Indeed, that is the normal process.

And this brings us to the Brown and Garner decisions. Regarding the Garner matter and the videotape that documents the chain of events, it is hard to understand how the DA, given his power over the grand jury, could not have obtained an indictment if that was what he set out to do. With respect to the Brown decision, to get a sense of the atypical way the grand jury process worked, one need not look any further than the words spoken by Ferguson DA Bob McCulloch on the night he announced the grand jury's decision. He talked of "speculation," accounts filled with "little if any solid, accurate information," and "lack of accurate detail." If you closed your eyes, you would have thought he was a criminal defense attorney giving a press conference on the courthouse steps. In a typical situation, if a DA was announcing a "no true bill" by the grand jury, the undertones would undoubtedly be that the grand jury got it wrong. One is therefore left with the disheartening impression that, from the outset, police officers are receiving favorable treatment when DAs present a case to the grand jury -- certainly treatment that is not typically afforded to defendants who are not police officers.

Case in point: If you replace the officers in the Brown and Garner cases with non-officers, it is hard to fathom a situation in which the grand jury would not vote to move the case to the next stage in the criminal process. Remember, the grand jury does not determine a defendant's innocence or guilt. So if a defendant claims self-defense, as Officer Wilson did, or the lack of intention to hurt someone, as Officer Pantaleo claims, the case would undoubtedly move forward and be dealt with either through discussions with the DA, plea bargaining or a jury trial. That is how the process usually works. It did not work that way in Ferguson or Staten Island.

They Were Convicted Of Murder. Now The Men Who Killed Ahmaud Arbery Face Hate Crime Charges.