Over a holiday weekend, it's always our hope to have the company of our preschool grandchildren. And after they leave, it's our hope to someday get all of our electronics working again.

There's something about tiny persons and LCD panels that's just irresistible. In our home, alas, the electronics all seem to be located at perfect toddler eye level. I always tape covers over the CD player, amplifier, and DVD player, of course, but for the tots this just acts as a flashing neon beacon that there's something really neat underneath. Pretty much every CD we listened to for weeks after they left was really heavy on the bass. The lights on the DVD player still blink continuously.

As for the remotes, even my engineer husband Olof is sometimes hard put to get them to operate a TV again should the remotes be left unattended. (So many buttons! So little time!) The living room light timer is perpetually 10 hours off when the tots are in residence casting us into darkness at inopportune times and lighting up the house like a Christmas tree at 3 a.m.

Tragically for us, the electronic touch screen panel on our KitchenAid range is on the front rather than the top. Exquisitely accessible to someone of the pre-school persuasion is the Options button which when combined with any single digit between one and seven suddenly makes something that worked before cease to. For example, Option + 2 turns off the timer bell so one could, for example, discover that they've had the back yard bubbler sprinklers running for seven hours. Option + 4, which turns off the Cooking Completion Time bell, is a serious bummer as well.

Fortunately, you can put the oven control panel in Child Lock mode so they can't use it. But you can't either. More problematic was the fact that two Thanksgivings in a row, a grandchild took it upon herself to turn off the oven while the turkey was cooking. You walk into the kitchen and instead of the comforting hum of the oven, there's an eerie silence and the heart-stopping Black Screen of Death on the touch screen panel. Has the oven taken this extremely inopportune time to crump? Or was it a stealth toddler operation? I press the On button and the panel (and oven) blessedly spring to life. But how long had it been off? Ten minutes? Ack, an hour?

Deciding the dishwasher was suddenly on the fritz, I discovered that tiny fingers had simply re-set it to "Rinse and hold."

The really odd thing is that we never actually see them do it. And it's not like they're roaming around our small house unsupervised. But toddlers seem to have radar for Unattended Electronics upon which they engage in covert attacks. The Navy Seals could take lessons.

Realizing three days after the Toddler Invasion had decamped that we had no phone service, we discovered with AT&T's help that we don't have three land line phones but four: the last one is the small handset on our little-used fax machine that was ever so slightly off the hook.

My computer is in the guest room and should I inadvertently leave it up after I've checked email, I find that all my desktop icons have been rearranged, my font settings mysteriously microscopic (must ask them how they do this since I can't change my desktop fonts if I try), and the speakers cranked up to 150 decibels. I can only wonder what they've ordered on Amazon.

My desk and desk chair, meanwhile, have been elaborately reupholstered with an entire package of Post-It Notes, some with personal "wuv" messages (the author informs me) in the form of Hi-Liter scribbles. All electronic transgressions are immediately forgiven. But I won't be entirely disappointed when their interests evolve from our electronics into something that doesn't leave us in semi-darkness and total radio silence for at least a week after they leave. 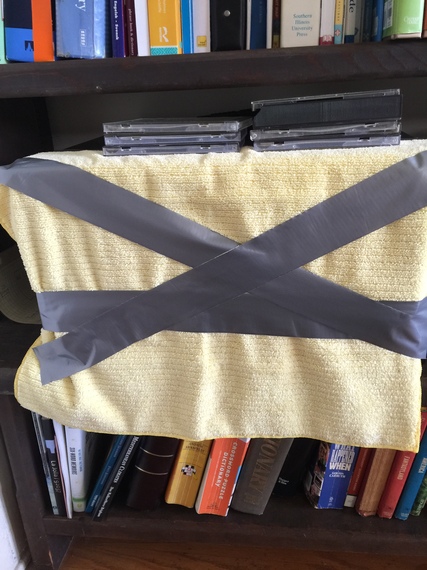