It was her husband David's terminal illness and passing away at the young age of 60 that started Sandy Caley thinking that she needed to be kind to herself and live life to the fullest. Now a "semi-retired" widow who lives alone in Nottinghamshire, England, after raising three sons, she was ready to chase her deepest, most passionate dreams.

"I just decided that if I wanted to do something, and it wasn't harming anyone else, and I could afford it, then I'd do whatever that was," Sandy said.

Throughout her adulthood, her passion for The Monkees, the group she obsessed about for years starting at age 13, lay dormant. There were other obligations and priorities, and her husband didn't understand her interest in them.

So at the ripe young age of 63, and now a grandmother, Sandy decided that she would follow the band The Monkees around the US during their 50 year anniversary tour and make up for all those years of missed opportunities to see them. Her social media posts simply stated, "Granny's on tour again."

This raised some eyebrows with her sons, who were worried about her traveling abroad alone. So far, she's been to two concerts in the US, and she has tickets for a return trip for three more shows.

"When I heard about the 50th anniversary tour, I felt like I waited 50 years for my opportunity," Sandy said. "I was a bit nervous, but knew there would be Monkee fans at each venue, and they are like being embraced by a huge family."

Her fanaticism started when the Monkees debuted in England on television in January 1967. She fell hopelessly in love with Davy Jones, and every penny she earned went to buying Monkee albums which she "wore out" by playing them so much. Her school "satchel" was covered with the Monkees and "I love Davy" signs and she collected magazines and information on her favorite band.

When she was 14, she heard the Monkees were appearing in London, but living in Northhampton which was 80 miles away, and no way to get there, she was unable to go to the concert. She grieved and cried for four days. Even today, she explains that how vivid and raw her feelings still are over having the band in her country but not being able to see them as a youth. It was a missed opportunity of a lifetime.

A more painful life event was the day her husband David was diagnosed with a terminal illness. She remembers that on the very same day, February 29, 2012, she turned on the television set and found out that Davy Jones passed away.

Sandy's husband passed away just a few months later and she started going through things. She came upon her old Monkees albums, and decided not to keep them because she didn't have a turntable to play them. That started her quest to replace them with a full catalog of their music, and she then discovered a whole Monkees fandom on the Internet.

"For me discovering the Monkees fans on the Internet was like speaking a very rare language your whole life that no one else spoke, and suddenly you find a whole village speaking your language," Sandy said.

Fast forward to present day when Sandy went to see Micky Dolenz and Peter Tork appearing as the Monkees at the Hammersmith Apollo in London last September, and "it was like a switch was thrown." She described the utter joy and happiness she felt at the event and just loved every minute. She knew she would have to go to see them again no matter how far away.

She came to the US already once this past summer for a few fan happenings and conventions, and then bought tickets for three Monkees concerts for this coming October.

Once Mike Nesmith announced he would play his very last concert as a Monkee on September 16 in Los Angeles Sandy decided she had to be there, even though her other three East Coast concerts were only a month away. She flew solo the 5500 miles to Los Angeles from England by herself, traveled to San Francisco, and then returned home preparing to fly out again for the next leg of the tour in a month's time.

"I came, I saw, and I cried," Sandy said. "They have given me 50 years of joy. I am so happy for the support I received from friends and family to follow my dream."

After the Los Angeles concert, Sandy traveled to San Francisco for another show. While there, Jodi Ritzen, one of Micky Dolenz' team, found out about the "Granny Groupie," who was following the group around to several concerts. When Micky Dolenz was informed about this special fan who traveled so many miles on her own to see them, he wanted to meet her. It was then that another dream came true, one that was totally unexpected - Sandy was whisked backstage after that show and met Dolenz close up and in person.

"Those were the most extraordinary and exhilarating hours of my life," Sandy said of the concert and then getting to go backstage to meet a Monkee. 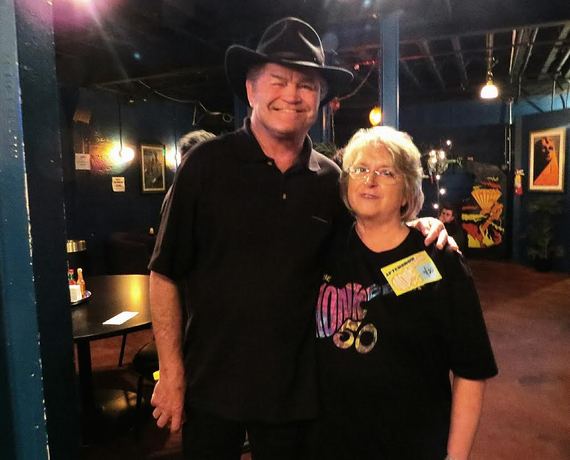 You can see the delight in Sandy's face in the photo below, just moments after she had spent some time with Dolenz. 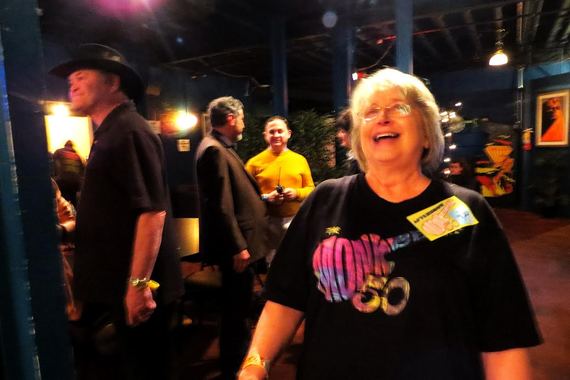 There were other super fans at this leg of the tour who traveled an incredible number of miles to see their favorite group- most of them 50 year and 40 year fans. A group of four women from Japan traveled 5500 miles and saw four concerts, and an Australian who is seeing every concert in the US, and even a woman from Egypt, who was kind enough to snap the above photos of Sandy and Micky Dolenz.

Yet even among this group of diehard fans, everyone was most impressed with the spunky granny who traveled across the globe alone and on her own, and made her dreams come true.

Read my regular blog at www.arlenelassin.com