The massive phenomenon that was the Grateful Dead has never been objectively reported on, an historical anomaly that boils down to what might as well be a Buddhist koan: Pretty much anyone who was there must be immediately eliminated as a reliable witness.

First, there were the drugs, and if nothing else, Dead drummer Bill Kreutzmann's memoir, Deal: My Three Decades of Drumming, Dreams, and Drugs with the Grateful Dead, is full of them. Sure there is plenty of LSD -- clearly the key to understanding the Dead, in fact without it, they'd probably never have graduated from their local bar (never mind acing, and then becoming proctors, of Ken Kesey's Acid Tests) -- and marijuana, which is like mother's milk to this set. 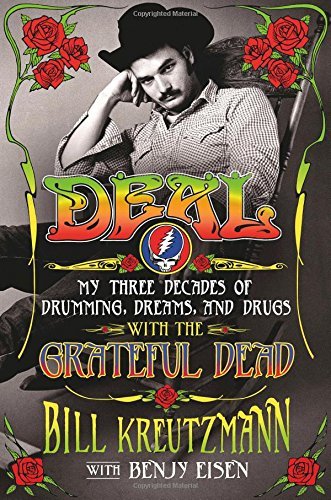 There is also far too much heroin, though it could be argued that any amount is too much, especially when your guitar player is nodding off in front of stadiums full of paying fans. But the real knock out, at least for the author, comes in the slightly more prosaic combination of coke and booze, which led him in and out of rehab more times than I could keep track of (ditto his marriages - which apparently he couldn't keep track of either, at one point basically giving up altogether: "I don't remember when Shelley and I got married, exactly. I'm thinking it was sometime before Egypt. So 1978. But maybe 1977..."), and then finally a heavy reliance on Xanax, which leads straight back to rehab, followed by some of the worst concerts of their dazzlingly inconsistent career, only to find him in the next chapter swilling more booze, smoking more dope, philandering without remorse, remarrying, band members dying, and all of this with almost zero trace elements of the self-awareness that one hopes to find in a rock'n'roll memoir.

Which maybe isn't such a grand surprise, given that what made this band one of the biggest in history was a singular lack of same by their adoring fans, the Dead Heads who constitute the least critical, most accepting mass audiences in the history of entertainment. If unconditional love is a virtue, then surely they are all going to heaven.

The Sex Pistols notwithstanding, never has a band had such contempt for their fans.

What other band could get by putting on so many admittedly bad shows? Kreutzmann tends to soft-pedal it, but every once in a while the truth eeks out.

Eighty-thousand people come out to see a band, that Ornette Coleman notes after sitting in with them, doesn't even "listen to each other when they play," and it's just another day at the office.

Eventually their biggest fan, Dead Head-turned-Dead keyboardist Bruce Hornsby, ups and quits for the same reason. It's all just part of the trip. At least unlike the other keyboardists who took the gig, he got out alive. "The Grateful Dead had a way of going through keyboardists... their residency in the band had a tendency to terminate in early death," Kreutzmann quips, matter-of-factly. Later he adds, "there are a lot of deaths in this story, darn it."

Kreutzmann's lack of sentimentality is one thing, the lack of introspection another.

Certainly as rock bands go, the Dead has a mystique about them that could rival the Stones or Zeppelin or the Doors. The Dead somehow found a sweet spot in the LSD experience -- they never had the swagger or sweat or sex appeal of Jagger and Richards or Morrison or the cats in Led Zeppelin to ever become a convincing rock'n'roll band (it may not have helped that they were one of the few groups to ever dress worse than their fans) -- but no group has ever been better at playing sloooow. No one could project as much cosmic vulnerability and spiritual gravitas as Jerry Garcia -- he was a vastly underrated singer who could inhabit a song with as much emotional grit and authenticity as Bob Dylan -- and on a good night he set a pulse with his guitar that vibrated in perfect harmony with an audience calibrated with Owsley's finest. Sadly, you never knew what you were going to get. At one point Kreutzmann spells it out: "I want to make it clear that we were not a cult... Jerry Garcia was not the messiah. We weren't gods."

In Deal, the mystique quickly crumbles into the mundane.

Kreutzmann has plenty of opportunities to linger and try to decipher what it all means, and certainly the story is ripe with great personalities and the ripples of the American counterculture exploded across thirty-years -- the Dead may not have been gods, but they were the de facto leaders of a genuine subculture -- but it all starts to read like a tick-tock of Kreutzmann's life. I am only so interested in his love for scuba diving, or his new house on Hawaii. After reading this book, whatever magic that was left of the band for me is pretty much gone. We've heard it all before, and better, notably in bassist Phil Lesh's book Searching for the Sound: My Life with the Grateful Dead, and Dennis McNally's A Long Strange Trip: The Inside History of the Grateful Dead, not to mention Tom Wolfe's essential primer on Kesey and the acid tests.

I should mention that I have been to a dozen or so Dead shows (some of them quite good, some which never seemed to get off the ground, at least one which was perfectly dismal, and one which was the soundtrack to the finest acid trip I have ever experienced), which is an awful lot if you are on the side of the fence where most of my punk rock friends live (appalled by the lassitude of a band so thwacked out of their heads and so unprofessional by normal standards that they consider repeatedly turning in musically grueling, completely under-baked marathon shows part of the experience), but nothing if you are a real Dead Head who measures one's bona fides by how many shows you have seen. If ever there was a business built on repeat customers, it's the Grateful Dead.

And yet there is hardly any true appreciation of the Dead fans in this book, certainly no attempt to get into the group-mind and tribe mentality that made a Grateful Dead concert unlike any other rock concert, except to acknowledge that at one point in the '80s the folks in the front row were looking as wasted as the guitar player, whose heroin addiction had begun to dominate their stage presence.

But worse than that is the palpable disrespect the band shows for the very people who have kept them on the road lo these many years -- "If the operation fails and the wheel doesn't turn, then you have just disappointed 25,000 fans -- or more -- in one evening.... Some of whom quit or willingly got fired from their shit jobs just to be able to go to the show... Some of my band members thought this was ok."

And that's why the most tragic part of Kreutzmann's book may be the acknowledgements, where there is no mention of the Dead Heads, no thank you to the family who has truly made this the longest, most inexplicable trip ever, and presumably precisely the ones for whom this book was written. Kreutzmann takes lots of time to explain why marijuana should be legalized, but for a musician, this kind of oversight should be a crime.

A slightly different version of this review previously appeared on
The New York Journal of Books.