Few roads have conjured up romantic images like the Santa Fe Trail. It lasted only 60 years. But from 1821 to 1880, it was America's first international highway. And certainly the most colorful. 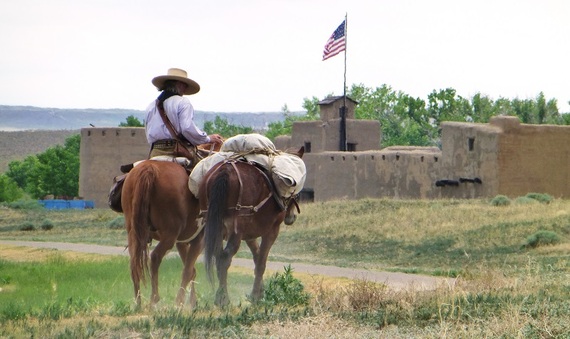 Across 900 miles of open prairie, from Missouri to Old Mexico, the Santa Fe Trail was one of the most important commerce roads in the world, bringing goods from Europe -- wool, silk, iron tools and cotton cloth -- to Mexico and returning with furs, silver, mules and horses. Traveling on the trail were a wild assortment of characters -- fur trappers and mountain men dressed in buckskins, famous guides like Kit Carson, big-hatted vaqueros and cowboys, soldiers from three different armies, gold seekers, journalists and adventurers. 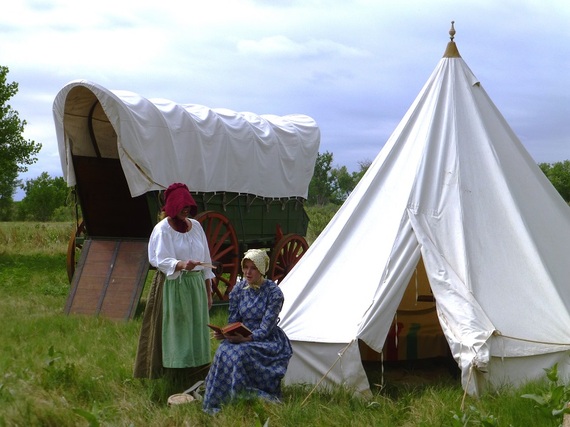 Thousands of huge 6,000-pound Conestoga wagons creaked across the dirt tracks, pulled by teams of 20 oxen, that were matched by color so that one wagon had all black oxen, while another used all brown. These wagon trains with their white canvas covers billowing in the wind like sails, slowly moved across a sea of grass at a rate of 15 miles a day.

And then there were the Indians. The trail passed through the traditional hunting grounds of the Sioux, Cheyenne, Arapahoe, Comanche and Apaches. There were raging rivers to cross, massive herds of buffalo to be negotiated, mountains to be conquered, drought, cold, snow and thunderstorms.

And then, just like that, the Santa Fe Trail was gone. In 1878, there were 500 dusty wagons rolling into Santa Fe from the trail every day. But two years later, the railroad from Missouri was completed. Where once it had taken three months to travel to Santa Fe by foot, by rail it took just three days. The famous trail quickly faded into obscurity, wind and rain washing away all but a few traces.

Today, modern highways follow some of the original route and most people zoom by at 75 mph. But slow down, and it's possible to still see some of the old trail. There are natural landmarks and even some ruts in the prairie, carved there by wagons nearly 200 years ago. 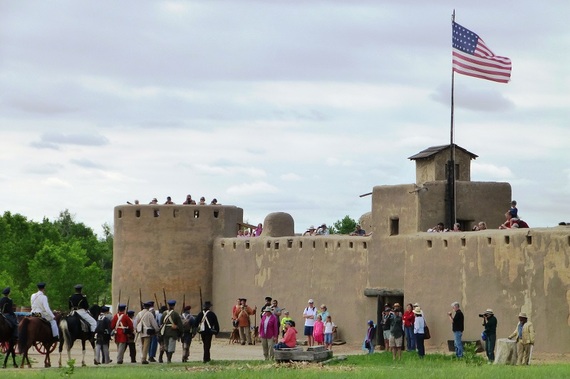 Best of all, the National Park Service rebuilt the most famous site on the trail -- the amazing adobe castle, Bent's Old Fort in La Junta, Colorado.

Enter the gates of this mud-colored trading post, past massive towers guarded by cannons, and you are time-tripping back to the 1830s. Here, you can listen to tales from mountain men and soldier re-enactors, touch the wagons they pulled across the prairie and see the exact same views they did when this adobe fort marked the border between Mexico and the United States.

The story of the Santa Fe Trail began a decade before Plymouth Rock, in 1610 when Spanish explorer and colonist Pedro de Peralta laid out the Villa de Santa Fe -- the City of Holy Faith -- in Northern Mexico. It was an ambitious plan with a grand Governor's Palace on the plaza. But of course, at first, there were bloody battles with Indians, who in 1680 revolted, threw the Spanish out of the territory and occupied the Palace for 12 years. But slowly over time, Santa Fe became a peaceful and prosperous city, except that it was completely isolated. The Spanish government forbid any trade with the North Americanos of the United States and anyone who tried was arrested.

Then in 1821, William Becknell changed that. He was a bankrupt Missouri trader, one step ahead of the U.S. law, who decided to take a big risk. He smuggled the first three wagons of goods to ever cross the Great Plains, somehow dragging them over rivers and up mountains and finally into the plaza of Santa Fe. Where instead of being arrested, he was treated as a hero! There had been a revolution, the Spanish were thrown out and the new Mexican government welcomed trade.

Overnight, the word was out and great caravans of wagons began assembling for the tremendous profit to be made trading with Mexico. The typical wagon train didn't follow one wagon after another, as shown in films. No one liked eating the dust of the wagon ahead, and there was plenty of land, so the wagons spread out in columns. Caravans of 10 to 100 wagons traveled together for protection. Trade mushroomed from $65,000 in 1825 to $1 million twenty years later. 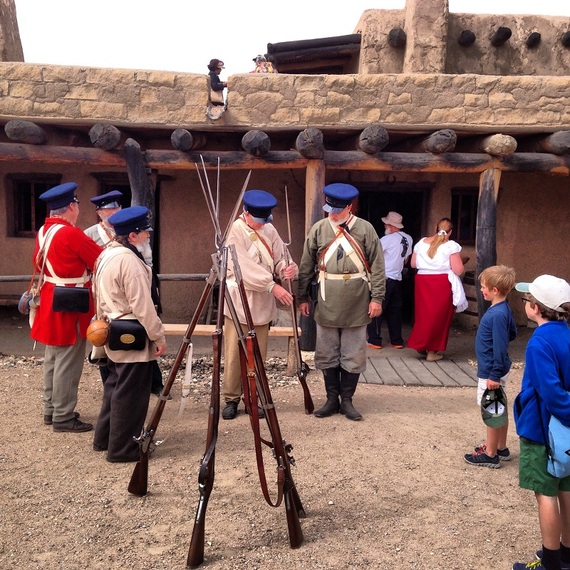 When the United States declared war on Mexico in 1846, an army of 1,657 soldiers and 150 wagons tramped over the trail, to capture Santa Fe without firing a shot. In the Civil War, both Confederates and Yankee armies used the trail, fighting the deciding battle of the war in the West directly on the trail at the Battle of Glorieta Pass. The Union victory preserved New Mexico and Colorado for the North.

One of the trail's most exciting events occurred n 1835, when brothers William and Charles Bent and their partner Ceran St. Vrain decided to build an Indian trading post along the Santa Fe Trail, on the banks of the Arkansas River. This was the dividing line between Mexico and the United States at the time and the center of Indian hunting grounds. Profits could be huge. The Bent's could buy a buffalo robe from the Indians for 25 cents worth of trinkets, and sell it in Missouri for $6.

But the Bents didn't want to build just any old trading post or fort. They envisioned a fortified town -- a castle, really -- that would be built of adobe bricks, guarded by towers and cannons. It would be a place that could provide all the luxuries of the city to hungry travelers who at this point had been weeks on the trail.

The Bents brought 100 workers from Mexico, pushed mud and straw into wood forms to create sun-dried bricks, and over two years, built their dream. A visitor in 1839 marveled, "it was as though an air built castle had dropped to the earth in the midst of a vast desert."

The original fort vanished, along with the trail, long ago. But the National Park Service working with original plans, drawings and archeological excavations, built an exact replica. 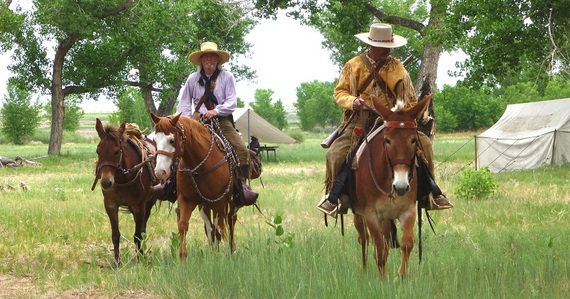 The first view takes your breath away. The fort's parking lots are several hundred yards away. As you leave the parking lot and climb a small rise, there suddenly is Bent's Fort in all its glory, sitting on the plains just as it would have appeared to wagon trains.

Enter the gates and you are in 1830s, surrounded by bustling re-enactors portraying the blacksmiths, gunsmiths, hunters, traders, soldiers and horse wranglers who kept the fort in business. It was a busy and multi-cultural place filled with many languages. The Bent's owned three slaves who lived here, of whom Charlotte was a renowned cook. Indians frequently camped outside the fort while trading, and today, teepees still dot the horizon.

The center of the fort was an open plaza, surrounded by two story buildings. On the bottom floor were the storehouses, trading rooms, a barber shop, dining rooms, a kitchen and a blacksmith shop. The upper floors had more private rooms and even a billiard table and bar. Some 60 to 100 people lived in the fort, and it could accommodate up to 15 prairie schooners in a walled adobe corral. No one worried about Indians stealing goods from the corral -- the walls were protected on top by living cactus.

Kit Carson worked at the fort as a hunter, supplying meat for the workers, before becoming more famous as a trail guide and soldier.

Ironically, William Bent didn't live in the fort. His wife, a Cheyenne named Owl Woman, didn't like all the constant noise of wagons coming and going, and the hammering in the blacksmith shop, and the traders and trappers drinking whiskey and carousing. So she lived in a teepee by the river. She made William live there too.

When war broke out with Mexico, Bent's Fort became an army post. After the war, trade fell off, and the Bents had difficulties with the U.S. government. One story is that they set fire to the fort rather than have the U.S. take control. At any rate, the fort was abandoned and the adobe bricks eventually washed away, like the trail it had served, leaving only the wind, the grass and the big skies of the Great Plains. 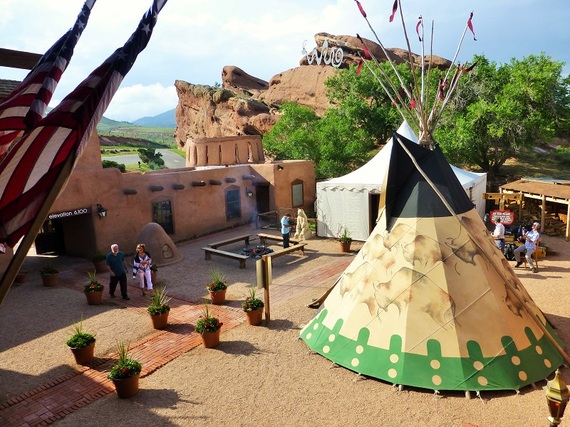 Bent's Old Fort is located in La Junta, Colorado, 190 miles from Denver and 280 miles from Santa Fe. The first reproduction of the fort was created by Sam Arnold in 1963 in Denver as The Fort restaurant. Today, the restaurant is run by his daughter Holly Arnold Kinney and The Fort still dishes up more buffalo than any other restaurant on the planet. It's a wonderful place to soak up the atmosphere of the Santa Fe Trail, while tasting buffalo, elk, quail, rabbit -- even rattlesnake is on the menu. Try the "Bowl of the wife of Kit Carson -- a soup served by Kit Carson's granddaughter with chicken, rice, chipotle chili, dried garbanzo beans and cheese, served with avocado, cilantro and lime. Wash it down with a Prickly Pear Margarita made with real cactus juice. As the mountain men used to say, "Waaaah!"