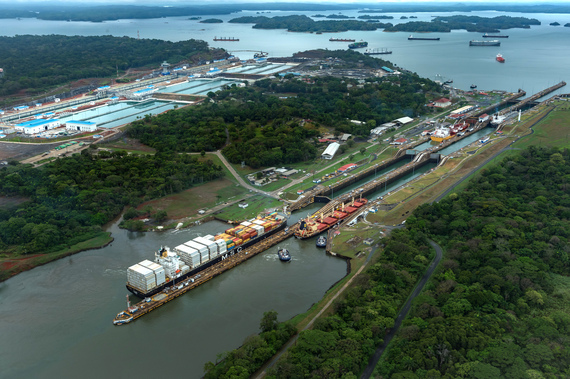 This has been an extraordinary year for the Panama Canal. We reported record annual tonnage at the close of fiscal year 2015, we completed the Panama Canal's first ever Expansion Program to create a new lane of traffic at the waterway, we inaugurated the new Canal with more than 40,000 people, both local and from around the world in attendance, we surpassed the Expanded Canal's 100th transit in less than two months, and today, August 15, we celebrate the Canal's 102nd anniversary.

Since the 16th century, many tried unsuccessfully to carve an inter-oceanic waterway through Panama. But our story didn't begin until this very day in 1914, when the SS Ancon first passed through the Canal, forever altering world trade. Later, after 92 years of operation, the Canal would again transform global shipping and trade routes when it was decided to create a new, Expanded lane.

Over the past century, the Panama Canal has left a legacy of innovation, connectivity and sustainability, having a direct impact on world maritime trade, as well as the people of Panama. It's this 102 years of experience and know-how that allowed the Canal to successfully complete, and now operate, one of the greatest feats of engineering known to man, bringing the Panama Canal into the 21st century.

There are many state-of-the-art features that set the Expanded Canal apart from the original waterway and others around the world. From the educational programs and captain and pilot training offered at its Center of Simulation, Research and Maritime Development to the massive water-savings basins that reutilize 60 percent of the water used per transit and use 7 percent less water than the original locks helping the Canal conserve water and maintain the viability of the route, the Expanded Canal has invested in its people, in its operations and in its sustainability for the years to come.

And the results are showing.

In the 50 days since inaugurating the Canal Expansion, we've received 289 reservations and transited 104 Neopanamax vessels, and these numbers continue to grow daily. Major liners such as the CKYHE Alliance, the G6 Alliance, and the 2M Alliance have rerouted services to the Panama Canal to take advantage of the significant time savings the waterway provides. And when comparing July 2015 to the same time this year, the Canal recorded a 12 percent increase in tonnage, 7 percent increase in transits and 6 percent increase in overall revenue.

The LNG and container segments stand to experience some of the most exciting benefits of all. According to IHS Maritime and Trade, the opening of the Expanded Canal unlocked the waterway to 45 percent of the international container ship fleet. Adding to the container ships that currently transit the Canal, the Expansion enables access for 97 percent of container vessels worldwide.

In addition, nearly 90 percent of the global LNG fleet can now access the Panama Canal and the substantial time and cost advantages that it provides, opening a major LNG trade route between the U.S. Gulf and East Coast and Asia and redrawing the global trade of this commodity. As of now, four LNG vessels have transited the Expanded Canal and another four are expected to transit by August 26, which marks the new waterway's second full month of operation.

In FY 2017 alone, we expect to welcome upwards of 399 million PC/UMS with an increase in five years to roughly 524 million PC/UMS. But more so than results, I am most proud to begin the new legacy that the Expanded Canal will share alongside the existing lane. This time last year, I wrote about my excitement for the Panama Canal of the 21st century. Well, the future has now arrived, and it is certainly very promising.