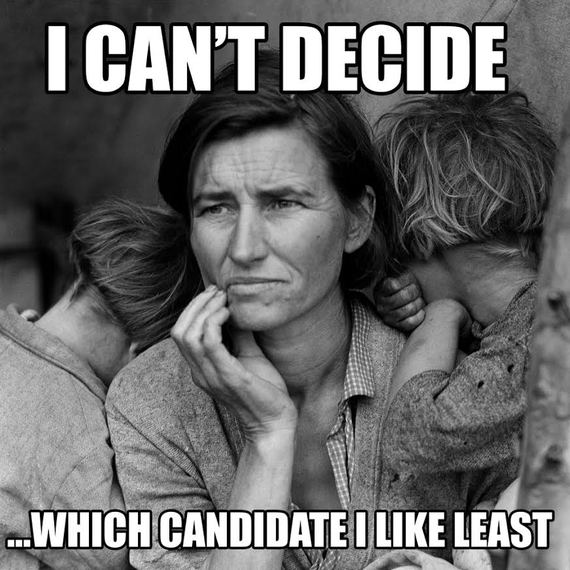 Over the years, I typically get the same two reactions when I tell people I'm a political scientist. Either I get eye rolls, a deep sigh, a dissertation about what is wrong with politics and what ought to be done, or people perk up and tell me how excited I must be about the goings-on at the moment -- asking me my thoughts about current events. Recently, I have been greeted by many who suggest how excited I must be about the 2016 presidential election. Unfortunately, nothing could be further from the truth. In fact, I'm a bit depressed. I'm pretty sure I'm not alone. Welcome to the Great Depression of 2016.

In less than a month, Democrats and Republicans will be officially nominating two of the least liked candidates since polling has been done on the subject. And the disdain for both candidates is with good reason.

Hillary Clinton has engendered anger for decades. She has been described as insincere, disingenuous, corrupt, establishment, status quo, and calculating (and not in a good way). Currently, a majority (54%) of Americans have an unfavorable view of HRC. The strong anti-establishment showing of Bernie Sanders this Spring suggests she is a particularly flawed candidate in an especially anti-establishment year.

Although a political neophyte, Donald Trump has attracted quite a bit of animus himself. Over 60% of Americans have an unfavorable view of The Donald. Bombastic, arrogant, conspiracy-laden, race baiting, misogynistic, and ill- prepared have been among the many words to describe Trump. Like Clinton, he has been well known for years and public opinion about him appears to be relatively crystallized.

The major party candidates clearly have their shortcomings. In November, many citizens will be faced with the difficult choice of holding their nose and voting for Clinton or Trump, voting for a third party candidate with little chance of winning, or sitting out the presidential race altogether. In any of these cases, I trust citizens will recall a few brief lessons they may or may not have received regarding civics in the United States.

The Electoral Process - We got to this point due to the way we choose to select our leaders. Less than 15% of Democrats or Republicans actually voted in their party's respective primaries. Many voices across the political spectrum simply opted out of participating in nomination contests. Others may have felt marginalized depending on when their contests took place (i.e., the writing was "on the wall" regarding the presumptive nominees). Looking forward, Libertarian nominee Gary Johnson is polling at 11% and is receiving a lot of attention as an alternative vote to Clinton and Trump. Yet, due to the winner-take-all feature of the Electoral College, support for Johnson will be hard to come by for many voters. The Electoral College is an institution that strongly hinders third party candidacies. Recall that Ross Perot received 19% of the popular vote in 1992 and did not receive a single vote in the Electoral College.

Our Constitutional Design - A "thank you" to James Madison and the framers of the Constitution are in order for those frustrated that nothing seems to get done in Washington and are tired of gridlock. Our constitutional design (i.e., checks and balances) make change difficult and create conflict in government. Federalism, legislative rules, interest groups, the mass media, and the two-party system are among many factors that fuel political tensions throughout the United States. Sweeping promises to change Washington and "politics as we know it" may be great applause lines, but have little to do with the reality of the American political system. This frustrates some and gives comfort to those who want to maintain a government of laws and not of men.

I became a Political Scientist in part because I always enjoyed studying human behavior. As a kid, I was struck by the breath of politics in the lives of people throughout the world. There is little that government doesn't affect. Some for the better, some for the worse. In any case, living a life outside the reach of government is next to impossible. Thus, it behooves all of us to understand the processes, institutions, and policies of government. Doing so requires us to dig deeper than our chosen outlets and to challenge what we think we know. Socrates stated that "true wisdom comes to each of us when we realize how little we understand about life, ourselves, and the world around us."

Perhaps we shouldn't be so sure that we have the answer when it comes to various issues of public policy. Most likely, issues are relatively complicated and nuanced. Yet, ambiguity and nuance do not do well when it comes to media outlets (both news media and social media). Too often, an image or a meme passes for "research" on issues. We can do better and we must do better if we want to improve the choices we have in politics and the outcomes that occur as a result of those choices.

We should be mindful of John F. Kennedy's warning that "the ignorance of one voter in a democracy impairs the security of all." Fortunately, I am in a field where I get to work directly to reduce ignorance by teaching young people to be critical thinkers who work to understand political processes and issues. While I'm not looking forward to the inevitably unpleasant campaign between Clinton and Trump this Fall, I am looking forward to doing what I can to help produce good citizens. Doing so will be the antidote I need to help cure my political depression. Perhaps others who are suffering in the Great Depression of 2016 can do their part to work through the noise, demand more of candidates, and make decisions based upon fact, rather than impulse.