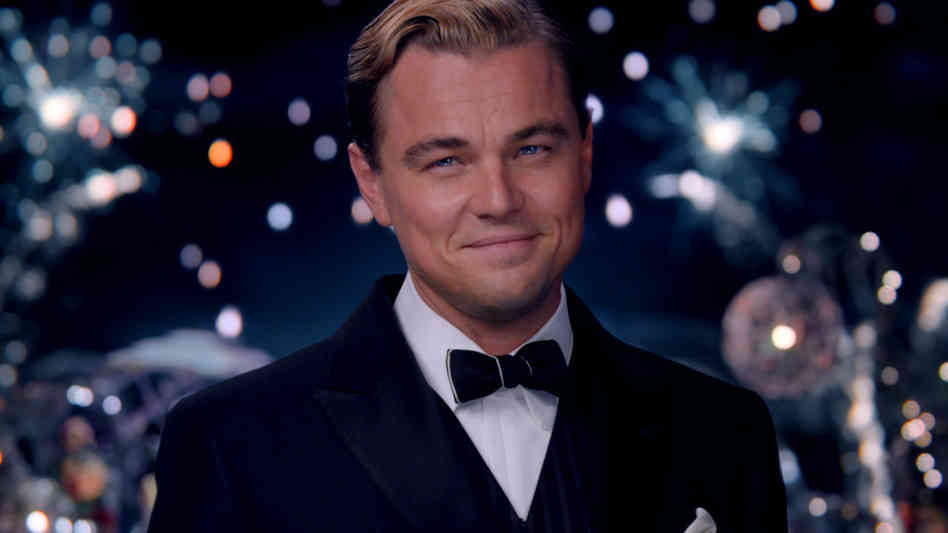 Much is being asked this week of how "true" or "faithful" to F. Scott Fitzgerald's novel The Great Gatsby Baz Luhrmann's movie is. These words of passionate fidelity are somewhat misplaced, always, when speaking of translating any artistic work from one medium to another. Anachronistic moments in the movie have gotten far more attention: use of contemporary music; a Duesenberg instead of a Rolls-Royce; "Rhapsody in Blue" premiering in 1924, and not therefore available 1922; Gatsby's father and the funeral not appearing in the end. However, the movie of this novel is not about re-creating the novel, nor about re-creating the summer of 1922. Here are a few of my favorite movie moments that take something essential about Fitzgerald's wonderful book, and put them into cinematic terms. (I'll have to do this as a multiple post, since I know I'll run over the word limit with the first few. Thanks for staying tuned.)

1) Leonardo DiCaprio. Jimmy Gatz, a/k/a Jay Gatsby, was once a 17-year-old boy with a pompadour and a knowledge of boats, making his way into the world. When he was the same age, Leonardo DiCaprio was already an established actor, soon to be, in the wake of The Quick and the Dead and The Basketball Diaries, a leading man and major star. He first worked with Baz Luhrmann as Romeo, in Romeo + Juliet (1996). The title role he plays for Luhrmann this time is still romantic, but the slender, floppy-haired, beautiful youth with wide chatoyant eyes is a man now. Jay Gatsby is in his early 30s, an "elegant young roughneck" who has been through war and love and crime and loss, through wild financial success and emotional despair. Gatsby, the cipher of a character, is not the best thing about Fitzgerald's novel. DiCaprio, as Gatsby, is the best thing about Luhrmann's movie.

2) Jordan Baker. Jordan Baker's role in the book as Nick Carraway's summer girlfriend and fellow "bad driver" is almost absent in the movie. Fitzgerald's Jordan is a suntanned blonde with gray eyes who takes up important narrative room; she's also a cheat and a liar. In the movie, Elizabeth Debicki as a pale, dark-haired Jordan towers over Tobey Maguire's overwhelmed Nick, and they have no relationship to speak of at all. Strangely, though, I didn't miss Jordan in the movie. I hadn't realized how much time Fitzgerald had devoted to Nick and Jordan, until I saw that space freed up to concentrate on Gatsby and Daisy. The novel's central love story stands out more clearly, in the movie, and Nick's spared a great deal of confusion. The diminishment of Jordan is a major difference between the book and the movie, but I was surprised by how little I minded it, and, indeed, by what a relief it was.

3) James Joyce's Ulysses. When Nick is unpacking at his new house on Long Island, he grins as he takes a copy of Ulysses from one of the boxes. Ulysses doesn't appear in Fitzgerald's novel, but James Joyce is a guiding presence in it. Fitzgerald admired Joyce above most modern writers. The storytelling consciousness in Gatsby tries to accomplish something rather like A Portrait of the Artist as a Young Man or Ulysses. For Tobey Maguire to be holding that distinctive big bluebacked book, just published in Paris in February 1922 and banned at the time in America, is a perfect touch to make Nick Carraway look like a writer.

4) The angry diamond. In the novel, a married couple have a memorable fight at Gatsby's first party. "One of the men was talking with curious intensity to a young actress, and his wife, after attempting to laugh at the situation in a dignified and indifferent way, broke down entirely and resorted to flank attacks -- at intervals she appeared suddenly at his side like an angry diamond, and hissed: 'You promised!' into his ear." It's brilliant, that description of the woman like an angry diamond. In the movie, "The Angry Diamond" is the name of the speakeasy-cabaret where Nick and Gatsby meet Meyer Wolfshiem for lunch. As the venue consists chiefly of married businessmen drinking and cozying up to the dancers, it's a smart, funny use of Fitzgerald's phrase.

5) Meyer Wolfshiem. Race and ethnicity are subtle, important things in the novel. Tom Buchanan is the racist and bigot who disgusts both his wife Daisy and Nick with his comments, but Nick is very disconcerted himself by Meyer Wolfshiem. Nick's Midwestern prejudices and repressions are reflected in his comments on Wolfshiem -- who, in fairness to Nick, shocks and puts off Nick less because he's Jewish than because he's the mobster who's fixed the 1919 World Series. Luhrmann's choice of the elegant, excellent Amitabh Bachchan as Wolfshiem complicates easy, snap definitions of ethnicity, skin color and religion in a way that echoes the novel's resistance to such definitions, too. Wolfshiem carries much weight in the movie, as he embodies the explanation for where Gatsby's money has come from and what his "business" dealings are. As Wolfshiem says in his first line, Gatsby's "my boy."

6) Bad driving. It's a theme of the novel. Car wrecks abound in the book: wheels go flying and fenders crumple, buttons are flicked off coats, cops pull over speeding cars, people die. This rather reflects both Fitzgeralds' driving styles; while they were living in Great Neck, NY, Scott once put a car in a pond, and Zelda cheerfully told friends about "de-intestining" a car on a fireplug. Luhrmann's movie is similarly full of bad-driving moments. Careening cars spill partygoers over the sides, Owl Eyes makes a spectacular wreck after Gatsby's first party, a drag race happens between Tom and Gatsby that's not in the book at all (but reflects automotively the competition between the men), and of course there's Myrtle Wilson's terrible death.

7) The mantelpiece clock. When Daisy and Gatsby meet again for the first time in five years, at Nick's house, Gatsby nervously bumps his head on a broken mantelpiece clock, which tilts dangerously but doesn't fall. Gatsby catches it "with trembling fingers" and rights it, apologizing. Nick says, "idiotically," that it's an old clock, and reflects in the deep embarrassment of the moment: "I think we all believed for a moment that it had smashed to pieces on the floor." Gatsby does knock the clock off the mantel in the movie, and DiCaprio plays his upset and anger, taken out upon the silly old clock, perfectly. It's quite Gatsby to insist he'll send someone over immediately to repair the clock, to try to force the little row of bells and broken wooden posts back into the top of the clock with a rough, and trembling, hand.

8) The green light. In Fitzgerald's surviving manuscript drafts of the novel, there were two green lights at the end of Daisy's dock, and they didn't play much of symbolic role in the book. That all changed by publication time, when one of the most iconic moments in American literature was born. The movie green-lights us to pieces, which is fitting. To have both Daisy and Tom ask Gatsby "what light?" -- neither of them have even noticed it -- is excellent. Gatsby's surprise and frustration is apt; what careless people both Buchanans are not to have noticed such a symbol.

9) Ewing Klipspringer. "The boarder," as he's called in the novel because he comes to Gatsby's parties and simply stays, Klipspringer provides the entertainment, such as it is, when Daisy visits Gatsby's house for the first time. He plays two prophetic, ironic songs, "The Love Nest" and "Ain't We Got Fun" on the piano. But Klipspringer proves a louse in the end. He has moved on to be a parasite elsewhere, and won't come to Gatsby's funeral -- but wants Nick to send him his tennis shoes. He's a lot more fun in the movie, emoting like the Phantom of the Opera over a gigantic gold Wurlitzer organ rather than a piano most of the time. I loved it when, as he lies slumped over the keyboards after yet again drinking too much, his tennis shoes lie on top of the console among the champagne glasses the size of finger bowls.

10) Daisy's hair. Daisy's hair is of an indeterminate color in the novel. In Louisville, it's dark and shining. At Nick's house, it looks like a "dash of blue paint" when wet. When she's speaking of her little daughter Pammy, she refers to Pammy's "yellowy hair" and insists to Nick and Gatsby, "She's got my hair and the shape of my face." Is she a brunette like Fitzgerald's first love, Ginevra King? A strawberry blonde like Zelda, with red-gold curls? It's unclear. In the movie, Carey Mulligan as Daisy is a blonde, but it's clearly dyed-blonde hair. The blonde has brown lowlights beneath it, and her very dark eyebrows make Mulligan's Daisy look, appropriately, both brunette and blonde.