Deutsche Bank has been in the news again, this time for being part of a multi-bank ring that fixed gold and silver prices, an activity the Commodities Futures Trading Commission has not stopped even after "probing" and then closing probes, lately in September 2013, even though price manipulation in silver in gold is rampant. In the words of former CFTC Commissioner Bart Chilton:

"It's been the most frustrating and disappointing non-policy related item since I joined the CFTC in 2007. Our manipulation standard remains too high a hurdle for regulators to overcome; not enough bad actors are being punished."

Many people believe that the USA was on the gold standard until August 1971, but that was not always the case. Commodities expert Hilary Till and history professor Scott Reynolds Nelson believe that the current U.S. situation is much more similar to the post-Civil War (May 1861 - April 1865) bubble, the Crash of 1873, and the subsequent Great Depression of 1873-1880 than to the events around the lessor Great Depression of 1929.

The Legal Tender Act of 1862 made Greenbacks--not redeemable by gold or silver--legal tender. Yet, the world still searched for currency benchmarks, instead of untrustworthy government promises. As speculator William Worthington Fowler noted at the time: "A rise in gold is nothing but another name for a fall in the value of currency."

Financial conspiracies are a USA tradition. I don't mean stories pushed by anonymous commenters who lurk on the internet, or people who send you poorly written emails from yahoo accounts. I refer to daily activity in the financial markets. Present day main stream media financial anchors--who apparently flunked U.S. history--seem capable only of reading scripts given to them without providing any value added. But history repeats itself, especially in finance. 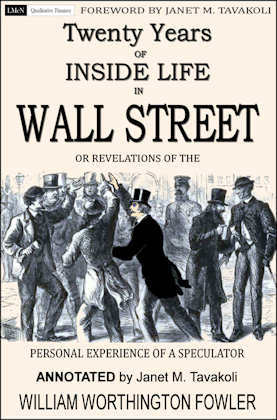 One of my favorite conspiracies is the Gold Conspiracy of 1869. William Worthington Fowler gives us details about this--and much more-- in his famous book, Twenty Years of Inside Life in Wall Street, or Revelations of the Personal Experience of a Speculator.

"Here, sitting at their ease, surrounded by luxury, in a magnificent apartment, with shrewd lawyers at their elbow, two confederates plotted The Great Gold Conspiracy of 1869, and coolly organized the ruin of thousands."

"From April, 1865, to September, 1869, a period of more than four years, the movements of gold had been brought about by artificial means, in conjunction with commercial causes, or rather pretexts. The price of Government Bonds abroad, wars or rumors of wars in Europe, disturbances of trade, the shipments of the precious metal in payment of our imports, sales of gold by our government; these and a thousand other strings were harped upon by the gold gamblers to produce those singular upward and downward oscillations in the price, which enriched the members of the Gold Board, while they disturbed the peace of commerce and beggared a host of infatuated outside dealers."

"Wall Street, like history, repeats itself. Every summer, since 1865, there had been a rise in gold. In March, 1869, gold fell to 131. The astute intellect of Jay Gould now foresaw another opportunity to push up the price of gold, and having purchased $7,000,000 of it, by playing on the strings of the Cuban insurrection, the Alabama difficulties, the prospect of a war between France and Prussia, etc., terrified the bears and rushed up the price to 145. Emboldened by the success of this move, he formed a new and daring scheme."

Since the financial crisis, the U.S. Treasury policy of subsidizing banks with negative real interest rates has resulted in stagflation. Growth is well below the trend line required to fully employ the growing population. Education, food costs, phone bills, and health care costs have soared. The government produces self-serving numbers excluding most of these items to claim inflation is low. Just as in Fowler's time, gold manipulation helps to maintain confidence in our greenbacks as we hold our tenuous position of dollar dominance--made even more tenuous by our feckless Federal Reserve and Treasury.