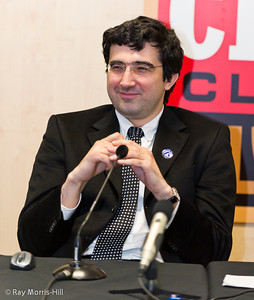 The former world champion Vladimir Kramnik won the London Chess Classic, a tournament that brought the English capital close to its former glory. London was the world chess center in the mid-19th century when the first two important tournaments were organized: the knockout event in 1851 and the round-robin in 1862, both won by the German master Adolf Anderssen, one of the greatest chess attackers. Did the current tournament eclipse the events played roughly 150 years ago?

Anderssen did not like the playing conditions in 1851. The chairs and tables were too low for him, the chessboard too big and the players were confined to a small place. But the German master would have loved to play the London Classic this month. The organizer Malcolm Pein and his team created a great spectacle by inviting formidable players and by presenting the event in an attractive way to visitors and to online fans. Of the three London Classics, this one was the best.

It has been an old tradition to invite presidents, prime ministers, mayors and other well-known personalities to make the opening move in chess tournaments. The tennis star Boris Becker opened the London Classic on Magnus Carlsen's board with the move 1.e4. 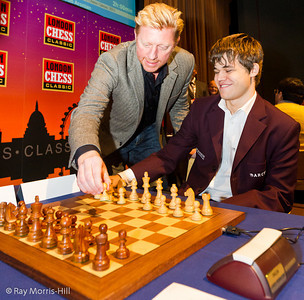 Lots of chess players picked up tennis. There were times when we spent more time with Boris Spassky on tennis courts than across the chessboard. Once in Tilburg we came to the tournament hall with tennis bags just in case our chess game ended early. The Dutch organizers didn't like it. "Gentlemen, you are at the wrong place," they said. "Wimbledon is across the Channel." Now tennis stars visit chess tournaments. With Becker's king-pawn move the London Chess Classic was on its way.

Carlsen took charge quickly, jumped into the lead after three rounds with wins against David Howell and Hikaru Nakamura. Against the top American GM, Carlsen was able to create a powerful storm. You can scroll to the end of the column to replay the games.

The queenside was wiped out and black's rooks are ready to invade white's position. White has to be quick and must take advantage of the knight on f6 - the only tactical weakness in Hikaru's position. 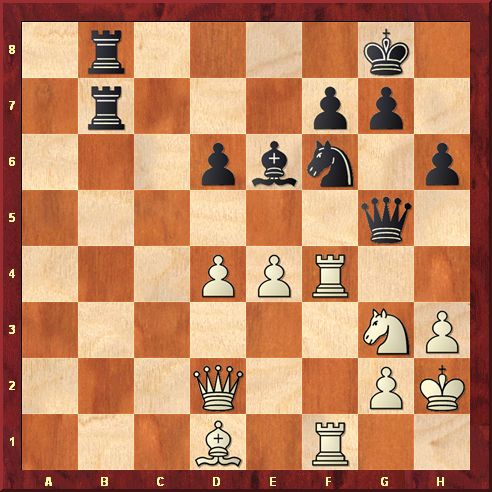 30.h4 Qg6 31.Rxf6! (Magnus is not risking anything with the exchange sacrifice. He splits the black pawns into three islands and can pick some of them off at will. Moreover, Hikaru would have to give up the active play and defend.)

It seemed Carlsen was going to win another event. He performed admirably in the last two tournaments, sharing first prize with Vassily Ivanchuk in Bilbao and with Levon Aronian in Moscow, each time increasing his rating by a few points. But his drive in London suddenly stopped and he was unable to win a game. When he finally won, beating Michael Adams, he was neck and neck with Kramnik. The Russian GM passed him the next day and in the last day of the event even Nakamura sneaked ahead of him.

There is something puzzling about the way Nakamura fights back. He may fool around, slip into a terrible bind, hover between loss and survival, but he is always waiting for the right time to ambush his opponents. His game with Anand is typical. 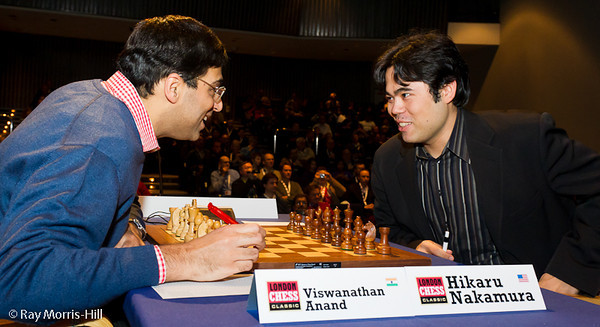 When you watched the opening moves, it was clear that Nakamura was not in Kasparov's coaching grip anymore. The American would get low marks for his opening play in the King's Indian defense, wasting time and allowing Anand free advance on the queenside. Hikaru tried to create a messy position, but he was on the verge of being smashed quickly. The world champion was already close to winning after 21 moves. And then something happened. Anand played indecisively and Nakamura turned the game on a dime, threw his pieces at Anand's king, and when the smoke cleared, he was up in material. 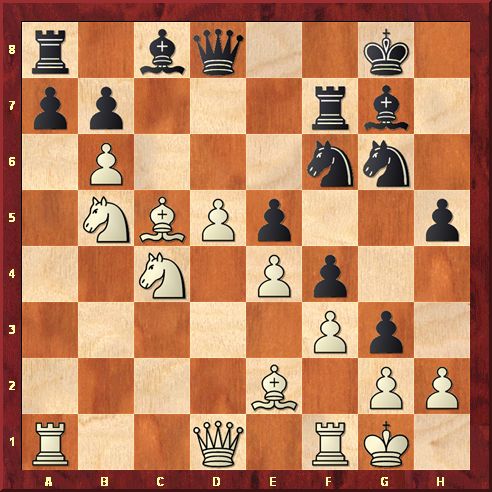 29...Qe8! (Not only attacking the bishop, but threatening to jump to b5 at the right point. The tide is turning, but the chances are still roughly equal.)

32...Rc8 (The white pieces are entangled and black is able to play on both wings.)

Kramnik's victory was inconspicuous, but very efficient. He finished undefeated, drawing with the superstars and smashing the four lowest rated players - all Englishmen. The organizers again used the soccer scoring system to determine the final results: three points for a win, one point for a draw, no point for a loss. Nakamura was the only player who profited from it.

It may look confusing for many players who are used to the traditional values with one point for a win and a half point for a draw. But after having fun with the three-point system, the organizers will have to send a traditional crosstable to FIDE for rating. In this form it can be compared with other tournaments and evaluated correctly.

Still, Carlsen added a few points to his rating and may soon find out how lonely it is at the top of the FIDE list as did Bobby Fischer in 1972 when he was above Spassky by 120 points.
As the world champion Anand knows, he should be performing better than the 50 percent he managed in Bilbao, Moscow and now in London. He called his latest results disastrous, slipping to the fourth spot on the next FIDE rating list. We expect the January 2012 ratings of the top four to be: Carlsen 2835, Aronian 2809, Kramnik 2801 and Anand 2799.

King's gambit and other jokes

For the Armenian grandmaster Levon Aronian chess is a dialog between two people taking place on the chessboard: each move is a statement you can either agree or disagree with. These conversations expanded outside of the chessboard in London. Each round, one of the nine players was free to give a commentary on the games and on chess in general. It sparked great debates, almost as exciting as the games themselves. Chess players love to hear what the superstars have to say. We don't hear them very often, but in London we could.

Even the legendary grandmaster Viktor Korchnoi, 80, appeared on the stage with the commentators. He came to London to play a simultaneous exhibition. Throughout his career he played more than 5000 tournament games, averaging more than 70 games a year. The patriarch of Soviet chess, Mikhail Botvinnik, recommended to play 60 games a year.

Korchnoi still has strong opinions about the way chess should be played professionally. He chastised Nigel Short for playing "a patzer-like move 3...h6" in the French Tarrasch 1.e4 e6 2.d4 d5 3.Nd2. 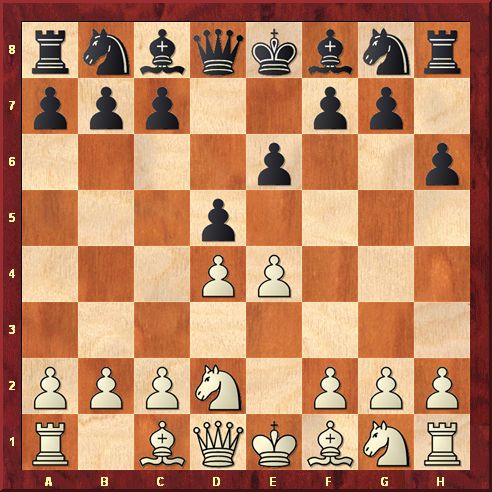 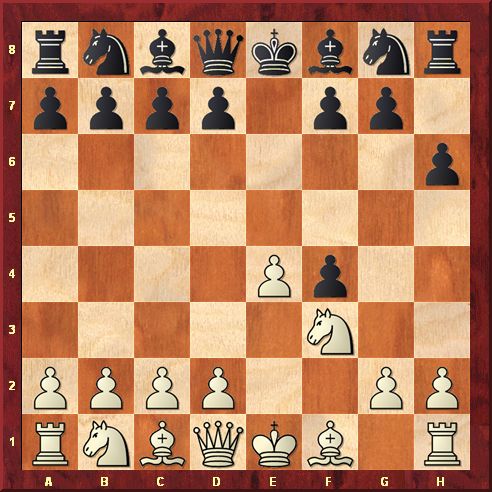 The game quickly turned into Bobby Fischer's set-up after 4.d4 g5 5.Nc3 d6 that the former world champion recommended in his famous 1961 article "A Bust of the King's Gambit." McShane, who played a marvelous tournament, later won the game. Chess works in mysterious ways. What may seem to be a weak move in one position, could be the beginning of a strong, playable defense in another.

Ignoring Korchnoi's comments, Nakamura chose the King's gambit in the last round against Michael Adams. Hikaru was outplayed and busted after 34 moves. Magic happened again and by move 41 Adams resigned. Carlsen, who was accused by Korchnoi of hypnotizing his opponents into making errors, put it succinctly: " Put your opponents under great pressure and they will make mistakes." Perhaps we can add that the King's gambit helped Magnus win the tournament in Medias, Rumania, in 2010.

There seems to be a pattern in the criticism leveled by some graduates of the Soviet Chess School at the young western talents. Vladimir Kramnik thinks, for example, that they should be more serious in their preparation. Carlsen and Nakamura put their hearts into actual playing, instead. Each of them tried to learn more about chess by taking lessons from Garry Kasparov. It's over now, the youngsters left him. It is easy to imagine Kasparov forcing them not only to play precisely on the chessboard, but also trying to influence their lifestyles. Transplanting the strict Soviet chess discipline into the free-spirited young Westerners turned out to be a challenge. It worked better for Carlsen, but Nakamura's coaching relationship with Kasparov ended after he finished last at the Tal Memorial in Moscow last month.

Kasparov showed up in London promoting his newest book Garry Kasparov on Garry Kasparov, Part I: 1973-1985, published by Everyman Chess. It is a nice addition to his monumental nine-volume work on his predecessors, on the opening revolution in the 1970s and his matches with Anatoly Karpov. This time, Kasparov writes about his career up to the end of the 1984/85 suspended world championship match. He was 21, the same age as Carlsen today. The 520-page book is based on his previous works such as The Test of Time, Child of Change and Unlimited Challenge, but goes beyond them. He includes 100 games, improves on his previous comments and on analyses by other writers.

Nakamura took a rather simple view of Kasparov's accomplishments: "His strength was in openings. You look at middlegames and endgames and I am quite convinced there are other players who were better than he was but he was able to get advantages out of the opening, so that was his strength. And when he wasn't able to do that that's when he lost his title to Kramnik [in 2000]." 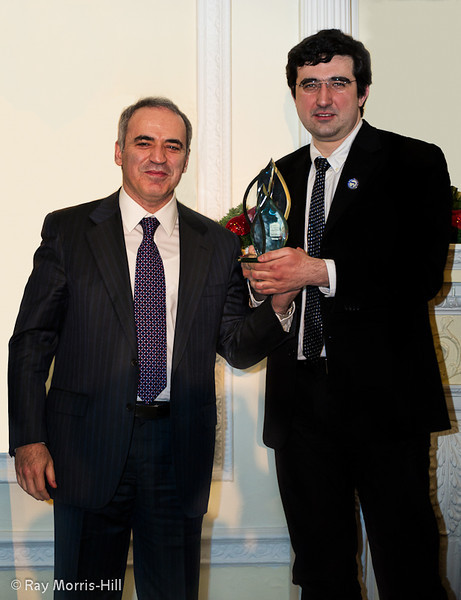 Kasparov and Kramnik in London this month

Kasparov is well aware of what others say. He wrote in his book: "Throughout my life it has been said that I won mainly thanks to deep and comprehensive opening preparation. The art of preparation has been a distinguishing feature of many world champions and has always furthered the progress of chess thinking."