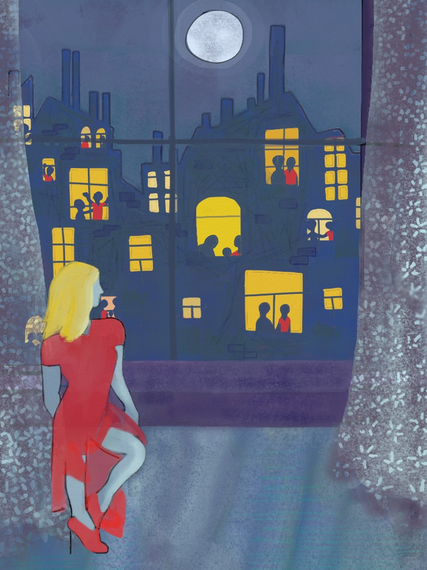 As a teenager with lesbian moms, I was a tad delayed in my heterosexual coming of age. I had breasts by the time I was 9 (which was no picnic), but figuring out what to do with them took another 11 years.

I was like a private detective whose target was straight people and the way they love one another. My first-ever "sex" dream came when I was 15, and it was simply this: I sat in the backseat of a friend's family's minivan. A boy from school, the most attractive one by all obvious criteria, sat in front of me. We both faced forward. He turned around, squeezed my titty, and returned to face front. And this dream drove me crazy for months.

That same year I developed an epic crush on both my English teachers, who happened to be married to one another. I was attracted to three entities: the wife, the husband, and the holy ghost of their heterosexual relationship.

They were tall, attractive, and good at running and mowing the lawn (as my spying told me), and, most appealingly, they liked my papers. They were like my Barbie and Ken dolls dressed as English teachers. Her teeth were slightly crooked, which added authenticity to her perfect heterosexual beauty. She was like Barbie, but with a soul.

I thought about how I wanted to kiss her lips, and when he was teaching, I looked at the butt of his jeans as he wrote on the whiteboard. I read the size on the Levi's tag and thought, "Memorize that size, because that is the perfect butt of a man."

Once she dropped by his class to bring him a sandwich. I found this sensual and made a note of it: "Straight people and their sexy sandwich-dropping habits."

I was mesmerized by male attraction. I once came over to babysit for the teachers, and she showed me the dress that she would wear on their upcoming trip to New York. A red dress. A red, perfect dress for a tall woman. (It should be noted here that I was and continue to be 4 feet and 10 3/4 inches tall. Unless they are from Ann Taylor Loft, dresses tend not to fit me. I am forced to dress like a tiny Republican.)

I imagined how he would look at her in the dress, and I wanted in. I wanted the whole thing: the man, the woman, the dress, the privacy.

I also studied movies. I especially liked, for example, how Billy Crystal and Meg Ryan teased one another in When Harry Met Sally. Straight people in high-waisted pants with permed hair -- I made a note of it. This was sexy. This was heterosexual.

But I was still doing reconnaissance. My own heterosexual love was a ways off.

I saw my moms' affection frequently. They weren't ostentatious, but they kissed and cuddled and teased each other. Of course, straight people were everywhere, but when they were on TV, they weren't real to me, and when they were my friends' parents, they weren't sexy to me. Young English teachers and comedy actors in movies, however, seemed both real and sexy to me.

I wondered how my own attractiveness would play into this larger world stage. I could see how men looked at me, like crazed animals, and it took me a long time to understand that this was an invitation. When I first noticed that look at age 17, my acne was finally gone thanks to the infamous drug Accutane. My clear skin ushered in what seemed like a whole new era, in which men with glazed eyes shot lasers through women's bodies. I had spent so much time striving to be a woman worthy of this attention that, when it came, I didn't recognize it.

Straight love seemed to me patternless and unreasonable. There was only one woman involved. It was chaos. It was utterly devoid of logic, like a dream.

I remember the time when my first serious boyfriend bought me a slice of cake and, while watching me eat it, said,

I was 20 and I thought, "How did he come up with that?" I was flattered and thought it wildly original to compare a woman to a cake.

Read more of Emma's stories about growing up and being a grownup with two moms on her blog, Two and a Half Women.