We were in the middle of the North Pacific with no land in sight, hunting for garbage. One of the crew spotted a bigger object that we harpooned to bring on board. It was a floating tire, and by the amount of algae and rust on it, it had been out here a long time. Getting closer, we saw more garbage. This time, a rubber fishing float. As we slowed the motor to pick it up, the water around the boat started to calm and something else caught my eye -- tiny bits of plastic surfacing out of our wake. At first, I saw just a few pieces, but it became almost unfathomable how many tiny plastic kaleidoscopic colors were ascending out of the water. They had been there the whole time. We were just moving too fast to see them. After hearing about the "Great Pacific Garbage Patch" for so long, I could barely believe it myself; plastic was everywhere. 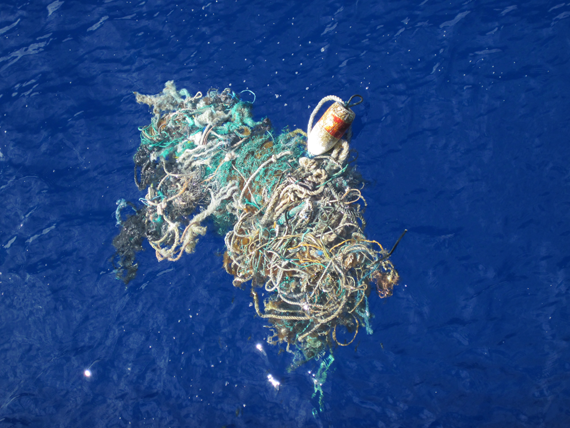 Last year, I had an opportunity to research on the R/V Falkor, a boat owned by the Schmidt Ocean Institute. Falkor was sailing from Seattle to Hawaii on a transit, or "deadhead" leg, and the route would take them right through the North Pacific Subtropical Gyre. They heard about my work months before and I received an invitation to conduct my research on a two-week cruise.

As a PhD student in Biological Oceanography at Scripps Institution of Oceanography at UCSD, I have been studying marine debris and plastic pollution for awhile now, but up until the trip I had never seen it in a live environment, it was always in a lab. When I received the invitation, of course I said "Yes!" Not only because it was free research time, but also because Falkor is one of the nicest research vessels around (there's a sauna!) After some ridiculously quick planning and a nervous 48 hours when I thought my equipment wouldn't make it in time, we made it out to sea.

The North Pacific Subtropical Gyre is the largest continuous ecosystem on earth, covering an area of roughly 20 million kilometers. Due to the way its currents flow, there is a large convergence zone where debris and garbage from around the world gather. Debris has always gathered there, but natural debris biodegrades; our man-made garbage generally doesn't. If it does, it's on such a slow time scale that the gyre has now become a garbage patch of floating bottles and plastic of all shapes and sizes. 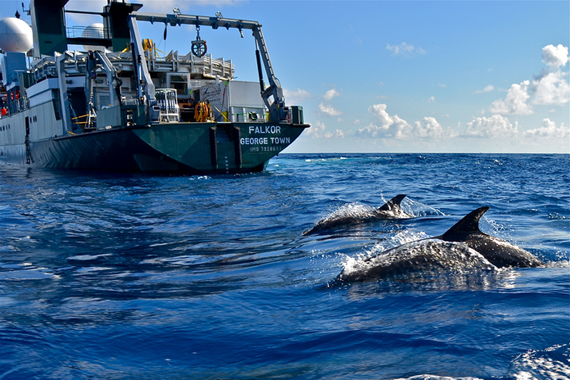 The plastic I was interested in collecting and analyzing is so small sometimes it can't be seen with a microscope; it's a byproduct of larger pieces of plastic that disintegrate into tinier and tinier pieces. This small plastic, though less noticeable, may be the most harmful to the ecosystem because it's small enough to infiltrate the food chain by being ingested by the tiniest animals, which are then eaten by larger and larger animals, including humans.

To test the plastic, I would drop a metal bucket overboard twice a day and filter the water to count the tiniest nanoparticles. Along with this, my goal was to preserve some water for future analysis to measure chlorophyll A and bacterial communities as well. Between the filtering and preserving process, I spent a lot of time on the observation deck, looking for trash and radioing down to the captain to stop the boat when there was a big piece to pick up. 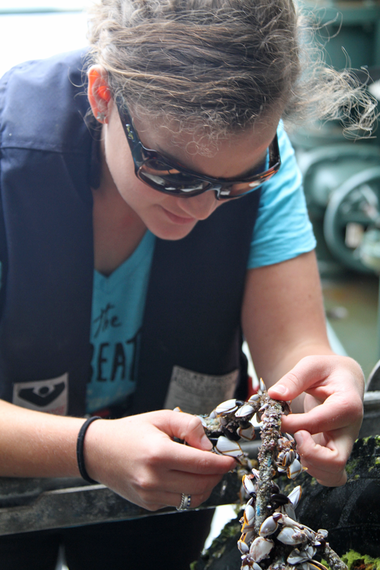 As I sat on the observation deck of Falkor, even I was surprised that there was so much trash. There I was, getting my PhD on that very plastic debris. I was studying samples, looking at pictures, giving presentations and writing public outreach articles, but being there, I finally saw it with my own eyes. I could feel the sea breeze, see sea birds and then suddenly see trash. I needed this experience to really internalize that this is happening today in our oceans.

Before the trip, I gave a seminar to the crew about my research and to prepare them for what we would see. I got the impression that they really didn't believe me. One of the crustier sailors who had been a seaman his whole life, later told me in his Irish lilt, "I thought 'here's another scientist trying to cause alarm,' but it's amazing, you told us we would see fishing floats, bottles and nets. The first day I came up to look and I saw all three. It might be even worse than you made it seem!"

Watching the sailors become obsessed with the trash was one of the best parts of the whole cruise. They started stopping the boat even before I asked them to so they could pick up the big pieces they spotted. Watching their faces as they looked out at the trash made me realize my work is worth it. 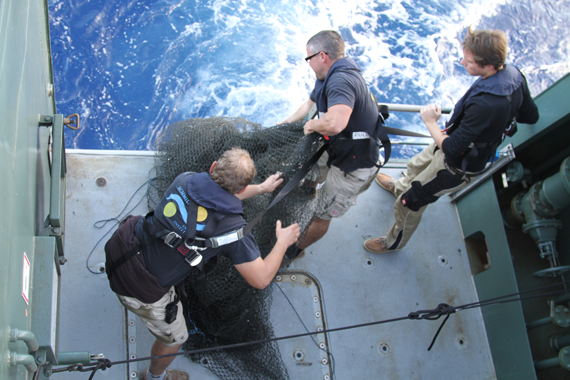 I may not be an activist and I may spend most of my days in a lab, but moments like that, watching others care about the fate of the ocean, means I'm doing something right.

Seeing the trash for myself made me care about it even more; it made everything I research seem that much more real. With computer-simulated models and all-access internet, it's easy to imagine you can really "know the world" via your laptop. But there is an essential need to see things for ourselves, to travel, to do field work, to experience the things we read about.

It's the feeling of being there, remembering a derelict fishing net I pulled from the sea, that will really stick with me. Now when I think of the Great Pacific Garbage Patch, I think of the place first, the facts and figures second.

Close the laptops, pack your bags, and go see the world for yourself, even the problematic parts. You'll be amazed what you learn about things you already knew.