This year, I decided to roast a prime rib for Christmas. And, since I had a large group of food-worshiping people coming over (a dozen of them), I decided to go all the way: a whole prime rib from the best butcher in town. It cost a fortune, but it enabled me to confirm my fondest secret about cooking prime rib right.

First things first: Christmas is a wonderful time to do this. My butcher claims that his ranch sources believe holiday season to be peak prime-rib selling season so they raise their best cattle for this time of year.

Christmas or not, get the greatest prime rib you possibly can. Shop carefully: there are so many variations in quality out there. Just because it's called "prime" rib there's no guarantee the grade of the beef is U.S. Prime! The prime rib is so named because it is one of eight "primal" cuts in the steer (each one amounts to a logical section); this one happens to be from the rib part of the animal, so it is called "prime rib." But most of what you can buy is actually U.S. Choice at best, not Prime. U.S. Prime must be better-marbled to deserve that grade; the extra fattiness brings extra succulence. 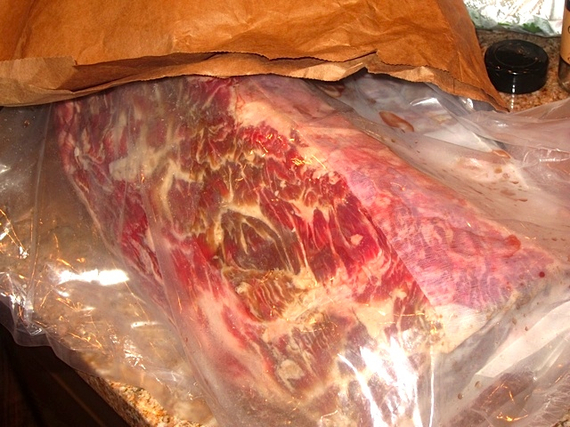 And now comes the secret: invite as many friends as you can so that you may order the largest prime rib possible. This is not my inner glutton talking. This is my inner chef.

A full prime rib (which is what I served) has seven ribs, or bones. 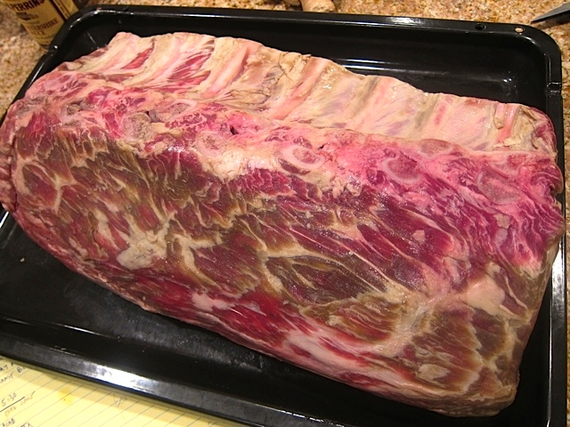 Count the seven bones at the rear of the beef.

But caution! Sizing down your prime rib does not take into account the cooking realities!

Mainly this: if you cook a scaled-down prime rib, it is very difficult to find the right balance of outer crust and inner rare.

Let's say you decide to sear it first in a pan on the cooktop because you want a crusty exterior (the best way to serve prime rib). When it's browned, you put it in the oven at a fairly high temperature (say 375 degrees), which keeps the crust going. When you pull your rare or medium-rare roast out of the oven at the right moment, it will be crusty on the outside, and rare at the eye. So far, so good. But here's the bummer: most of the meat from the edge to the rare eye will be medium or medium-well! You will not have a consistent rare from eye to crust!

Cooking prime rib at a lower temperature increases the evenness of the rare part, but if you try a small prime rib at, say, 275 degrees, it will not have enough time in the oven to develop a crusty exterior!

The only way to get both a crusty exterior and an evenly rare roast. is to select and cook a very large prime rib! Why not go all the way? The full seven ribs is perfect!

So here's what I do:

I take my seven-rib roast out of the refrigerator one-and-a-half hours before it goes into the oven.

Next: salting. Use a great deal of coarse salt (more than you think you'll need), and salt the roast all over. Season with some freshly ground black pepper as well. Nothing else is needed.

Place the roast in a large roasting pan (with short sides), and place in the oven.

Roasting times will vary from roast to roast and oven to oven. 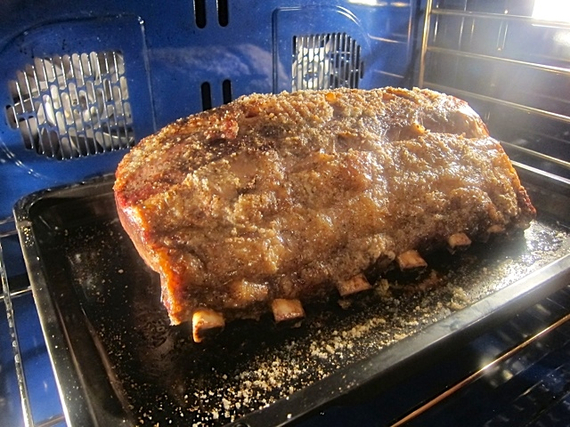 The prime rib early in the cooking. 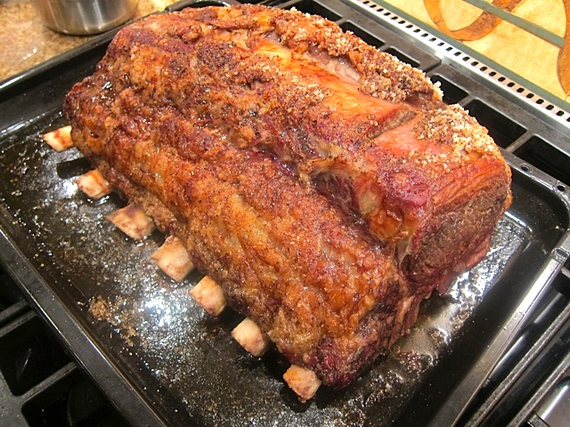 The prime rib later in the cooking. 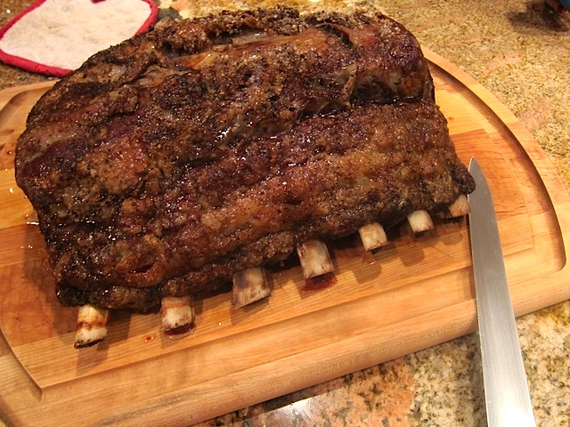 The prime rib is ready. Notice how brown this evenly-rare roast has gotten!

My general guideline for a roast of this size is three hours at 275 degrees. I started testing mine after 2 1/2 hours and found I needed another 1/2 hour to come up to the magic number: 125 degrees on an instant-read meat thermometer inserted into the center. A reading like this on such a large roast will give you lots of rare beef at the center, as well as slabs more "medium" at the ends of the roast (for those few guests who always seem to pop up). 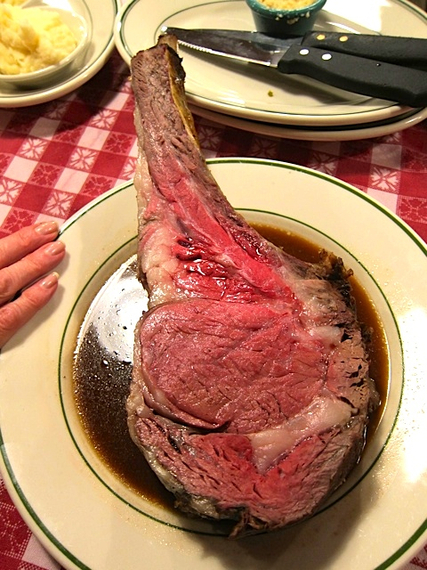 My favorite way of slicing the beef is simple as pie. I cut the entire seven bones off the roast in one large piece, leaving me with a whole boneless slab for slicing. Each person gets an individual bone if desired (I cut the removed rack into seven bones), and each person can have a prime rib slice off the main chunk that's at any desired thickness. In fact, on this Christmas, I tried something new: giving the following form to each guest as he or she arrived. 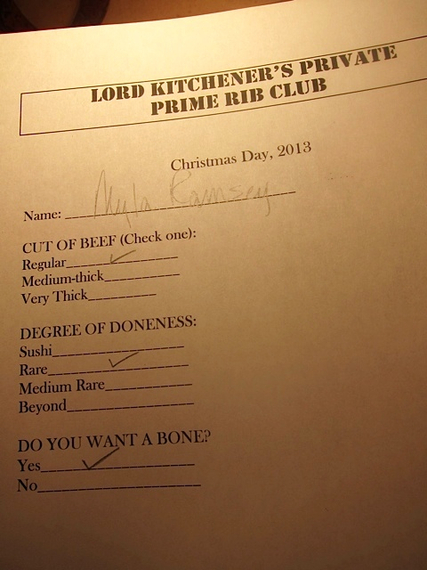 It worked perfectly. And -- phew -- I had just enough bones for those who wanted them! The happiness in the dining room was very even from center to edge.