"What's in store for me in the direction I don't take?" - Jack Kerouac

The Great Ride Forward was a simple idea at first. Working at the USA Pavilion at the 2010 Shanghai World Expo, my friend Hans and I had the opportunity to meet a world's worth of people in a few short months. From the exotic architecture of the Saudi Pavilion to Thailand's 3D films, the restaurant at Peru to the sprawling showcases of China's provinces, the Expo was a hard place to not get excited about traveling the globe. We soon had friends scattered across continents, and the stories they shared fueled our need for adventure. 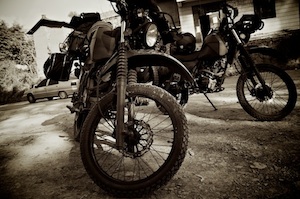 So we took the next logical step. We bought maps and motorcycles, and naturally, set up a secret fort. The maps covered all of Southeast Asia -- southern China, Myanmar, Laos, Thailand, Cambodia and Vietnam. The motorcycles were Chinese-built Shinerays -- 200cc dirt bikes with headlights, racks, and huge gas tanks. The secret fort was our headquarters -- a small electrical room tucked in the back halls of the Pavilion. The humming drone of the industrial batteries set a perfect tone for our scheming.

Over the next three months, red string began to crisscross our HQ, detailing our path for the journey ahead. A suggestion from a friend in Thailand or a new picture in National Geographic would always mean a new pushpin on the map, and the red line would need to be restrung. To ensure our safe and legal passage across borders, we registered our bikes in Suzhou, navigating the often grey world of Chinese automotive laws. The size of our bikes made them illegal in Shanghai (hence the Suzhou plates), so just to be sure, we kept them hidden in an underground parking garage in the city center. Secret fort #2. Following Expo's finale, Hans and I returned to the States to purchase all our riding gear -- Bluetooth-equipped helmets, biking body armor, an army of video cameras, and of course, 1000 stickers embossed with our website.

The final checklist was complete. We had the bikes, we had the gear, and we had the route. It would only be another week until we were finally on the road, traveling the world we met at Expo. Our grand plan was ready to be tested.

It took exactly one day to know it failed.

We rode out of Kunming with high spirits, but the intense sun quickly roasted them away under our heavy riding jackets. The freeway signs overhead pointed us south towards Laos, but the lack of pavement pointed us back the way came. A funny clunk in the engine means a stop, a loose saddlebag means a lopsided ride. The sweaty helmets send a crackling across the Bluetooth mics, our manic conversations about which direction to drive now a static hiss.

All this, and we had just dodged complete ruin the day before. This week was Chinese New Year, and while we had made plans to ship our bikes to a Kunming motorcycle shop well in advance, we were still concerned that our precious cargo wouldn't arrive in time. China, the booming economic spectacle that it is, has an incredible ability to completely shut down over the holidays. Unfortunately, the store owner had also made his vacation plans well in advance. While a simple phone call would have been nice, the sight of the store's locked doors was an appropriate start to our trip. Panicked, sweaty, and unbelievable.

We eventually located our crated bikes at the train station's logistics center, tucked neatly under a crate of fan belts, a few rolls of carpeting, and a washing machine. A hired truck helped us carry our rides to a nearby store, and we went to work reassembling the wheels and racks. We were determined to get out of Kunming and let the real journey begin.

And again, we were burning, broken, and bewildered. The towns whizzed by us, but with different names than the map. A cop tells us to get off the empty toll road, apparently the car-packed country highway is a safer place for motorcycles. The dirt pile blocking the unfinished roadway seems a bad sign. The clearly marked road ahead was clear no more.

And at that exact moment, the Great Ride began. 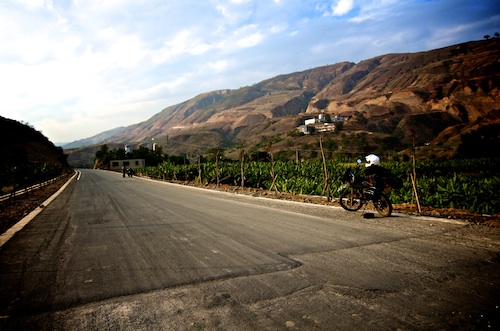 A small pathway up the dirt seemed promising, but before we rode across it, we jumped off the bikes to make sure it didn't lead to certain death. On the other side, several motorcycles parked in waiting, the rides of the road's construction workers. While the bare trail seemed less than ideal, the workers assured us you could ride all the way to the next city.

So off we went, blazing a trail on a yet-to-be-completed trail. Following a river along a narrow, winding valley, the roadside was littered with heavy machinery. Dirt hard-pack was occasionally broken up by cement slabs awaiting their pavement. A sheer cliff dropped straight to the water below, the sandy pathway making the rear tire tremble. The absence of guardrails was the most fear inducing. I told myself to just look straight.

And for the next 100km, through the emptiness of the "highway" and the blackness of the night, we found what we were looking for. That feeling of adventure, that surge of everything new, that rush of doing something you know no one else has done. It was all there on that fragmented highway, something we could never have found if we knew where to look.

By the end of the first day, we knew our simple idea to ride motorcycles across Asia had disappeared. Dehydrated, exhausted, lost, we were in some town we had never even seen on the map. The master route would be impossible, all that tying and retying of the red string was just wasted time.

And we didn't care. The simple idea of not knowing where we were going next seemed more exciting. 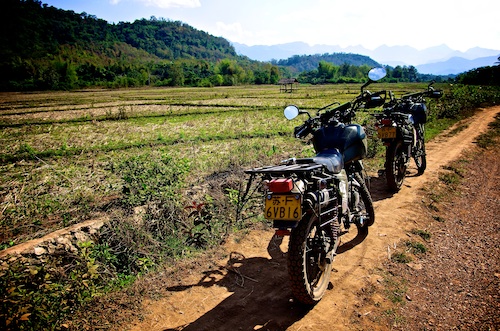