LORD VOLDEMORT, the arch criminal spirit of the Harry Potter children's series, is said to have come from the House of Slytherin. Of course this possibility besmirches the reputation of Slytherin types whose core character trait, they might argue, is more aligned with cunning than criminality. Worse, Slytherins who might not favor Voldemort are saddled by association with he-who-must-not-be-named. 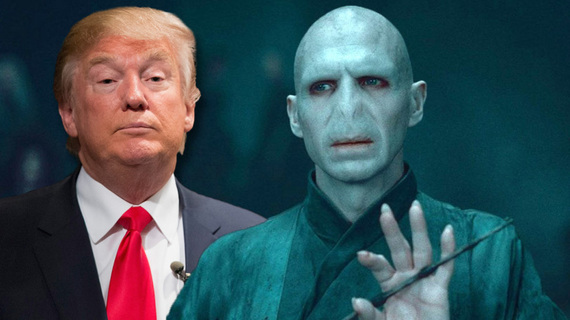 My son, a Potter acolyte, informs me that this is a reasonable analogy for Republicans and their presumptive nominee, Donald J. Trump. Whereas conservatives might describe their essential principle as, well, conservatism, Mr. Trump's manifest gaffes contort that ideology into excruciating knots. Trump is their Voldemort.

This sets into play a great reconciliation -- a sorting to torture the analogy -- by GOP faithful, torn between their core beliefs and the unprincipled, raw power that Mr. Trump now openly wields. Three approaches stand out:

BLACK BALL: Take, for example, the plays being run by the hard-right columnist Michael Gerson. Noting the company that Trump is keeping, he makes clear that those who support him are part of Trump's ill-gotten game. As seen through the lens of The Standard Table of Influence, his play is part call out on conservative compromise and part guilt-laced ping, a heavy hint that he who supports he-who-must-not-be-named is damned to fate and tacitly responsible for Trump's destruction. Another staunch Republican and former Secretary of Defense, Robert Gates, has also risked political Siberia with public musings about a Hillary Clinton presidency.

POWER BALL: At the other end of the reconciliation spectrum are folks you can call pragmatic, philosophic or ideologically, shall we say, thin. Look no further than New Jersey Gov. Chris Christie as the poster child of Trump hangers on. But look too at stalwarts like Bob Dole and John Boehner. It's not what they ever once said about the New York developer that counts (carnival barker, joker, etc.). Tut-tut, it's their current thinking that matters -- interpretations that are fueled by evasive red herrings: Well, I'd rather vote for Donald Trump than ever have Hillary in the White House. Or the declarative and empty fiat: I'm now satisfied that Mister Trump can unite our party and, in fact, make America great again. Accountability to the public record be damned.

DODGE BALL: In the middle are anxious politicos, some evading the question of where they stand, some playing for concessions. House Speaker Paul Ryan emulates both conditions are he stalls for time to measure his strength and leverage, or what's left of it. His plays have been smart combinations of pauses and trial balloons to test the waters and more fiats to reinforce his principled brand. New Mexico governor Susana Martinez is playing a similar game as she juggles the starkly different interests of her hispanic constituents with the impatient, finger-tapping Trump supporters in her party.

Time will tell if divided Republicans, like J.K. Rowling's House of Slytherin, can stand. Abraham Lincoln famously preached it cannot. But Lord Trump has unanticipated powers that few have faced before. They'll need a bigger wand.

Listen to this companion podcast on SiriusXM POTUS 124.