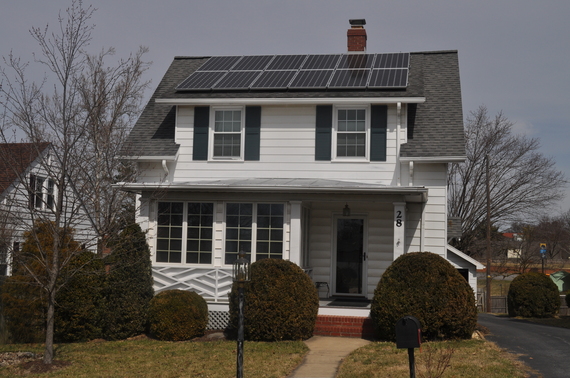 The Great Transition has begun. I know, because our household is part of it.

I speak of humanity's transition from the bondage of addiction to fossil fuels -- addiction that has fouled our air and water, disrupted our climate and ravaged our earth -- to the liberation of renewable energy.

You're looking at our house. On February 4, we installed a 12-panel solar photovoltaic (PV) array on its south-facing roof. In the six weeks since, the array has generated more than half a megawatt of energy, or nearly 13 kilowatt hours (KWH) per day -- during the winter no less. We've generated 25 KWH on our best day, and zero on our worst three days, when the panels were snow covered. We anticipate daily peaks well in excess of 30 KWH during the long summer days. Our daily average usage is about 19 KWH, so we expect to generate, over the long haul, at least 85 percent of our electrical needs. At that rate, the array will pay for itself in 7-8 years. Its projected lifetime is at least 25. 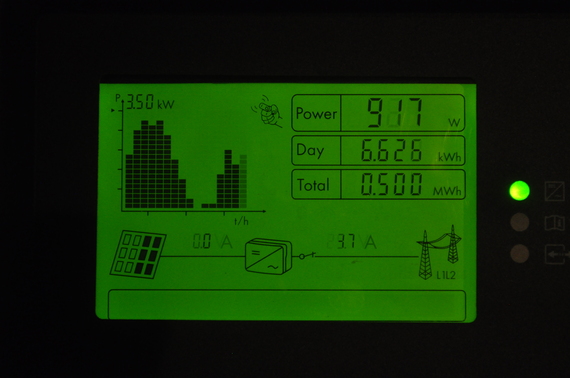 In 2008, while traveling by train in Germany from Munich to Stuttgart, we were amazed to find virtually every south-facing roof covered in PV panels, no matter how small the village. This fact is all the more remarkable because Germany's mean latitude is on a par with Montreal's. Not exactly ideal for solar. Nevertheless, in its march toward fossil-fuel independence, the German government deeply subsidizes residential solar.

Shortly after our return from Germany, I explored the possibility of installing solar PV for our home. I came away disappointed. The cost was prohibitive for our income, given the projected output for our latitude.

What a difference a year or two can make.

In 2007, Anya Schoolman -- at the insistence of her 12-year-old son Walker, who was concerned about climate disruption -- joined with neighbor Jeff Morley and his son Diego to found the Mt. Pleasant Solar Coop. The initiative went from zero (complete ignorance about solar energy) to 60 (effective advocacy) within two short years. By 2009, Mt. Pleasant Coop had spawned DC SUN, which assisted more than 300 homeowners in the Washington, D.C. area with the transition to residential solar. DC SUN in turn spawned MD SUN, WV SUN and VA SUN, umbrella solar advocacy organizations in Maryland, West Virginia and Virginia, respectively. Schoolman now directs Community Power Network, a national non-profit that promotes solar energy and economic development.

In April 2014, Ms. Schoolman was honored as one of 10 "White House Champions for Change" for her pioneering grass-roots efforts in renewable energy. When, later that same month, our local climate-action alliance invited her to speak, more than 100 enthusiastic area residents turned up. At that meeting, Solarize Harrisonburg was conceived. Nine months from the moment of conception, our family became the proud parents of a new solar array, which cranked out kilowatts on day one.

Solarize Harrisonburg is but one of a dozen or more local coops under the VA SUN umbrella. Solar coops exist in Virginia locales large (Richmond), small (Floyd), and in-between (Roanoke and Charlottesville). The tried-and-true solarization process is elegantly simple as outlined at VA SUN's website, and it can be tailored for any community:

Belonging to a coop affords several benefits, tangible and otherwise:

Solar PV installations fall into two broad categories: off-the-grid or grid-tied. Off-the-grid installations require battery storage. Because grid-tie systems are cheaper, most installations remain grid connected. In Virginia, Dominion Power, a monopoly, does not buy back excess generation, one fly in the ointment. Nevertheless, it does support net metering. That is, residents are charged only for the difference between KWH consumed and KWH produced. 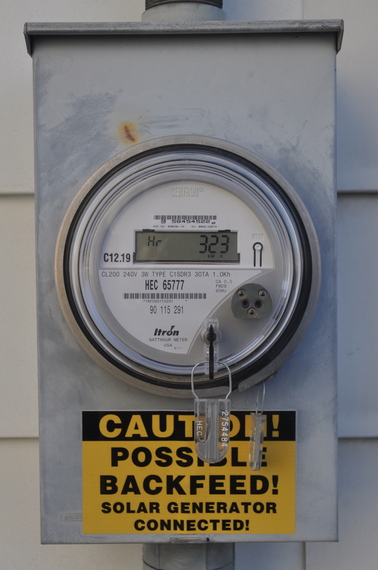 Belonging to Solarize Harrisonburg made our transition to solar both efficient and painless. Making the switch is a natural, sun-powered high. What could be better than simultaneously saving money, helping stabilize the climate, and supporting community?