(Third in a series. See part one: "Please, Sir, May I Have Another?" and part two: "How Wireless Hype is Hurting America.")

After decades of demanding and getting rate hikes and tax breaks in return for promising to deliver broadband internet access to schools, libraries, hospitals and every home and business in their territories, Verizon is now making it clear that it is no longer expanding FiOS, its fiber optic cable service.

So what did they accomplish? What did they build? And how much did it cost? Verizon claims that the company spent $23 billion dollars in rolling out FiOS since 2004. (See, for instance, this message from Tim McCallion, President of Verizon's West Region.) That's a lot of money.

But as I stare at a decade's worth of Verizon annual reports, I notice something odd. Where, exactly, is that $23 billion? Specifically, where are the construction budgets to support this claim?

This chart shows Verizon's construction budgets for 2000 through 2011, taken directly from the Verizon annual SEC-filed reports. It also shows an imaginary "FiOS Bump" -- about $3.8 billion dollars per year in addition to the baseline that should have been spent annually over a six-year period if the company had really been paying out $23 billion dollars for the construction. But the numbers show no bump in construction for FiOS; no major increases in capital expenditures in general. In fact, Verizon, on average, spent more on construction from 2000 to 2004 than from 2005 to 2011. 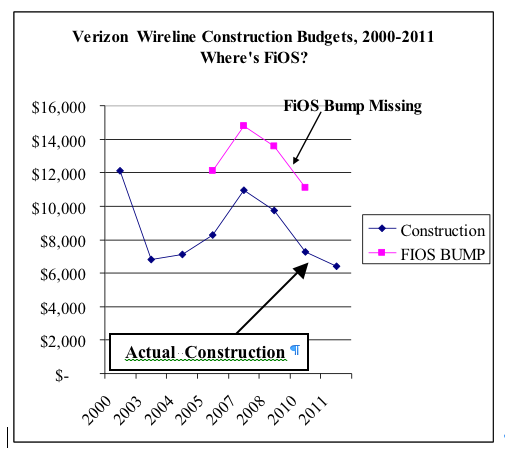 Another way to look at it is this: Construction budgets for wireline services historically equal about 20 to 25 percent of revenues. One could reasonably expect that building out a $23 billion network over seven years would lift that percentage to well over 25 percent a year.

But it didn't happen. From 2000 to 2004, construction amounted to 22.2 percent of wireline revenues. From 2005 to 2011, it was only 19.7 percent. That's actually a $5.9 billion reduction in construction spending in those latter years, compared to what would have been spent had they just continued spending at the same ratio as during the earlier period.

This chart compares revenue and construction costs for wireline services from 2000 to 2011, in millions of dollars.. 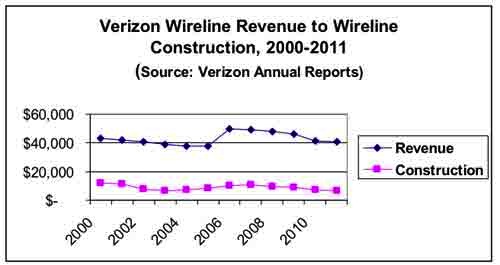 So How Did FiOS Get Built?

Whatever amount Verizon did spend on FiOS -- and obviously it was a not insignificant amount -- would therefore appear to have come out of the standard construction budgets that were supposed to be used to upgrade the lines that most Americans are still using for their phone service: the Public Switched Telephone Networks, or PSTN. It would seem that customers, including seniors, low income families, minorities and municipalities have been funding the construction of a cable service through the hefty monthly fees they pay for a dialtone and ancillary services. In some states this is actually illegal.

If Verizon did actually spend $23 billion, then it appears to have come at the expense of the traditional maintenance and upgrades of the utility plant -- and the PSTN got totally hosed. At the very least, prices for basic phone service should have been in steep decline as one of the major costs, construction, was dramatically lowered.

Instead, Verizon was also getting rate increases specifically to pay for FiOS. For instance, Verizon persuaded New York officials to increase rates for "fiber optic investments," where the only service that could use the fiber optic service was Verizon's FiOS.

For instance, when New York State Department of Public Service Commission Chairman Garry Brown announced the approval of a $1.95 a month rate hike for residential phone lines in 2009, he said "there are certain increases in Verizon's costs that have to be recognized." He explained: "This is especially important given the magnitude of the company's capital investment program, including its massive deployment of fiber optics in New York. We encourage Verizon to make appropriate investments in New York, and these minor rate increases will allow those investments to continue."

Of course the states weren't told that everyone would be charged extra for a service that only some people were going to get. In New Jersey, for instance, Verizon made a firm commitment to rewire the entire state with fiber optics -- capable of 45 Mbps in both directions. It was supposed to be 100 percent completed by 2010. Instead, Verizon claims to have "passed" 1.9 million homes, representing 57 percent of the households in its territories -- but "passed" may or may not mean that they can actually get service.

What has become clear is that Verizon is going to stop deploying/upgrading the wired networks and is instead going to put its money in wireless. As a result, places that don't have FiOS now will never get higher speed services and cable competition from Verizon.

A N.J. state commission report from June 2010 saw this coming, and noted:

"While it is possible for Verizon to extend service throughout its authorized territory, to an additional 155 municipalities in the state that are not included in its current application of 369 towns, Verizon has indicated it will now concentrate its capital expenditures, expected to be between $16.8 billion and $17.2 billion in 2010 on its wireless telephone network. Further FiOS expansion will be limited to increasing penetration in those communities where FiOS is currently available, according to the company."

(The $16.8 and $17.2 billion are the companies' total annual construction budgets, not New Jersey only.)

But as we discussed in our previous article, wireless is simply not a substitute for wireline services, especially broadband or cable service.

So, in New Jersey, one of the states I know best, here is the sequence of events: Verizon (in 1993) get changes in state law that allows them to collect billions of dollars in extra charges and tax perks in exchange for upgrading the utilities. Then, Verizon doesn't roll out the fiber optic network until 2006 -- which is a cable service, but which uses the same construction budgets that were allocated to do the utility upgrades. Then Verizon cancels FiOS, and does not upgrade the utility, leaving no upgrades of the current infrastructure in the state to compete with cable. Instead, Verizon now has its local-service customers paying for wireless upgrades, while more or less abandoning the wires and stranding millions of customers in New Jersey.

So what, at the end of the day, did all that ratepayer money actually pay for? Well, the massive excess profits were used to increase executive pay, pay for investments and losses overseas in hundreds of subsidiary companies, create massive foundations that try to buy off non-profits, and to fill war chests used for lobbying and campaign contribution. It's clear the money didn't go into upgrading the Public Switched Telephone Networks, where it was supposed to bring everyone a fiber optic future.

America is 15th or 33rd in the world in broadband, depending on which international or research group you believe. The failure to properly upgrade the PSTN, and the con of FiOS expenditures, has cost a large swath of America -- from Massachusetts through Virginia and the old GTE territories, such as parts of California -- a generation of technology, innovation and GDP growth.