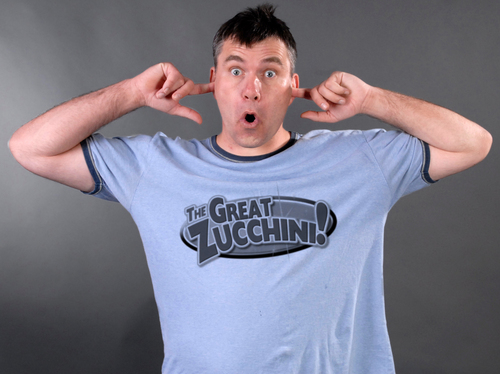 When a kid in the DC area needs help there is always one guy they can count on - The Great Zucchini.

Although he is best known for his unrivaled popularity on the birthday party circuit, The Great Zucchini, otherwise known as Eric Knaus, quietly helps the kids who need it the most. When a sick child needs a laugh Eric doesn't hesitate to visit her in the hospital and if her parents need help with paying medical bills he will donate his time to headline a fundraiser. When the beloved Kids' Farm at the National Zoo was slated for closure, he organized several of his friends to donate a coveted weekend performance to raise money to help keep it open. When the student council at a DC elementary school needed help raising funds for a charity project Eric volunteered to perform in the cafeteria and helped them exceed their goals. In fact, Eric donates his time to so many worthy causes that when I asked my then four-year-old son how we could help our community, his reply was "We can call The Great Zucchini."

So, it should come as no surprise that when Eric learned from longtime volunteer Reshma Yaqub that there was a shelter for homeless families about a block away from his Bethesda home, he not only volunteered to perform but "adopted" the shelter by enlisting several other children's performers to donate their time as well. Although any child living in a homeless shelter could undoubtedly use a little more fun and laughter in their life, Eric realized that children at the National Center for Children and Families on Greentree Road really needed a distraction on Wednesday nights when their parents are required to attend a mandatory meeting without them. Before Eric became involved, Wednesday nights were hard for the kids who often didn't have anything to occupy them while their parents were at the meeting. Eric learned about a girl was despondent when she realized her 10th birthday fell on a Wednesday and that she wouldn't be able to celebrate this milestone with her mother and a two year who old cried when his mother left to attended the Wednesday night meetings and had to be comforted by children who themselves had ages still in the single digits.

With Reshma's collaboration, Eric was able to assemble an all-star team of children's entertainers of all stripes to visit the Greentree shelter to make Wednesday nights a happy time for the kids there. The shows started in March and the children have been entertained not just byThe Great Zucchini, but by a range of entertainers including musicians Mr. Skip, Mr. Gabe, and the Rainbow Rock Band; The Bert the Nerd Thrill Show; a Moonbounce from Great Kids Events; face painting by DC Facepaiting and Jenna Claesen; balloon animals by Dream Face Art; magic by Captain All Star and Captain Silly Bones; puppets and movement by Groovy Nate; clowning by Mandy Dalton; a live animal visit by Reptiles Alive; and science shows by Mad Science and Eric Energy. Local toy store Barston's Child's Play learned of the Greentree shelter through the shows Eric organized and is planning on donating toys, books, and other items to the children as well.

For many of the children at the shelter, the Wednesday night shows are the only live entertainment they have ever seen. Eric, who performs hundreds of shows a year, thinks that his show at the Greentree shelter earlier this month was among most difficult and most rewarding shows he has ever done: "It's hard because you realize what the kids are going through, but for 45 minutes I got to just make them laugh. That felt good." After his show, Eric ate dinner with the kids in the shelter's cafeteria. He and a friend are planning on going back soon to play basketball with the kids in the shelter's gym, which the children are only allowed to use if there are enough volunteers to play with them.

As of now, Wednesday night shows are planned at the Greentree shelter through June. Eric hopes that more entertainers will come forward to help with a show or just to play with the kids who are often left to watch TV on their own when there aren't enough volunteers to interact with them. As for the entertainers that are already volunteering, Eric is proud to be part of such a caring community of children's entertainers in the DC area: "All kinds of entertainers came together to help - no one I asked said no."

According to Eric, the kids at the Greentree shelter just want to be regular kids. Thanks to his help, they get to forget their worries and laugh -- for a least a little -- while each week.