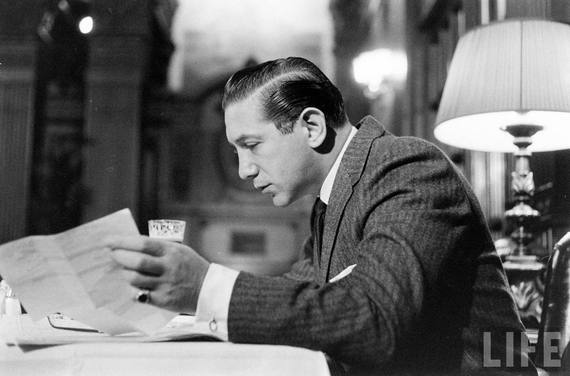 Today I want to write about who I believe is beyond a shadow of a doubt, the greatest (ordinary) retail trader who ever lived. Now by ordinary, what I am talking about is an individual who did not go on to create an Investment Fund as a result of his initial institutional trading. This is a guy who like most of us, got his start in investing through the stock-market, and furthermore he stuck with it and made some sizable profits. Before I go on, I will say that upon my definition I am ruling out individuals like Warren Buffett because although he was very successful as a young retail investor in his teenage years, he also started up a few highly successful Investment Partnerships, and that is what he is known for. The guy I will write about today is known for his successful retail investing. The guy I am going to discuss is a guy called Nicolas Darvas, who's main profession was as a part of the highest paid (at the time) globe-trotting dance troupe. In the late 1950s, in the space of just 18 months, he turned a $36,000 investment into $2.25 million. How did he do this you ask? Read on...

His beginning in the market came in November 1952, when Darvas, and his dancing partner Julia received an offer to be paid in stock rather than cash. Reluctantly Darvas accepted this offer and received 6000 shares of stock in a company called Brilund at 50 cents. With the nightclub being located in Toronto, Brilund was listed on the Canadian Stock Exchange, and after doing a brief bit of research, Darvas was to find out they were a Mining firm. Despite completely forgetting about the purchase for two months, Darvos was to discover the stock price in the paper now showed $1.90. Jumping out of his seat, he sold it and made a profit of $8,000. In his book he says that he felt a kid at a race track and had miraculously had backed every winner. From this point on, he was hooked. However, that initial trade was to prove to be nothing but pure luck. For many years he found that success in the market was going to have to be hard fought. His next trades in the Canadian Exchange were to wipe out the bulk of the profits he had made from Brilund. Mostly as a consequence of this, Darvas decided to move his base of operations to the NYSE. Still though, he found that consistent profits in the market were not forthcoming.

The critical moment in his investing/trading career occurred when he decided that he should not regard the stock market as being like a slot machine. He decided that he needed to use his knowledge, and furthermore he decided that the method he should decide upon should be more technical than fundamental. The key thing here is that he decided to do more of what was working, and less of what wasn't. Shortly after coming to this realization he noticed a stock called M&M Woodworking. In December 1955 its stock rose from 15 to 23.5, and then after a bit of a lull, its trading volume quickly increased and Darvas purchased at 26.6, selling out at 33. He noticed that buying into the stock solely on the basis of it's increasing volume in the market enabled him to operate like an insider, without actually being an insider. The only fundamental filter Darvas utilized into his strategy, was to select companies that have the opportunity to be game-changers in the next 10, 20, 30 years. In the 1950s these were companies in the electronics and biotechnology industries. In the late 1800s it was railroads that were the next big thing. Today it is things like electric cars and clean jet fuels. In any case, the important point he found that worked for him with the stock prices of these companies, was that they were very volatile. He was thus able to profit handsomely from sudden price movements.

The actual strategy that he devised was called the Darvas Box Method, but he himself called it Techno-Fundamentalist Theory. The first inklings for the strategy begun to become assembled when Darvas noticed the trend that stocks oscillated within boxes, consistently bouncing between a high point and a low point. He quickly noticed that these 'boxes' would often pile on top of each other with long-term upwards moving stocks. He would always use trailing stop-losses that would protect him from any serious losses. He implemented this component to his strategy because he found out early on in his retail stock trading career that it is impossible to be right 100 percent of the time. He also found that even if you made profits on most trades, one big loss could wipe out those profits, so it was vital that he protected himself against big losses. He also recognized that it was impossible to sell out on the absolute high all the time, or even most of the time. A stock of his where this example was most clear was Lorrilard, which Darvas noticed a volume spike in from Saigon in late 1957. At the time cigarettes (which Lorrilard was in the business of) were a growth industry, which satisfied his fundamentalist theory. Bought initially at around 26, his position was closed out when his stop-loss was hit a few days later, but then the stock went to 27.3 which confirmed his idea that the stock was moving out of it's box pattern (also accompanied by a rise in volume). As the stock continued going higher he brought more at between 35 and 36.5. After a pause, he purchased more at 38, before selling all out a few months later for 57.

With his innovative strategy, and orginal ideas, I regard Nicolas Darvas as without a doubt the greatest retail stock trader of all time. Once his private fund got up above $2 million he realized that his future movements in the market would have significant effects on any day's trading volume. So after his spectacular run, he toned down his trading. Unfortunately, Darvas was not to have much longer to live, and died in 1977. But not before he earned himself a place among the pantheon of financial market wizards.