In his early twenties, a young man from Switzerland arrives on the Greek Aegean island of Sifnos one May, trying, at once, to discover the colors of nature and, at the same time, his own personal colors.

Christian Brechneff, a painter studying in Europe who is uncertain about his art, opts to travel to Greece to witness the storied light and colors of the country firsthand. His fight with the darkness in the heart of a continent where the days are short and depressive, provokes him to journey to the Aegean islands, the dream of every aspiring European artist at the time.

Upon arriving at Sifnos' primitive port of Camares with no serious tourist infrastructure to speak of, Christian wanders along to the town of Apollonia, trying to find some form of accommodation. Eventually, he manages to hook up with some other young worldly travelers and ends up at Platis Gialos, securing a spartan room in a house with few amenities.

In his book of memoirs entitled The Greek House, Christian describes in vivid detail and color how he is able to progressively engage with and enter the lives of the islanders who are deeply suspicious of strangers. Eventually developing numerous friendships, he becomes, in effect, a xenos (stranger) who chooses to love them and become a part of their culture. They, on the other hand, slowly offer him their warmth and trust, making him feel at home.

The book rolls like a movie, depicting the integration of the young Swiss painter and his love affair with Sifnos as he passes through the beautiful villages of Apollonia, Artemonas and Exampela and visits the island's splendid monasteries, partakes in the local feasts and fairs and adopts the habits of the villagers.

Through the pages of the book, based on the author's personal notes, we see his gradual evolution from stranger to local, incarnating the islanders' traditions and triumphing over their suspicions of any new arrivals to the island.

Christian also reveals the dubious relationship he has with his parents, describing it thoroughly in the correspondences he shares with them. This relationship slowly improves through the book, as if in tandem with his acceptance and love for Sifnos.

While Christian tries to discover his sexual identity, he is, in principle, attempting to hide his sexual orientation from the conservative locals. On Sifnos, he develops relationships and indulges in sexual relations with beautiful and desirable women. Away from the island, however, he takes up with handsome men that seem to attract him more and more as the years go by.

Given his admiration and many friendships with the inhabitants of Sifnos and its frequent visitors, Christian ultimately chooses to formalize the bond by buying a home in Exambella. The house is formed and transformed as if a part of his existential identity and depicts the character of an island sunk in drought, white and blue.

Christian learns to accept his identity, eventually finding himself as a painter and as a man. He no longer has any need to hide his fears behind the isolation of a new, distant land and is free to be himself anywhere on earth, even in the Switzerland of his origin.

As he develops and matures, he becomes critical of Sifnos' inevitable march on the road to becoming a tourist destination, receiving, as it does, ever increasing waves of visitors. Losing the uniqueness and the title of "xenos" (foreigner) amongst the islanders, he feels a need to desert the place and detach himself from his ties to it.

It is during this period that he meets his American partner, Tim, and becomes very attracted to the United States. "Christos" as the Sifniotians call him in their Greek, loving way, is forced to admit that his relationship with Sifnos essentially ends when he marries his partner in a civil ceremony.

As he readies to harbor himself in a new port, he no longer has any use for the house on the island that can only bring back fond memories of his restless past.

The Greek House is a book that offers many clichés surrounding the relations between the many tourists who have fallen in love with Greece's islands and their inhabitants. What makes it an intriguing read, however, is the evolution of its protagonist from "Christian" to "Christos" and, once again, back to "Christian!" 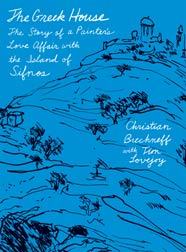