Factory management ignored warnings to evacuate when cracks were discovered in the building. Thousands of garment workers followed orders to return to work the next day. The building caved during the morning rush hour. It was the deadliest factory disaster to date in the clothing industry.

Many have blamed major brands such as the Gap and Walmart for their lack of concern for safety standards in the factories where their clothing is produced. The scant coverage of the anniversary where so many innocent people were killed is an example of how easily we can turn a blind eye to the suffering to which we are inextricably linked as consumers.

After the Rana Plaza tragedy, documentary filmmakers Hannan Majid and Richard York returned to Bangladesh to make their second film on the plight of garment workers. Their latest documentary, Tears in the Fabric, is an intimate portrait of the fall-out from Rana Plaza long after the world has moved on to other news items.

The film quietly observes the toll the disaster has taken on one woman named Razia Begum. She lost her only two daughters in Rana Plaza and now struggles to care for her three surviving grandchildren. The tragedy rendered Begum and her grandchildren homeless. She has yet to receive any financial compensation from factory management or the major brands.

Majid and York have a remarkable eye for images that reveal the humanity and vulnerability of their subjects. The worn-down toothbrushes, dingy blankets, a bright pink flip flop tossed on a cold cement floor. These are the kind of visceral details that make you feel the fragility of the family trapped in this predicament.

As Begum struggles to survive, her days are haunted by the memory of her daughters and the horror of the building collapse. Begum leads the filmmakers to an area in town where the Rana Plaza wreckage has been dumped. The rubble is strewn with clothing that was produced in the factories. She pulls a pink hoodie from the debris and shows the label to the camera.

Later, Begum stands outside the cemetery where her daughters wishing they will somehow speak to her. In town, Begum explains she still hopes to catch sight of her daughters' faces in the crowds of workers outside the factories. It feels as if this wishful thinking not only defines her despair, but provides her only relief from it.

Tears in the Fabric is a film that is not afraid to look grief squarely in the eye. And that is no small feat in a culture that can so easily go numb to the grim realities behind our consumption.

I recently had the opportunity to interview the filmmakers about their process and current conditions in Bangladesh's garment industry.


JFB: What has changed in the garment industry since the factory collapse shined a spotlight on the human price of high street fashion?

MAJID: There have been a few changes. One of which is the right to form unions. This is a huge step in the right direction. Previously, young women would be intimidated, threatened and beaten for being a union member or for taking part in protests.

The minimum wage for garment workers has increased by 77 percent since the disaster. For a worker who has a family the wage is still insufficient, but it has risen.

Also, the Fire and Building Safety Accord has helped enforce stronger safety standards. Action is slow, but factories are being thoroughly inspected and even closed down because of safety violations.

JFB: Both of your documentaries about the garment industry in Bangladesh highlight the efforts of the National Garments Workers Federation (NGWF) to establish a safer more equitable work environment. You portray this union as a beacon of hope in an otherwise hopeless situation. How has the Rana Plaza disaster affected the work of the union?

MAJID: The NGWF were there at the collapse helping in the rescue operation. They were in the hospitals helping the injured. They helped in getting the government to pay for medical fees. They made sure the factories paid the last set of wages. And they also gave money from their own funds to hospitalized victims. Some of the victims are now surviving only because of the assistance they receive from NGWF.

YORK: The local NGWF were the first on the scene and were literally digging through the rubble with their bare hands to free the trapped workers. I think that by throwing themselves in like that, they really gained the respect of the whole community.

JFB: Tears in the Fabric documents the suffering created by the reckless production and consumption of street fashion. What kept you from falling into despair as you worked with such painful subject matter?

MAJID: I think one thing that prevented us from falling into despair was the knowledge that nobody else was reporting it like this. We really took it on the responsibility to give a voice to those who lived through this disaster.

We've been making observational documentaries for almost ten years now and we always allow ourselves to be led by the people we're filming. We've never wanted to embark on a film project with a specific agenda, even to the extent that we rarely prepare questions for our subjects. We always ask them what we should filming, rather than dictating what we have in mind.

This became even more important when we met Razia Begum. Her experience spoke volumes about the world we live in. We could see the film would not only be important for people to watch back in Europe and in the States, but also a way for Razia to begin to deal with her loss. By speaking out, Razia realized that her daughters' deaths would no longer be anonymous. This realization helped us hold our nerve while collecting the footage.

JFB: Many of the survivors of the Rana Plaza disaster and their families have still not been compensated for their losses. Your film offers a glimpse of the misery and desperation caused by this lack of financial support. What role do the major brands play in this situation?

MAJID: It's important to show the reality of what is happening to the victims of Rana Plaza. People like Razia are in desperate need of assistance. She has grandchildren to look after and no permanent home. She is in this mess is because of the collapse of Rana Plaza. The income of her daughters and son-in-law was enough to pay for a home, food and the kids' school tuition. Now she doesn't have a home. She lives off other people's good will and handouts from the union. Her grandchildren were kicked out of school because they couldn't afford the fees. They now attend a school for the orphans of Rana Plaza. Razia is just one of many families whose life was totally destroyed by Rana Plaza. The loss of a child is something that can't be replaced. But the brands can at least compensate these families so that they can start to rebuild their lives.

JFB: Your film is not easy to watch without wanting to help in some way. Do you believe your audience can help improve the lives of garment workers in far-off countries? What should we keep in mind as consumers?

YORK: In Bangladesh is that there is no desire among the workers for us, as consumers, to boycott the brands. They value the international garment trade for what it has done not only for their own families, but also for the development of Bangladesh. It has granted a far greater degree of freedom and emancipation to women across the country, particularly for those who have travelled from the rural areas and now work for their own wage, often supporting an entire family back in the village.

However, surely it's not so much to ask that the people who are making our clothes not be forced to work in death traps. Pressure needs to be put on the brands to take responsibility for the factories in which they manufacture their products and the conduct of those factory owners. Paying people low wages is one thing but treating them like animals, or like slaves from a previous century is quite another.


Tears In The Fabric is a co-production between Rainbow Collective and Open Vizor. The documentary will be able to stream for free at www.tearsinthefabric.com. The website also features a gallery of photos related to the disaster and a video library of survivor testimonials. 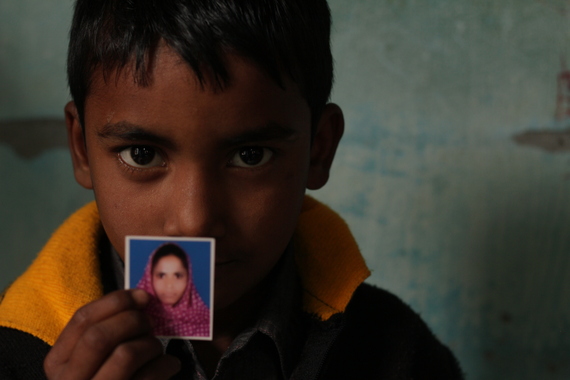