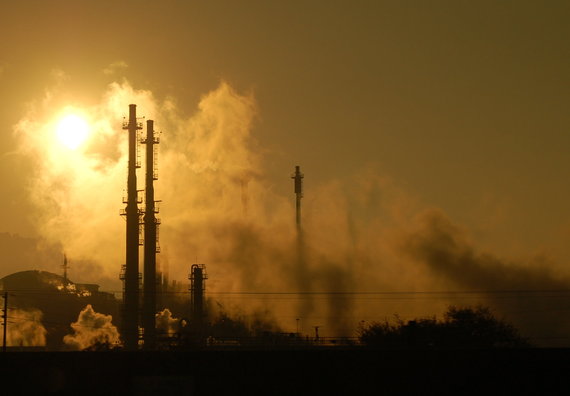 Guests staying at a modern hotel in Sochi, Russia, for the 2014 Winter Olympics recall signs in English next to their water faucets that read: "Do not use on your face because it contains something very dangerous."

Russia spent a staggering $50 billion on the games to impress the world but could not offer visitors a basic: clean water to drink or bathe with.

Sochi's water is an example of the massive environmental degradation in the former Soviet Union that began in the 1920s when Josef Stalin ordered industrialization at all costs to catch up with the West.

An irony is that although the USSR took hundreds of thousands of environmental shortcuts while industrializing, it never did catch up.

The countries that emerged from the Soviet Union still haven't caught up with the West, and their pollution continues unabated. The main reason is that, rather than modernizing their industrial and power production, which would increase efficiency and reduce pollution, most continue to use ancient, toxin-generating techniques and equipment -- in industry, petroleum, mining and utilities.

As might be expected, the Mr. Big of the former Soviet Union -- Russia -- remains the biggest polluter in the region.

But every country where a factory was built, an oil rig set up, or a mine opened also continues to pollute.

Russia has the dubious distinction of having the world's worst air pollution, according to international experts. An assessment in 2011 that supported that conclusion noted that only 15 percent of Russian city dwellers breathe unpolluted air.

In fact, two Russian cities have long been listed as among the 10 most polluted in the world.

They are Dzerzhinsk, a chemical-weapons-production center during Soviet times, and Norilsk, a big mining and metallurgical city.

Three hundred thousands tons of contaminants from chemical-weapons production were buried in Dzerzhinsk between 1930 and 1998, according to a study by Green Cross and the consulting company Blacksmith in 2011. No fewer than 190 different chemicals contaminate not only the earth but also the groundwater, the report said.

The study blamed the pollutants for a surge in eye, lung and kidney cancer in the area. The researchers noted that the average life expectancy in the city and its surroundings in 2006 was only 47 for women and 42 for men.

And the Guinness Book of Records listed Dzerzhinsk as the world's most polluted city in 2007.

Mining and smelting spew more than 2 million tons of sulfur dioxide, 500 tons of copper dioxides and 500 tons of nickel dioxides into Norilsk's air each year.

It's no wonder, then, that the life expectancy of production workers there is 10 years less than Russia's national average.

Although Dzerzhinsk and Norilsk are two of the planet's worst air polluters, Russia has a lot of other environmental nightmares.

One is Lake Karachay, where the nearby city of Chelyabinsk dumped radioactive waste from its nuclear-materials processing facilities during Soviet times.

The lake is so radioactive that visitors are warned not to walk along its shores for more than an hour, lest they suffer irreversible health damage.

You can see mind-boggling signs of pollution in the mining and smelting city of Leninsk-Kuznetski. Coal dust and ash cover the ground, and the Ilya River is so full of chemicals that it will not freeze in winter even when the temperature is well below freezing.

One reason Russia's pollution continues to be so bad is that the country has never devoted adequate resources to addressing it. Part of that is ideology. President Vladimir Putin has said publicly that manmade climate change is a lie that Western countries have perpetrated to try to hold back development in Russia and other countries.

Another former Soviet republic that has suffered major environmental disasters is Kazakhstan.

The USSR's Moscow-based leaders forced the Kazakh Socialist Republic to open one of the world's largest nuclear tests sites in 1949.

Hundreds of tests in the air, on the ground and below the surface near the city of Semipalatinsk led to thousands of birth defects and cases of cancer and other diseases in the area -- a legacy that continues today.

Kazakhstan's other major environmental tragedy is the loss of what was once one of the world's largest lakes -- the Aral Sea -- due to a Soviet decision in the 1960s to divert the rivers feeding it to cotton production.

At one time the lake supported a thriving fishing community whose catch was shipped across the Soviet Union.

Despite attempts to restore it since Kazakhstan's independence in 1991, the Aral Sea is now a tenth of its original size. And soil that used to be under water has dried up and been carried off in dust storms.

Although less industrialized than other Soviet republics, Armenia has had its share of environmental problems as well.

With no money to fix its decrepit, Soviet-era water system, the capital of Yerevan, for example, does not have a fully functioning wastewater treatment facility.

The Debed River contains high levels of lead from industrial discharge, and streams and rivers in the Ararat Valley have high concentrations of arsenic, cadmium and other pesticide components.

Armenia's main approach to solid-waste management has been to burn it, which, of course, generates tons of air pollutants each year.

What can the former Soviet Union do to begin addressing its massive environmental problem?

Devoting more money to clean-up would be a start.

Russia, the country from which most former Soviet republics continue to get their cues, is pumping billions of dollars into building up its military, however, leaving little for anything else.

And before a country devotes money to cleaning up its air, land and water, it must make a major commitment to do so -- which won't happen in Russia, for example, as long as its leaders believe manmade climate change is a hoax.

It's unfortunate that the big losers in the giant environmental shrug-off going on in the former Soviet Union today are the people of the region. They are the ones who will suffer the health consequences if pollution stays at its current levels or gets worse from additional industrial, oil-production or mining development.