This is going to take some getting used to.

Thomas Eakins' celebrated "The Gross Clinic," purchased jointly for $68 million in 2007 by the Philadelphia Museum of Art and the Pennsylvania Academy of the Fine Arts, has just been returned to public view on Saturday as part of a larger exhibition (to Jan. 9), after a startlingly transformative restoration overseen by Mark Tucker, the museum's vice chair of conservation and senior conservator of paintings. The overall tonality of the painting is now considerably less dramatic and more subdued, "as Eakins intended it to be," according to the Philadelphia Museum's press release.

What I'm wondering is how the entire cast of the painting has changed so dramatically, through a restoration that the museum insists was accomplished strictly by filling in losses. It does appear (from comments made to the Philadelphia Inquirer, below) that the conservators painted over Eakins' own underpainting, from which the top layers had been scrubbed away by overzealous restorers in the 1920s.

See for yourself. Here are the before and after pictures, provided by the museum: 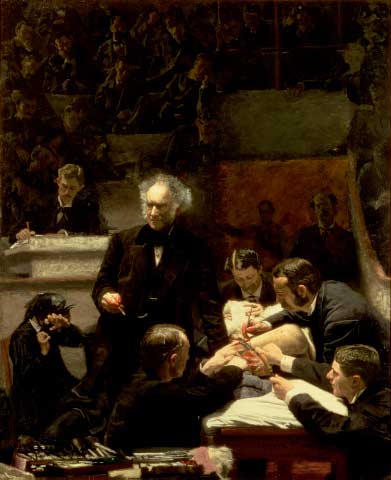 Thomas Eakins, "The Gross Clinic," 1875, before restoration, Philadelphia Museum of Art and Pennsylvania Academy of the Fine Arts 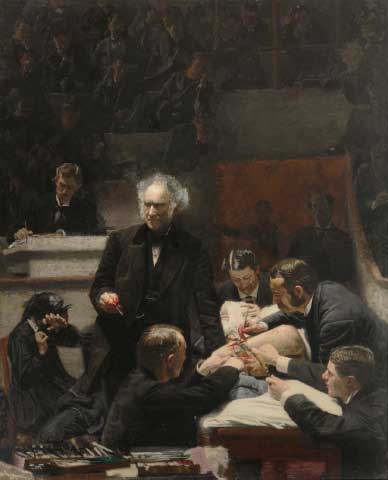 The same painting, after restoration

The restorers themselves acknowledged the difficult issues posed by this formerly overcleaned painting, in the conservation information posted on the Philadelphia Museum's "Gross Clinic" website:

For many years, owners and restorers often did not understand the intentional low key of Eakins's paintings, and felt they would be improved if they looked brighter and higher in contrast. Cleanings motivated by such thinking broke through and removed the final veils of paint Eakins had used to perfect the relationships of tones.

The lighter and more colorful foundation layers exposed by overcleaning were never meant to be seen in finished pictures. This is what happened in the "The Gross Clinic's" operating theater tunnel; Eakins underpainted it in the red-orange color, adding the dark tone and figures to the painting at a later point. Attempting to lighten this dark passage, a restorer in the 1920's discovered the color underneath and, for whatever reason, preferring it to Eakins's deep tone, inappropriately uncovered it.

By clicking the Conservation Plan tab on the same website, we also learn:

The removal of the 1961 varnish and retouching in the cleaning will reveal the actual state of "The Gross Clinic," that is, the condition of Eakins's paint with all the alterations and incidental damages incurred over 134 years exposed. At that stage of the treatment, the visual gap separating the painting's present appearance from the way it looked originally will be widest; however, what survives of Eakins's own work will also be clearest.

The question of what should be done, ethically, philosophically, and practically, to reconcile the changed appearance of a painting with its original state is the defining challenge at the core of every restoration. The path to be taken in our restoration of "The Gross Clinic" will be the subject of ongoing discussion as we move through the present examination phase, and into the treatment.

The museum's officials discussed the outcome of that "ongoing discussion" with Stephan Salisbury of the Philadelphia Inquirer, for his recent article on the restoration.

"It's only by patching in at a microscopic level every little loss that we see here and working with the documentation that the picture starts to come together again," Tucker [the conservator] said.

"Restoration is provisional. It reflects taste," Tucker said. "It used to be denied that it reflected taste, but we admit the bias. So in this restoration we are going to take the tunnel back tonally to where it is here [in a 1875-76 Eakins wash drawing]. Now the rules of conservation say you can't change the known character of the original. Well, we're not doing that. We're changing a damaged area. This is not original paint surface. This is an underpainting....

Said Foster: "It's completely reversible. You can get back to this [unrestored state] at any time."

There's more by Salisbury about the restoration, here.

Notwithstanding my misgivings about a transformation that appears to be a Tucker recreation as much as an Eakins restoration, I'm pleased to see that at least one long-time wish of mine has at last granted: Thomas Eakins' two medical masterpieces -- "The Gross Clinic" and "The Agnew Clinic" -- will finally be exhibited side-by-side.

Although both have long resided in Philly, this is said to be the first time that they've been seen together in the same room. 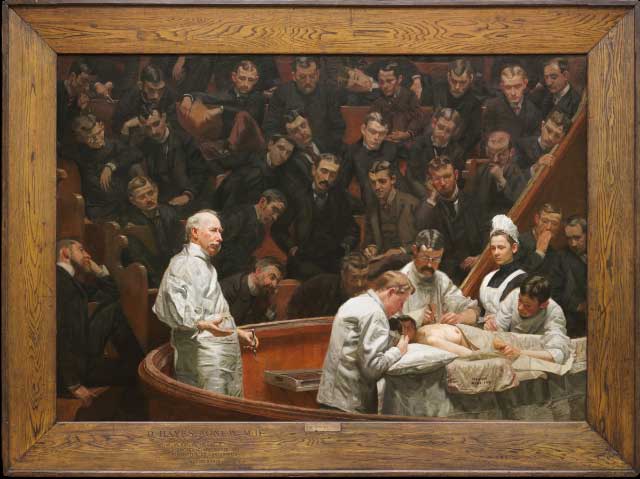 Eakins, "The Agnew Clinic," 1889, on long-term loan to Philadelphia Museum from the University of Pennsylvania