Last Saturday, unarmed citizen Michael Brown was gunned down by the police. You would think that conservative gun groups like the NRA or the GOA would be rallying around the Brown family, and demand justice.

But they haven't even mentioned such an event.

The shooting, which took place in a St. Louis Missouri suburb known as Ferguson, has received plenty of media attention, as Brown was gunned down. There are so many angles that gun groups could take. They could condemn the police for killing an unarmed citizen. They could insist that citizens should arm themselves for protection against the government (police).

But they didn't use either of these arguments.

Francis Wilkinson, who wrote the article "'Jack-Booted Thugs' With NRA Approval" for Bloomberg View, already looked into this, concerning the NRA at least. Here's some of what he wrote.

"I wonder: Has the shooting death of the Missouri teen traumatized [Wayne] LaPierre into silence? After all, Twitter is full of images of police dressed in camouflage and looking for all the world like a powerful government militia terrorizing the citizens of Ferguson. The NRA has previously lamented "black-suited, masked, massively armed mobs of screaming, swearing agents invading the homes of innocents." LaPierre has expressed grave concern over "federal agents wearing Nazi bucket helmets and black storm trooper uniforms to attack law-abiding citizens." Surely, if anyone in the U.S. is concerned about police forces abusing their lethal powers, it must be LaPierre, self-styled guardian of individual rights, protector of the little guy, scourge of overzealous government agents. Yet once again, an unarmed black boy or man has been shot dead by police, and LaPierre is silent. I just can't figure it out."

But Wilkinson may not realize that the NRA is not the real conservative gun group out there. You'd think it was the NRA, but it is actually the Gun Owners of America (GOA), the group you see bringing heavy weaponry into eateries to make customers feel more safe. 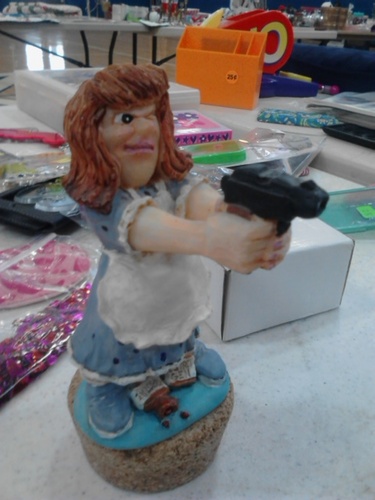 I went to the Gun Owners of America site to find outrage over Brown's shooting by a Ferguson cop. It wasn't mentioned.

They did have critical "open letters" to politicians they didn't agree with. There was the "self-defense corner" with stories where someone used a gun to save a life, a gun debate on MSNBC from a few weeks ago, Obama, a UN treaty that would confiscate guns, but nothing about Brown.

According to the St. Louis media, gun sales have skyrocketed. Whether it's fear of the police or fear of looting from reprisals, those sales have spiked at least 50 percent, and possibly 400 percent. You'd think that would warrant some commentary, if only to stand by Brown, or the police, or residents.

Conservatives are always looking for ways to reach out to the African American community. This is one area that should be pursued, but is being ignored for some reason.