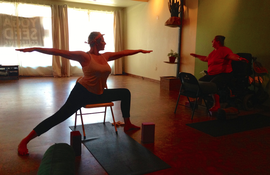 At first glance, it seemed like any other yoga class; the instructor circled, encouraging us to assume Cobra, Warrior One, and Downward Dog positions. We complied with the usual exhales and grunts of exertion but this class was different -- the participants all remained seated as they stretched and contorted their bodies into yoga poses.

There was Milly, a spirited middle-aged caregiver who had broken her knee some months before. Facing a long rehab after surgery, she didn't like to take prescription painkillers and "lie around watching too much depressing television," so she joined this special yoga class. It was only Robert's second day doing yoga, but faced with severe emotional issues that set upon him after a back injury, he felt the class was already making a big difference. And across from me in a wheelchair sat Ellen, living her life with cerebral palsy but refusing to let the disease conquer her.

"Everywhere you go you should be able to bring yoga with you," M.L., the dynamic instructor at Yoga Seed Collective in Sacramento, California, announced. I'd learned that Therapeutic Yoga, or T.Y., is gaining in popularity in the U.S., a movement that the medical and psychological communities consider as holding legitimate health benefits.

The main benefit of yoga is in the breathing of course, something that's accessible to everyone, regardless of his or her physical circumstances. "We live in the inhale. We come to yoga for the exhale," M.L. says as she regally travels around the room, putting her hand on a bending back here, encouraging a proper arm placement there. The benefits of deep breathing first came to Western light in the 1970s, when Dr. Herbert Benson, founder of the Mind/Body Medical Institute at Harvard, found that practicing meditational breathing, such as in yoga, helps lower blood pressure, improves heart health, and reduces stress levels.

Out of this idea that the mind could help heal the body, the field of therapeutic yoga was born. Further studies, like the one conduced by John Kabat-Zinn, Ph.d. at the University of Massachusetts Medical School and published in the American Journal of Psychiatry, reinforced the role deep yogic breathing and meditation play in reducing the effect of anxiety, stress, and panic disorders.

"Therapeutic yoga is one of the best ways to learn how to listen to your body from the inside out," says Kelly Russ, a certified yoga instructor who teaches healing yoga all over the world. "It's a great way to develop a deeper understanding of how the breath transforms and heals your body-mind connection." 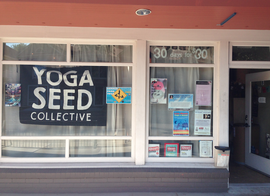 Though more scientific research is welcomed, yoga has been found to have many medical benefits. It shouldn't be seen as a panacea or replacement for traditional medical care but serves as an alternative treatment path. Studies have found that yoga helps anxiety and depression, insomnia, pain management, high blood pressure, Post Traumatic Stress Disorder, and helps boost the immune system. While yoga may not cure diseases per se, it's a terrific complementary practice to holistic wellness and quality of life.

Even NFL football teams like the Seattle Seahawks have implemented mandatory yoga for its benefits of healing, flexibility, and injury prevention.

At studios like Yoga Seed across the country, Therapeutic Yoga (T.Y.) is a term that includes several other forms of yoga under its umbrella. The intent is always to include people with health issues, needs, or challenges into the benefits of yoga. There are All Bodies Yoga, Seated Yoga, Adaptive Yoga, and Gentle Yoga classes. In addition, Yoga Seed is involved in yoga outreach programs in prisons, psychiatric hospitals, and schools for children with behavioral problems.

The results are astounding. At the Heritage Peak Charter School, site director Ruby McDowell reports, "The students who have attended yoga regularly in the past year have had fewer disruptive outbursts and have been able to focus on their school work and remain in school."

At the Yoga Seed's outreach program in the CSP Sacramento and CSP Solano maximum-security prisons, the benefits of 15 years of yoga programs have mirrored the findings of an International Journal of Yoga Therapy study, which reported, "Re-incarceration rates significantly declined from 67.5 percent to 25.3 percent for participants who attended regular yoga/meditation classes."

At the Sutter Center of Psychiatry, the Yoga Seed Collective's new outreach program that offers yoga classes four times a week has been a blessing for patients and staff alike, who, "commonly observe and report improvement in patient's mood and reduced anxiety levels." 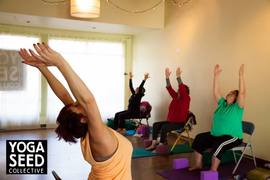 Everyone can benefit from yoga, no matter if they are confined to a hospital bed, a wheelchair, a prison cell, or incapacitated by severe depression. And though yoga has caught on around the country, it's often perceived as a practice for affluent and already athletically gifted people, somewhat competitive and often downright "snooty."

However, the true beauty of yoga as taught by Yoga Seed and other practitioners of T.Y. is that it's for everyone -- no one is ostracized or turned away, no matter what health, medical, or emotional challenges they face. Those challenges don't always come from within but from society's marginalization. That's why the gay community has its own Queer Yoga class at Yoga Seed and there are classes for Native Americans at the Sacramento Native American Health Center.

The responsibilities of T.Y. teachers go far beyond those in a typical yoga class. They need intensive training that surpasses that of a traditional yoga instructor; each person is as unique as their body with different needs and limitations, and so being educated and aware about medical issues is paramount. Instructors need to have trauma sensitivity training and know how to assess injuries and offer encouragement. According to Yoga Seed, the qualities of a great T.Y. teacher are that they exude a sense of safety, predictability, consistency, and are open to feedback - far cries from just being flexible, in shape, or knowing the poses well. They don't just challenge their students but give their students the opportunity to challenge themselves. It's a subtle distinction, but one that any good T.Y. teacher appreciates.

Even the words they use around Yoga Seed and T.Y. is different, a lexicon of empowerment coined, "People First Language." P.F.L. acknowledges that the disability descriptor is just a medical diagnosis, not who the individual is as a human being. For instance, it's not "wheelchair yoga" but "seated yoga," not "he has brain damage," but "he suffers from a brain injury," and not "she is mentally ill" but "she has a mental health diagnosis." "Normal" or "healthy" children become, "children without disabilities." When someone isn't "confined to a wheelchair" but "uses a wheelchair," they are automatically emancipated from a critically restrictive self-image. Perhaps my favorite example of People First Language that M.L. shared with me is the term, "currently able bodied," signaling the inevitable fact that every single one of us has physical setbacks or health problems some time in our lives, rendering judgment moot.

The movement needs new teachers. It goes far beyond the standard certification to become a yoga instructor, which is an accomplishment in it's own right. T.Y. instructors require a whole additional skill set; intimate knowledge of their student's medical issues, challenges, and limitations. A teacher's role in the classroom ranges from basic instruction to emotional encouragement to actually helping manipulate bodies into poses in Adaptive Yoga, which a stroke victim might require. "If you have extra energy, share it with someone in the group," M.L. says, subtly forming an emotive bond between those in the room.

The requisite teaching hours to become a Certified Therapeutic Yoga Therapist were recently increased from 500 to 1,000. While it's important that T.Y. teachers are well trained, those in the profession hope the extensive certification process doesn't become prohibitive, discouraging new teachers. There are plenty of volunteer opportunities for those looking to earn their certification hours and become a part of the team.

Towards the end of our hour long class at Yoga Seed, we concluded class with the traditional yogi singsong chant:

JAI!
Victory to the Light!"

Milly, Ellen, and Robert seemed notably more relaxed and enlivened by the time the class ended, stretching like cats in the sun. We all packed up our things and M.L. thanked each of them warmly and accompanied them to the door.

"It means so much to them," she told me as she folded up chairs and rolled up yoga mats, the studio empty except for us. "You know, when I show up to teach, Ellen is always waiting out front, 15 minutes early for every class. She has to take public transport an hour just to get here. That's a huge adventure for someone in a wheelchair, but it means so much to her. You know, even though I'm the teacher, I really think these students give much more back to me."

Victory to the light, indeed.