The U.S. public debt is currently $9 trillion. That's an average debt for 303 million U.S. residents of about $30,000, or for 135 million U.S. taxpayers of about $67,000. (The numbers are about six times bigger if we add unreported U.S. liabilities.) This debt is being financed by our children and by the rest of the world, at the cost of U.S. influence in the world arena.

U.S. debt has grown 14-fold in real terms over the past 65 years. It grew five-fold during World War II and since Reagan's accession it has grown another 350 percent. Under Reagan the United States flipped from being the world's largest creditor nation to being the world's largest debtor nation. The growth of the national debt slowed and briefly reversed during the Clinton years, but then resumed its rapid upward march. (See chart.) 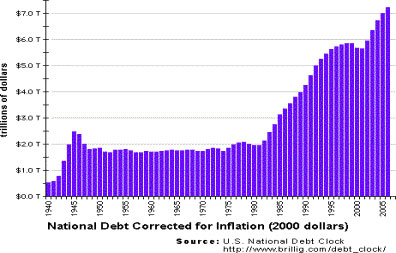 In World War II, we sold the debt largely to ourselves, for example through savings bonds to pay for the war effort. During the Reagan and first Bush Administrations, Asian countries were persuaded to contribute to U.S. war efforts with gifts and loans, out of gratitude for our bearing the main burden of the Cold War arms race. As U.S. budget and current-account deficits have continued, the Asian loans have accumulated. The eight countries with the highest foreign-exchange reserves are all Asian. (See Table 1.) 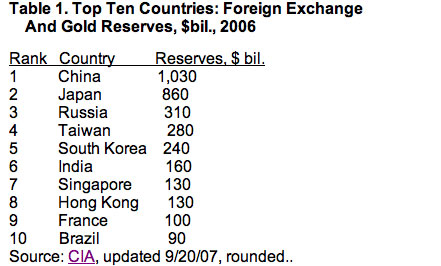 Of 163 countries covered by the CIA, 99 run current-account deficits and only 64 run surpluses. It takes the surpluses of the top eight of the 64 surplus countries to pay for the $862 billion (in 2006) deficit of the largest deficit country, i.e., the United States. The Japanese yen and other Asian countries have not appreciated as much as the euro because their central banks have been accumulating dollar securities, thereby financing the U.S. current-account deficit. The countries with the highest current-account surpluses either export manufactures or oil and gas, or have substantial overseas investments. (See Table 2.) 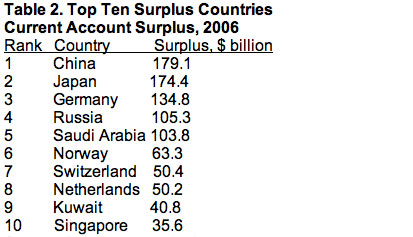 Source: CIA, updated 9/20/07. The current account surplus is the trade balance (net exports of goods and services) + net factor income from abroad (such as interest and dividends) + net unilateral transfers from abroad (such as foreign aid or workers' remittances from overseas).

These developments help explain the 42 percent decline in the value of of the dollar to 0.70 euros from its high on October 26, 2000, when the dollar was worth 1.21 euros. Currency appreciation is supposed to help fix trade imbalances as a weaker U.S. dollar discourages imports and encourages exports. But it may not happen as quickly or smoothly as we may wish. A Chinese statistics official observed that during recent years when Japan's currency appreciated three-and-a-half times, its trade surplus with the United States grew eight-fold.

Unlike private companies that must now report pension-fund liabilities via Form 5500, the U.S. Government does not include its social insurance fund liabilities in the national debt. The GAO in January 2007 estimated U.S. government liabilities including net social insurance commitments at about $50 trillion. The U.S. Treasury concurred and added: "$50 trillion [is] approximately four times the nation's total output (GDP) in FY 2006, up from about $20 trillion, or two times GDP in fiscal year 2000... This translates into a current burden of about $170,000 per American or approximately $440,000 per American household."

Does it matter who is financing U.S. current-account deficits? It will matter if the United States has disputes with its creditors. Thomas Jefferson favored eliminating the national debt, arguing that "banking establishments are more dangerous than standing armies." A possible trillion U.S. dollars in China's central bank and another $100 billion in Hong Kong are the global financial equivalent of standing armies. At the moment, China is heavily reliant on U.S. consumers to buy its products. But one price of our growing debt is a shrinking ability, and right, to control what happens in a dangerous world.