Though on a day-to-day basis we talk about how best to stretch a can of chipotle chiles or how to make cookie-like scones, the sub-plot of our blog has everything to do with friendship.

We've known each other since 1997, when we met in 7th grade, in the middle school corridor. Since graduating college, moving back to New York, and starting this blog, we've been lucky enough to have those very same friends from 7th grade often at our table, eating our food and hanging out. For the most part, we catch up with our high school girls over elaborate potluck buffets. Of course, we've made friends outside this circle too, and we invite them over as well to share in our cooking. But unlike most non-New Yorkers living here, we haven't had the experience of starting over in a new city, without the people we grew up with.

Our friend Rachel, whose father was the beloved dean of our middle school, recently moved to Chicago for love (as in her boyfriend, now husband). To New York, she left behind Cara's older sister, Jill, and many other close high school girlfriends. To chronicle her social journey, Rachel has started the blog MWF Seeking BFF about the search for a best friend in her new city.

Though she seems to be doing amazingly fine on her own (both off-line and on), Rachel enlisted our help in planning an at-home friend gathering for some of the potential BFFs she's met over the last few months whom she otherwise mainly sees one-on-one. We happily obliged, deciding to test our menu out on some new New York faces. We each invited two girlfriends from different circles and had Phoebe's roommate Caitlyn do the same.

Since Rachel doesn't think of herself as a practiced home cook, we did try to think of a meal that was stress-free, but we were more focused on what sort of menu would best facilitate the kind of easy bonding that we know we'd want at a dinner party with new friends. We landed on a pizza party. 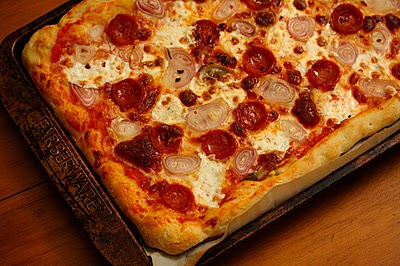 The pizza party can be interpreted in one of two ways. If you're feeling enterprising, and you have lots of oven space, it can be a make-your-own affair. This is also best if you have a fear of awkwardness: making the pizzas together gives you and your guests something to do--and then talk about--to break the ice.

But, since it was a hot night and we wanted to have the oven on as little as possible, we decided to customize the pizzas ahead of time. This actually works pretty well for a new friends party too. We figured Rachel might not be familiar with her guests' dietary restrictions, and a make-your-own pizza party could potentially create chaos and/or reveal character flaws that Rachel might not yet want to see. There might be the girl who leaves the cheese off her pizza because of a new diet she's trying, or someone who hogs all of the cheese and greedily snatches up pepperoni slices before anyone else has had a chance to include the ingredient on their pie. These things aren't so deplorable. But after much thought, we would say it's a safe bet to get to know new friends' tastes and habits by seeing who goes for which flavor, rather than by judging them on how neatly they arrange onion slices.

Cara likes to make her own dough, but I'm usually in a hurry, and resort to the ever-awesome New York City solution: buy it from a pizza joint. The man behind the counter may look at you like you're a little crazy. But then he'll slap the ball around in some flour, toss it in a bag, and charge you $4.50.

That last little cut corner also make the make-your-own-pizza party incredibly easy for a fledgling cook, and has been part of the reason why since the original mention of this pizza party, I have heard of so many others cropping up around New York, bringing together faces new and old to eat up and get sauced. 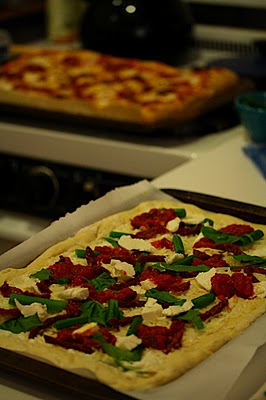 Bake for 10-15 minutes, until the crust has browned and the cheese is bubbling and brown in spots. Remove from the oven, sprinkle with salt, hot pepper, and grated parm if you like. Rest for a minute or two, then cut into slices and serve.

Spoon the sauce over the pizza dough and spread with the back of your spoon. You want every inch to have some sauce, but not be overly saturated. Sprinkle the cheese over the top of the pizza. Arrange the shallot and pepperoni slices over the top. Add some coarsely torn fresh mozzarella (if using).

Bake for 10-15 minutes, until the crust has browned and the cheese is bubbling and brown in spots. Remove from the oven, sprinkle with salt and hot pepper or oregano if you like. Rest for a minute or two, then cut into slices and serve.