Let's say you picked a portfolio of stocks on January 1, and a year later it had appreciated by 40%. Great job!

How would this portfolio look on a daily basis? On any given day, it would go up or down in a somewhat unpredictable manner. Let's say the standard deviation of daily variation was 1%. This is actually a little low for the stock market. Since there are about 250 trading days a year, the average gain in one day is about 0.135%. So, we can see that the daily variation (1%) is much larger than the daily average gain (0.135%). If you made a histogram of it, it would look vaguely like a bell curve, with the center just a tiny bit to the right of zero. There would be almost as many losing days as winning days, and of roughly equal magnitude.

I mentioned that Goldman has been making its money "somewhat like a hedge fund." What I mean by this is: it is mostly not making it through traditional fees, or through traditional banking. It is buying and selling securities in the secondary market, for profit. Why this activity should be government subsidized, I don't know.

However, as we look more closely, we see that Goldman operates like virtually no hedge fund does, or even could. There are a few with similar strategies, but even they can't reach the "mysterious" levels of profitability that Goldman has, and certainly not on Goldman's enormous scale.

In the first half of 2009, Goldman made $18 billion from "trading and principal investments," plus another $4 billion from net interest income. This is a total of $22 billion, before operating expenses. On an annualized rate, that's $44 billion, using $50 billion of capital, or a gross investment return of 88%. Not too shabby.

Some of this is honest business. The company noted $2 billion of old-fashioned equity commissions, for example. As for the rest of it, it is something of a black box.

This magic touch does not seem to spread to Goldman's actual hedge funds. Goldman Global Alpha, a giant multibillion-dollar fund, apparently fell about 80% in 2008 -- after losing 39% in 2007. The fund managers stepped down on March 31, 2009.

We can get an idea of how Goldman operates by looking at their record of daily gains and losses. Over the sixty-five trading days of the second quarter, Goldman made a profit of greater than $100 million on 46 days. It lost money on two days. (This was actually an improvement on the first quarter, when it lost money on eight days.)

Amazing. Whether in a down market (1Q) or an up market (2Q), they never lose! 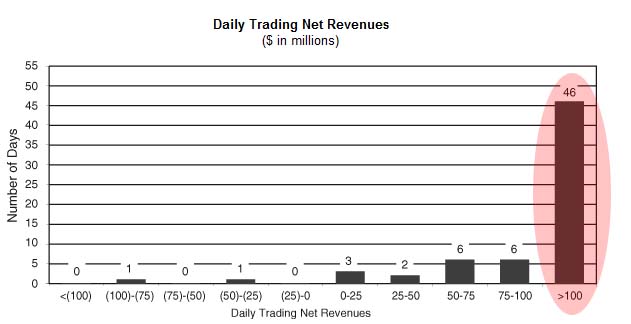 There are a lot of very good traders in the world, but nobody has that sort of record on any sort of consistent basis unless they've managed to rig the game.

You can be "the smartest guys in the room" but nearly-perfect records at the poker table are almost always an indication that someone has managed to figure out a way to peek at the other side's hole cards.

Denninger: Is This Statistically Reasonable?

A guaranteed win for Goldman means a guaranteed loss for someone else -- the pension funds, mutual funds, 401-ks, and so forth held by the Vampire Squid's many victims. Some people have taken to calling this the "Goldman Tax."

Some of Goldman's methods have become clearer with the recent unveiling of various computerized "high frequency trading" methods, some of which include what amounts to advance knowledge of orders, allowing the effective equivalent of that ancient (and officially illegal) stock-market scam known as front-running. The blog ZeroHedge has become the go-to resource for information and investigation into these matters.

A recent estimate of the total profits from these various techniques is $15-$25 billion annually, although more recent data suggests this could be low. How much of that is Goldman alone? They don't have much competition these days, especially as Bear Stears, Lehman Brothers and Merrill Lynch have died of mysterious causes.

Goldman itself said that this activity is mostly via participation in the SLP program:

The NYSE report that Zero Hedge discussed shows Goldman Sachs trading over 1 billion shares in the principal program trading category. What the table doesn't show, but a deeper look at the numbers reveals is that the vast majority of this total is trades by our quantitative trading desk. This desk is participating in a relatively new NYSE program called Supplemental Liquidity Providers.

Goldman now controls 50%-60% of principal program trading on the NYSE, and more via its domination of "dark pool" trading via a vehicle called Sigma-X.

Here is a typical weekly report on principal program trading, from the week of April 20: 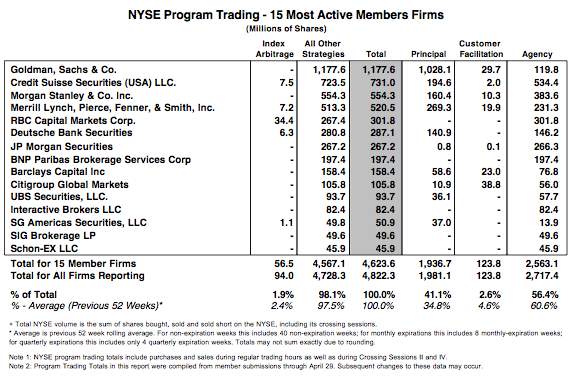 Is this suspicious? It gets better: on June 24, the NYSE said that it will discontinue its release of program trading statistics.

I wonder why they did that.

In the resulting uproar, the NYSE released the data, but with Goldman Sachs' figures omitted.

The NYSE later claimed it was an error. Yeah, sure it was. Sometimes you just have to laugh at this stuff.

Here's more info on what's been going on, via Whitney Tilson:

I might even suggest, as a hypothesis, that this whole SLP program was introduced as a way for Goldman, which needed a big dose of money quick, to fleece the general investor and replenish their coffers.

When it was launched in November, Goldman was the first participant. Here's how it looked then, with the actual headline:

We've also seen that the NYSE appears ready to do Goldman's bidding, as indicated by their willingness to make the program trading data disappear altogether when it becomes embarrassing.

We've seen that Goldman is by far the dominant entity in this program. Which suggests that it was probably invented by them.

Lastly, it has been a Wall Street rumor for years that Goldman's proprietary trading desks made money by front-running their own customers. Why not front-run the whole world?

I don't know if any of this is true, but when the world gives you a pair of twos, it is only natural to put them together and get a four.

Disclosure: the author has a short position in Goldman Sachs (GS)