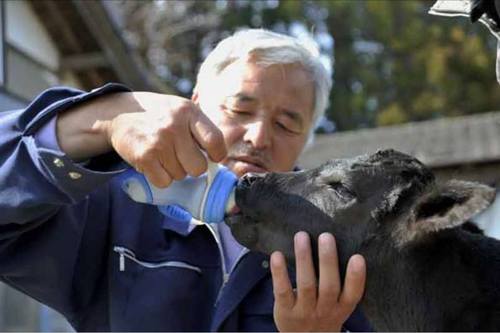 The Plumfund Story: Naoto Matsumura, the Guardian of Fukushima's Animals
When I first read the story of Mr. Naoto Matsumura, it moved me deeply. Mr. Matsumura has dedicated his life, and sacrificed his own health, for the plight of abandoned animals left to die after the devastating 2011 Tōhoku earthquake and tsunami hit Japan. Despite the risk of radiation exposure to himself, he's returned to the abandoned radioactive zone to tend to these animals in need: animals that were abandoned and left to die. As an animal advocate, I was inspired by his sacrifice. In my mind, he is a hero, and his acts of complete selflessness, kindness and generosity is rare to hear these days. I had never heard of someone who would put animals before themselves and his story hit me in my core!

Over the summer, I was reading the news as I usually do on Sunday nights, and came across a VICE article by Tomo Kosuga from 2013 called 'Radioactive Man'. I was immediately pulled in. The story was about the Guardian of Fukushima's Animals, Mr. Matsumura. When the earthquake, tsunami and nuclear reactor meltdown struck in Japan's Fukushima prefecture, thousands of citizens evacuated the 12.5 mile area, and Mr. Matsumura was among them. He went south to stay with family, but because of radiation contamination concerns, he was turned away. He found the refugee camps to be overcrowded and provisions sparse, and so Mr. Matsumura decided to go home and check on his family's farm in Tomioka. What he found was a completely bleak and abandoned area, except for the pets and livestock who were left behind. Mr. Matsumura began feeding the starving animals and eventually decided he should stay and care for the animals that survived, even though it was a direct disregard of government orders. By staying, he was being exposed to up to 17 times the level of radiation that is considered safe.

The animals of Fukushima he cares for are many: dogs, cats, cows, ducks, ostrich, pigs, and a pony. One of the animals he rescued was a dog who had been trapped inside a cattle barn for a year and a half. It only survived by eating the flesh of cattle that had starved to death. When Mr. Matsumura rescued it, most of its fur had fallen out, but with his loving care the dog has made a remarkable recovery. I read on, digesting each devastating rescue story and by the end of the article I was in tears. I wanted to help this man.

I discovered that the only way he was able to continue his mission and take care of the animals was from donations. I scoured the web for a crowdfunding campaign, fund, website, any way to donate to help, but I kept hitting roadblocks. The only information I could find was a blog set up by one of Mr. Matsumura's followers with instructions on how to wire money to his Japanese bank account. This definitely was not an easy option, and I imagined that many people like myself who were inspired to donate would most likely not make it to their bank and wire the money.

I went into work the following morning and told my coworkers at Honeyfund/Plumfund about Mr. Matsumura, and that I wanted to start a plumfund for him. Everyone was equally moved and we immediately set up the Plumfund page where all donations would go to Mr. Matsumura's bank account.

Plumfund in Action: Feeding the Cows
Once the fund was ready I reached out to every news outlet and reporter that had written about Mr. Matsumura. They graciously posted our link and as a result we have raised over $13,000 for him and his animals. Donations keep coming in, and we wire the funds to Mr. Matsumura's Japanese bank account. Mr. Matsumura and I are now Facebook friends and message each other every now and again. After the first wire transfer for $5,000 was sent, Mr. Matsumura responded and simply wrote "Thanks very much for your help. Every dollar goes to my cow's food. They thank you as well." My boss Sara and I both cried tears of joy! We were so thankful that we were able to help this wonderful man and his mission. Getting to know him and learning more about his life and story has moved me deeply, and has instilled an important lesson in my life. It has reminded me that giving and generosity really do make a difference! On the seemingly tough days, I often think of Mr. Matsumura's kindness, sacrifice, and devotion and it reminds me to be a better person. To look at the glass as half full, appreciate all that I have, and continue to give.