Earlier this month, men armed with an AK-47-style assault rifle and a 40-caliber handgun ambushed a backyard cookout in a community near Pittsburgh. The shooters killed five people as well as a woman's unborn child. A mother lost three adult children and two nieces in the attack. An agent with the federal Bureau of Alcohol, Tobacco, Firearms and Explosives said: "It was like a military (operation), like when I was in the Marines. That's totally what it looked like."

This was one of 15 lethal mass shootings that have already occurred in America this year, based on the federal definition of a mass shooting as one with three or more victims killed. These horrific killings are now occurring on a weekly basis in our nation.

Here's another fact that's important to mention in the context of America's gun violence epidemic: The victims of this mass shooting were black. And it's also a fact that in America, black men and women are far more likely to be victims of lethal gun violence. 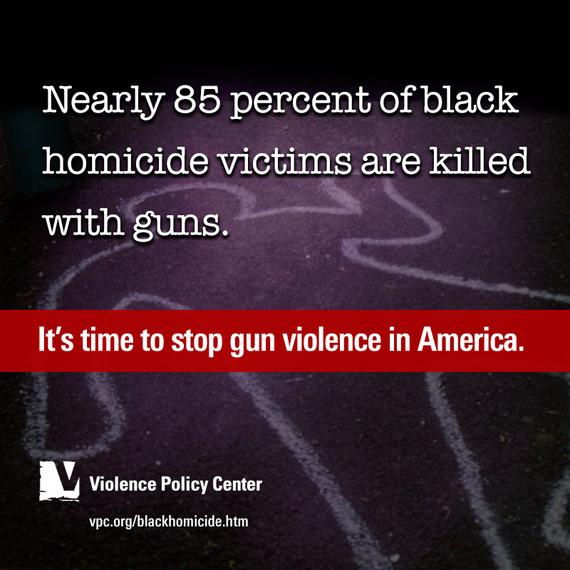 The Violence Policy Center, the organization I head, recently released the 10th edition of our annual study, Black Homicide Victimization in the United States. The study found that blacks represent 13 percent of the U.S. population yet account for 50 percent of all homicide victims.

And while mass shootings are particularly horrific, it is the daily toll of gun violence that proves most deadly.

As German Lopez notes in an article on our findings on Vox:

To put this in perspective, other developed countries like Canada, Germany, the UK, and Japan had homicide rates around or below one per 100,000 in 2013. The white homicide rate in the US tops even those countries' figures, but the black homicide rate is tremendously higher.

It's equally important to note that the overwhelming majority of these homicides are committed with firearms. In 2013, for homicides in which the weapon used could be identified, 84 percent of black victims were shot and killed with guns. Of these, 73 percent were killed with handguns.

When faced with the impact of guns on communities of color, all too often, there is a false assertion by some that homicides with African American victims are uniformly "gang-related" or connected to other criminal activity. However, our study found that when the circumstances could be identified, 68 percent of the homicides with black victims were not related to the commission of any other felony. Of these, 51 percent involved arguments between the victim and the offender. The study also found that when the victim to offender relationship could be identified, 72 percent of black victims were killed not by strangers, but by someone they knew.

Below is a chart showing the 10 states with the highest black homicide victimization rates in 2013. Pennsylvania, the state where the horrific mass shooting cited above took place, ranked sixth.

Every year, there are more than six thousand black homicide victims across the nation. That means six thousand people whose lives are cut short, who leave behind grieving families and devastated communities. Meanwhile, it remains absurdly easy to access the weapons used in the vast majority of these shooting: guns.

It is both alarming and unacceptable that black men and women, boys and girls, in America face a disproportionate chance of being murdered. We hope our research will not only help educate the public and policymakers, but aid those national, state, and community leaders who are already working to end this grave injustice.