Sean Penn takes a page out of the Liam Neeson book of machismo in this sterile international thriller about a Special Forces soldier-turned-assassin who commits a crime he can't live with. There's one key difference between the two actors' approach to action films: Neeson's have humane qualities. Penn, as a deadeye killer named Jim Terrier, is not all that lovable. Go figure. 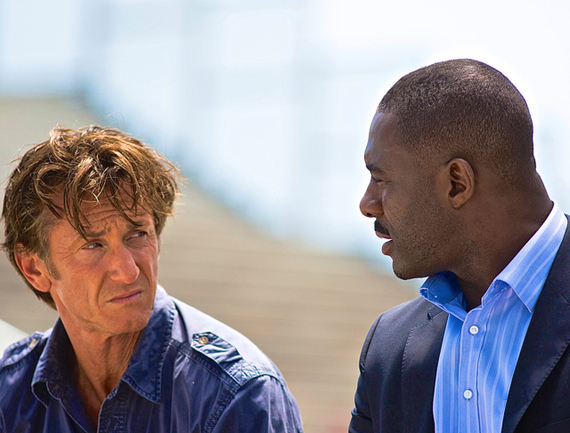 Somewhere in the Democratic Republic of the Congo, under the guise of an innocent contractor, Terrier is actually in cahoots with some devious people who are there to exploit the land for precious stones. When a government official, the Minister of Mining, gets in the way, he is done in. Terrier goes on the lam, leaving behind his foreign aid worker girlfriend Annie (Jasmine Trinca) and a sneaky friend named Felix (Javier Bardem).

Eight years later Terrier has changed his ways and is doing humanitarian work in Africa when thugs come hunting for him. That event drags him back to his old life, as he heads to London, Barcelona and Gibraltar to dig up old chums and find out who is trying to kill him. By the way, Felix has married Annie, and any references to the fox guarding the chicken coop are warranted.

Pierre Morel, the director of the original Neeson-starring Taken film, seems the perfect mentor for Penn, as the way-too-sober actor attempts to morph into an ultra tough guy. It takes a while for Penn's interpretation of Terrier to gel, and when it does we find him cold, detached, reeling from head trauma like a retired football player and not sympathetic. He shoots to kill, is an expert martial arts guy and his boxing skills are on point. Yet, his antics never excite you. Yes Penn is an Oscar-caliber actor, but this is not his best performance. However it must be duly noted, that at age 54 he is in the best shape of his life. Six-pack abs, cut shoulders, biceps the size of footballs and he is lean. Either he buffed up for the role, or this is the way he keeps a girlfriend like Charlize Theron.

The script, credited to Don MacPherson, Pete Travis and Penn, is based on a 1981 novel by Jean-Patrick Manchette. It's a serviceable story with the appropriate amount of bad guys, whodunits, plot twists, bombs bursting, guns flaring, etc. None of the suspense, thrills or action matches the sheer magic of the Jason Bourne movies, or the emotionally grounded Taken franchise. There's enough going on to keep the movie afloat for 115 minutes. You won't be bored. And when things do slow down a bit, Morel and cinematographer Flavio Martínez Labiano (director of photography: second unit Exodus: Gods and Kings) deliver some evocative shots of the dusty Congo, Spanish farmland or an artsy bullfight.

The Annie character is a weak, sexy, passive woman and Italian actress Jasmine Trinca (Saint Laurent) fails to lift the character off the page. This is a part that should have gone to Marion Coltillard; she would have known how to portray the angst of a woman left behind. Javier Bardem is tepid and crazed as Felix, but not impressive. British actor Ray Winstone as one of Terrier's confidants is fine. Idris Elba, in a brief appearance as an Interpol agent, shows more depth and command of the screen than all the other actors combined. In one scene he introduces himself to Terrier on a park bench. It's a short scene and the best acting in the entire movie.

The Gunman doesn't shoot blanks, but it is never fully loaded.