When one good habit triggers another, the speed of success doubles.

I can hardly remember what my mornings look like these days. It's taken years and much trial and error, but I have a routine now that needs no thought to be completed. Each action, all morning long, is pre-scripted, memorized, and controlled by habit.

I wake up and put my running clothes on. A 5-mile run leads to a shower, breakfast, and then my most important task of the day.

The same thing happens, like clockwork, every... single... day.

What I -- and many others, perhaps yourself -- have constructed is what I like to call a habit ladder -- an automatic process that quickly ushers you from a heap of barely-awakeness to a productive human being.

A morning routine is just one example of a habit ladder, though. The same concept can be applied across every aspect of your life to make the important actions you want to take quick and painless. And the trick isn't so much in what you do, but the order you do them in.

The Loop: How A Habit Works

Why do you bite your fingernails without thinking? Get distracted? Eat poorly? Likewise, why do you exercise without the slightest protest? Get your hardest work done first? Floss your teeth every day?

The answer is you've built a habit -- an automatic action that, once created, you no longer have to think about. It's your brain's way of offloading all the work required to get through the day.

And a lot of smart researchers -- particularly a group from MIT -- have figured out how your brain builds a habit. They call it the habit loop [1], and it works like this: 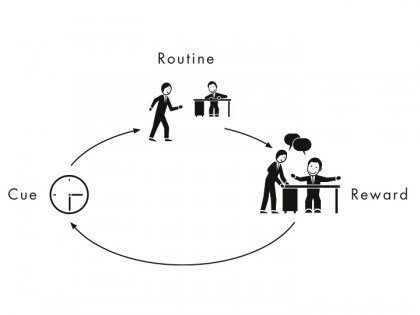 Take flossing, for example. It's a habit I recently picked up after being scolded by my dentist for the 25th time.

At the beginning of every habit is a cue. This is the thing that tells your brain, "Okay, it's time to start this habit loop." For me, the cue that it's time to floss is when I've finished brushing my teeth.

Once your brain spots a cue, you go into zombie mode; you're driven by your routine rather than conscious thought. I go directly from brushing my teeth to rolling a waxed string around my fingers without a pause.

And every habit ends with a reward -- the reason you're driven by the cue and routine in the first place. For me, it's the release of tension knowing my dentist won't frown as much the next time I see her.

Charles Duhigg explains the ins and outs of the habit loop in detail in his bestselling book, The Power of Habit.

Understanding this will help you identify and alter your existing habits, but there's another tool you can use to help you create new ones faster.

You know cementing a new habit is hard, but you probably have a few that came naturally. Take a hard look at those easy habits and ask yourself, "What was it that made them so easy to pick up?"

When I look at my own -- particularly my morning routine -- it's glaringly obvious. Each habit came easily because the beginning of one is triggered by the end of another. 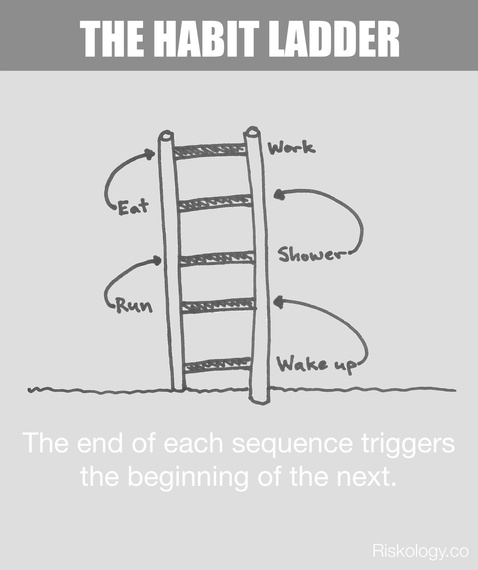 This is called a habit ladder because, from the time I wake up to finishing my first work task of the day, I'm leveling up one rung at a time. Each new step is reached because of the last.

The habit ladder doesn't just apply to a morning routine, or even just one day. I also use it in my writing tasks where each one I complete to finish an article spurs me on to the next. You could also use it to set yourself up early in the week for actions you know you'll want to take later but will be worn out if you don't put the triggers in place now.

If you're working to cement new habits but having a hard time, it could have less to do with the habits themselves and more to do with how they're arranged. Try looking at each from a perspective of the habit loop -- cue, routine, reward -- and find opportunities to rearrange them so the reward -- or tangential result -- from one helps to create the cue for the next.

Sources/Notes:
1. Excerpted and explained in detail in The Power of Habit by Charles Duhigg
2. Thanks to my friend, James Clear, for helping shape how I think about habits.