Hackers are big news! On October 2, a New York Times headline trumpeted: "JP Morgan Chase Hacking Affects 76 Million Households." Recently retailers like Home Depot and Target were hit as well -- data banks reportedly hacked, personal information potentially compromised. And who can forget Julian Assange and the infamous WikiLeaks? On a more personal level, how many of us have had our e-mails or Facebook accounts hacked? But are hackers always the bad guys?

Not according to a fascinating new documentary, The Hacker Wars (THW) by Vivien Lesnik Weisman, a critically-acclaimed filmmaker.

THW will have its New York premiere (Oct. 17) just a week after Citizenfour, the documentary about NSA whistleblower Edward Snowden, by Oscar-nominated director Laura Poitras, played at the New York Film Festival. Of the two, THW is clearly and undeniably a youth-driven doc -- fast-paced, hip, loud and unrelenting. For the painfully un-hip, like me, THW serves as an enlightening exploration of jailed, formerly jailed or about to-be jailed "hacktivists." It forces us to challenge our assumptions. It makes us question what appears to be on the surface little more than criminal mischief. Could we be wrong?

First of all, we are told, there's a big difference between a garden-variety hacker and a "hacktivist." The film defines a hacktivist as a person who uses technology to effect social change. And in THW we are introduced to a rogues's gallery of them. They include Andrew Auernheimer ('weev"), Barrett Brown, and Jeremy Hammond, number one on the FBI's cyber-criminal list. There are also cameos by less-known hactivists' friends and girlfriends of hactivists journalists who cover them and even attorneys who defend them. And thrown in for good measure, NSA whistleblowers like Thomas Drake -- in many ways the original Edward Snowden. Employing guerilla-style camera work, vivid graphics, quick edits and even "dubstep" electronic dance music, the The Hacker Wars is a mind-bending thriller.

THW illuminates the private demimonde of these so-called "freedom fighters." And why do they do what they do? Under the U.S. Patriot Act (especially in the wake of 9/11) the government was given wide latitude to conduct surveillance and gather intelligence.

THW argues that the privacy of ordinary, lawful citizens is being compromised too. So the hactvists, THW maintains, have been forced to become warriors. These cyber-soldiers expose the flaws in government and corporate security systems. Their weapons are their laptops. THW tells us "Big Brother" is on the attack -- against us! So hactivists fight back. As the film's tagline proclaims: "The War Has Already Begun!"

In THW we see first hand how these nerdy sleuths champion political ends -- namely free speech, human rights and information ethics. And the camera is never still. Lesnik Weisman manages to avoid using even a single shot of a "troll" hunched over a flickering computer screen. We get action instead. THW shows us behind-the-scenes, fly-on-the wall unguarded moments. These hackers antagonize big corporations and especially the government, leading to crackdowns. "Anybody who has that moral independence to defy the state is a target," explains former Pulitzer Prize-winning New York Times correspondent Chris Hedges. "Any information that challenges the official narrative can put them in prison," he says. Auernheimer found out the hard way. If anyone is the protagonist of THW, it's 28-year-old weev. A New Jersey court sentenced Auernheimer to 41 months in federal prison for exposing a security flaw on an AT&T website. Auernheimer handed over 100,000 iPad email addresses to the website Gawker -- in the process embarrassing AT&T. His conviction and three year prison sentence were overturned in 2014. "We are taking back the freedoms our forefathers assured us through technology," says Auernhiemer. "We can't allow these freedoms to be taken away. "I will put my body on the altar of liberty again and again and again."

Throughout the movie we see Auernheimer in the days and hours leading up to his sentencing. He hangs out with friends, drinks beers and makes fun of his impending jail time. "No, I'm not scared to be going to prison. I'll be making life-long future friends, future business partners really," he jokes. The lightning-paced film picks up even more momentum as the hours to his sentencing turns to minutes. We see weev and his pals sing Freddie Mercury's "Bohemian Rhapsody," the lyrics fitting weev's fate perfectly: "Goodbye everybody, I've got to go, Gotta leave you all behind and face the truth." As we see him the morning of the sentencing, there are hugs and good-byes. "I'm going to prison for arithmetic," he screams. It's one of THW most emotional and satisfying moments.

Besides weev, we meet Barrett Brown, journalist and propagandist for the "hactivist" collective known as "Anonymous."

We also get to see sound-distorted videos from the group showing shadowy figures in creepy masks calling for defiance against the government. We see how Anonymous has figured in the noted "Occupy" protests. We learn more about Jeremy Hammond ("Anarchaos"). And THW tells us about the uber-hacker-turned-FBI informant who ran the FBI's own cyber unit for many years. THW also raises questions regarding the U.S. government's practice of outsourcing intelligence work. "I want to take you into a subculture few people have access to," explains director Weisman. "The Department of Justice is coming down on them (hacktivists) because they expose the inner workings of the state."

THW is an exhilarating tumble down the Alice-in-Cyberland rabbit hole. The younger generation knows the cyber-world like the back of their hand. To them, THW will impart a valuable lesson and prove highly entertaining as well. To everyone else, the documentary should be an eye-opener. THW shows us how these front-line warriors are transforming conventional acts of defiance into a different kind of warfare that is both visionary and unyieldingly compelling. Hactivists are redefining civil disobedience in their own uncompromising way.

THW will premiere October 17th at the Village East Theater in NYC and run for a week. For tickets click here or visit the thehackerwars.com 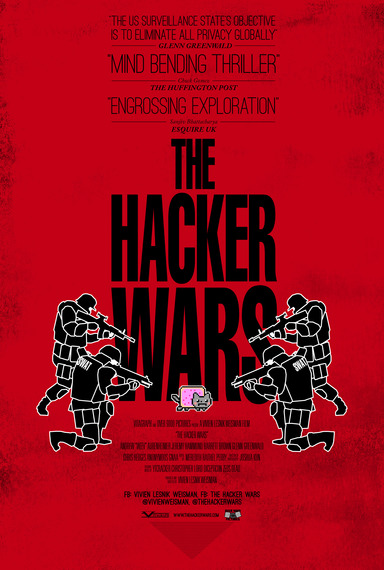