Jim Marshall's success as a photographer can be attributed to his insistence on one non-negotiable term from his subjects:

"He'd rather not be paid and not eat than not have total access," says Amelia Davis, his former assistant. 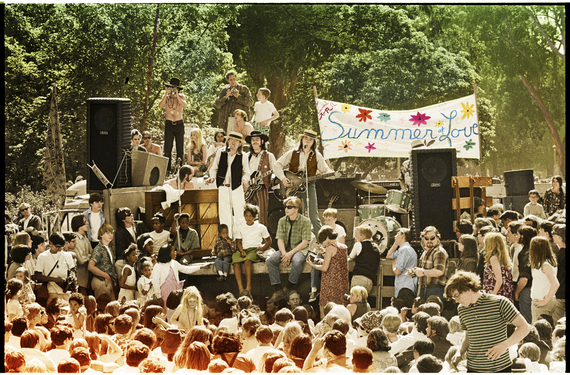 The Charlatans perform in the Golden Gate Park , 1967

A number of his heretofore unseen photos are about to be published in a new book from Insight Editions, called The Haight: Love, Rock, and Revolution. It includes more than 300 color and black-and-white photographs that he shot in and around Haight-Ashbury from 1965 to 1968.

Marshall shot anti-war protests, civil rights marches -- and musicians. He'd gotten his start in North Beach, taking photos of the Beat poets from City Lights and jazz musicians like John Coltrane and Miles Davis. When the counter-culture moved into Haight-Ashbury, he was with them. 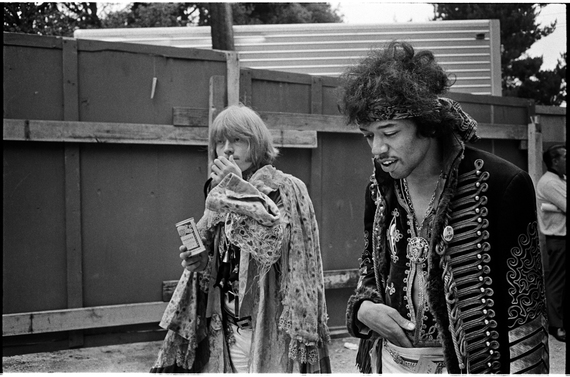 Brian Jones and Jimi Hendrix backstage. All images from the Monterey Pop Festival, 1967

There, he was shooting the Byrds, Bob Dylan, Janis Joplin, Jimi Hendrix, Jim Morrison and the Doors, along with Grace Slick with Jefferson Airplane.

And the Beatles, in what turned out to be their last public concert at Candlestick Park. With his Leica rangefinder and a 30 or 50 mm lens, Marshall was essentially part of their entourage, shooting them when the group landed at SFO, in the locker room at Candlestick, then onto the field and the stage. 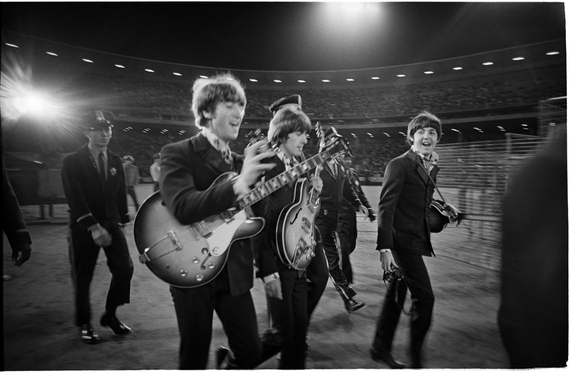 The Beatles walking to Candlestick stage, 1966

"He sees them as human beings, not as icons -- they're doodling, talking and drinking tea in the locker room," she says. "It's amazing that he has all of that."

Unlike other rock & roll photographers, Marshall wasn't satisfied with a single shot. He wanted the fashion and the culture surrounding his subjects, and the whole look and feel of the band and its ethos.

"He'd befriend musicians and get the shots -- they knew if they allowed him into their inner circle, he would never compromise them and publish a bad shot," she says. "Sometimes they'd forget he was there." 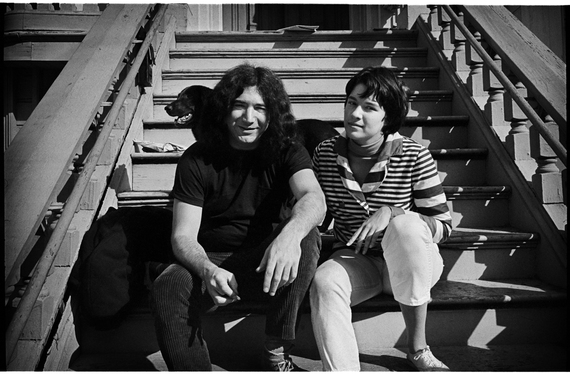 Jerry Garcia and Mountain Girl on the steps of 710 Ashbury Street, 1967

Marshall raised the bar for photographing musicians -- and defined that genre of work.

"The music was a metaphor for the times he lived in, with the racial unrest and the anti-war movement," says Joel Selvin, the bestselling music journalist who provided the narrative for The Haight. "He chronicled this incredible undercurront of our culture, through music."

Moreover, he was able to translate a vision of an era into a telling series of images. "As we get further way from his lifetime, people will start thinking of him like Henri Cartier-Bresson -- a chronicler of his age," Selvin says.

Along those lines, it's only appropriate that the introduction to Marshall's work in The Haight be written by Jorma Kaukonen of Jefferson Airplane.

For more on The Haight, go here.

J. Michael Welton writes about architecture, art and design for national and international publications, and edits and publishes a digital design magazine at www.architectsandartisans.com, where portions of this post first appeared. He's also the author of "Drawing from Practice: Architects and the Meaning of Freehand," due out from Routledge Press in the spring.