Let me tell you about my town. Every summer thousands of people flood in from all over the country to get a taste of "The Hamptons" lifestyle. The roads clog with motorists, the stores fill, and money flows.

However, as the number of vacationers grow, the number of year-round residents and local businesses shrinks. One would think that this mass influx of people would result in a boost to the economy, but over the years, only the service sector has really survived--but the cost of living is becoming increasingly difficult to meet.

The divide between rich and poor in my town is a microcosm for the country as a whole. I doubt that anywhere else can such a concentration of extreme wealth be found. As more and more people are forced out, and properties bought for second homes, the year-round population in East Hampton has consolidated in an area known as Springs where in many instances multiple families share single story houses. People work several service jobs just to get by. Also, like the rest of America, the poorest pay the most in taxes. (School tax is the highest in the most densely populated areas.)

Another part of this seasonal migration are big corporations; fashion companies like Elie Tahari, Ralph Lauren, and other luxury brands now occupy the storefronts that used to be home to local businesses. Pop-up shops come and go with the summer. For nine months out of the year, East Hampton is a ghost town with most of Main Street (and Newtown Lane) closed down.

Recently the popular cab company Uber came to the East End to meet the demands of the thousands of tourists and locals who like to go out and consume alcohol. Considering that there are only 300 local cabs in East Hampton, it would seem a welcome addition to the area.

However, along with Uber came a new batch of problems. Because Uber "partners" are not licensed cab drivers, and they drive their own cars, the company is able to deny responsibility for their behavior. Since Uber's introduction to our town, these unlicensed cabbies have been sleeping in their cars, taking up parking spaces which are few and far between in the months of June through September, and committing offenses they do not pay for. Uber had initially told its drivers it would cover their tickets once it established a local office, but it never did set up shop (because the market for their services is seasonal). Just recently an Uber driver was pulled over and arrested for drunk driving!

But the drivers are not the only problem. Uber is part of a larger trend of commercialization that is behind the loss of community in "The Hamptons." This trend also includes the expansion of helicopter services at the local airport. My home is being turned into a playground for the rich and famous; a served and server economy where the latter eventually lose their homes and are replaced by seasonal workers.

This is the side of "The Hamptons" that doesn't get talked about.

So finally, after numerous complaints by local cab companies and local residents, the Town Board enacted a law aimed at curbing the taxi problem. Said law required all licensed cab companies to have a headquarters in the town. In rebellion against the tighter licensing requirements, Uber, not willing to commit to 12 months out of the year, ceased services in "The Hamptons" altogether, and launched an aggressive social media campaign imploring people to flood the Town Supervisor's office with calls demanding the law's repeal. 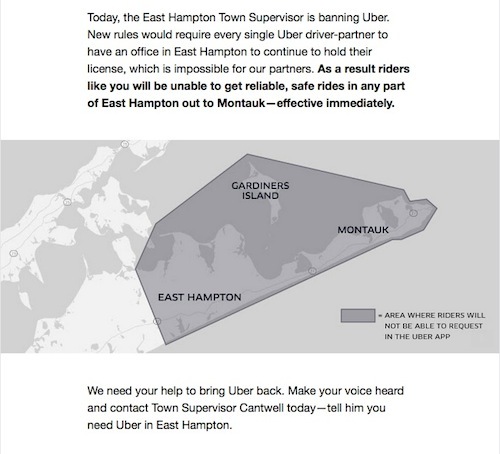 Uber sent out an email blast which claimed without their services, there are no safe cabs in East Hampton. I find this position ironic considering that the local cab companies have never had an issue with sexual assault, and Uber is plagued by it. In fact, New Delhi recently rejected Uber's taxi application because of this problem. There are also roughly 300 licensed local cabs still in operation in East Hampton, which means that while patrons may have to wait longer for a ride, they can still get one. Longer waits do not justify getting behind the wheel drunk.

Uber's campaign also extended to Twitter. People from all over the US began to tweet at the Supervisor and other members of the board, claiming without Uber, drunk driving would increase, and the blame rested with the town. In addition, news sources like VOX and Business Insider released slanted articles, and by that I mean heavily featuring pro-Uber quotes, about my town's decision to crack down.

The problem with the safety argument is that there is no evidence that Uber actually reduces incidents of drunk driving. Uber does make this claim in a report it released, but the data only shows a correlation: lower instances drunk driving crashes in the under 30 population in cities with Uber. What was not demonstrated was whether or not the under 30 population were in fact Uber users.

Nevertheless, it seemed everyone from CEO's to TED speakers have come out against our town's law. Money truly does speak for money, and standing up against corporate greed isn't held in high regard when the service is convenient. However, this battle is worth fighting.

I can say from where I am standing, our town took a major step towards curbing the destruction of what is left of our community.