Rumor has it that in early November, on the sidelines of the big, Asian regional economic meeting called APEC China's President Xi Jinping and Japan's Prime Minister Abe Shinzo might shake hands. 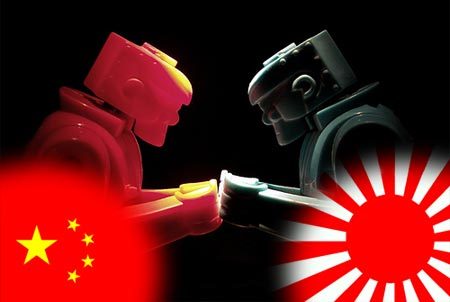 A far cry if so from last January during the World Economic Forum at Davos when Xi and Abe did not meet but nonetheless managed to make international headlines together by getting into a rhetorical slugfest through comments made separately to reporters summoning the specter of 1914. This added shot of World War I to the usual cocktail of claims and denials about World War II -- a blend of well-known issues such as the Nanjing Massacre, the Japanese military's system of sexual slavery, and the notorious shrine to war dead in Tokyo, Yasukuni -- skyrocketed Asia's collective blood pressure, which was tense already from the increased presence of government ships and fighter jets circling around the islands that China, Taiwan, and Japan each claims in the East China Sea: would shots be fired?

The good news is that none was, yet the frenzied levels of speculation now in Beijing, Taipei, and Tokyo and also among Washington's community of pundits and policy makers about a meet and greet that has not happened -- and which will leave no paper trail even if it does -- do nothing other than make clear that more needs to happen to move Asia forward than a potential 60 second photo op.

To many outside this insider game who are concerned with real and pressing international problems, it is understandably preposterous that the leaders of the world's second and third largest economies could avoid one another as Xi and Abe have during their respective two years in office, let alone make a point of it. The IMF's Christine Lagarde has long expressed her bewilderment: "The current status of the global economy needs both Japan and China fully engaged."

She's right, and her comments reveal today's untenable situation in Asia where quicksand undergirds the region's interactions, sparing only those who use historical events as cruise missiles to raise their domestic fortunes. This is true equally in Beijing and Tokyo and does nothing but drag the region backward and further obfuscate what actually happened. An added shame in Japan -- the perpetrator nation of the historical horrors -- deniers of the past openly denigrate the few, still-living victims of these ever-distant histories by hollowing out the truth of their lives during the remainder of them. 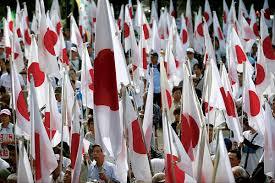 Those who would directly challenge this lose-lose game now, however, are forced to play by rules that define the past as full of whatever fact you need to stay in power while discrediting the ones you don't. As a result, even if Abe and Xi shake hands and say hello at APEC there is little to suggest that a widespread feeling of reconciliation will erupt throughout China and Japan. How could it? In the same breath, for example, that handlers on Team Abe leak the handshake's possibility they cannot promise that the prime minister will desist from visiting the Yasukuni shrine, an act whenever it may come guaranteed to infuriate literally billions of people regardless of how imbalanced any Chinese charge of militarism against Japan is today given its own post-1945 history.

It is almost 20 years since Japan's 1995 so-called Murayama statement named for then Prime Minister Murayama Tomiichi who delivered it and through which he acknowledged that Japan had "caused tremendous suffering to people in many countries, particularly to those in Asian nations through its colonial rule and aggression." Yet ongoing acts like Prime Minister Abe's December 2013 Yasukuni visit impel Chinese and Koreans and others to decry Japan's words as empty. 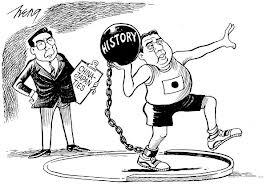 This self-perpetuating and damning cycle has now bred widespread apology fatigue among Japanese especially when China's righteous indignation comes hand in hand with fleets of warships. So what might it take from a Japanese statesman to put an end to this and redirect Asia's path forward?

Noticing what is absent in the handshake hype is instructive, which is mention of the twentieth century's most significant gesture of reconciliation: Willy Brandt's 1970 collapse -- the famous Warschauer Kniefall -- in front of the monument to the 1943 Warsaw Ghetto Uprising. 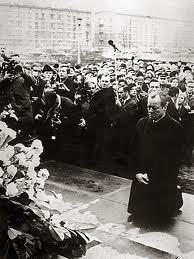 Much is made of the "Why can't Japan be more like Germany?" approach, which is as tiresome to most Japanese as Chinese demands. Significant here, however, is not the Japan/Germany comparison but rather the genius of Brandt's political act: it caught the world by surprise and captured the imagination of hope.

Contested at first, soon Brandt's kneel defined humility. Historically, it measures Europe's step away from its own cycle of punitive polemical politics.

Asians need a moment of shared hope on which to build, yet next week's precisely scripted, potential handshake has already negated the spontaneity that sparks such optimism. And if the men don't shake hands... watch out!

Outlandish to suggest, Prime Minister Abe might actually achieve what Brandt achieved not by offering his hand to President Xi but by bowing deeply to him.

Abe's personal outlook makes this highly unlikely -- if not wholly absurd -- and also arguably distasteful given that he has glorified men judged internationally as war criminals. What such a moment could accomplish, however, makes it worth contemplating. Xi would have to accept Abe's gesture, and it would become possible to imagine Asia's strongest nations moving forward towards the cooperation needed for real threats they share in common: global warming, loose nuclear weapons, and wild demographic shifts.

Mr. Abe, why not surprise the world?

Professory of History, University of Connecticut